How Inauguration Day played out in communities across the US 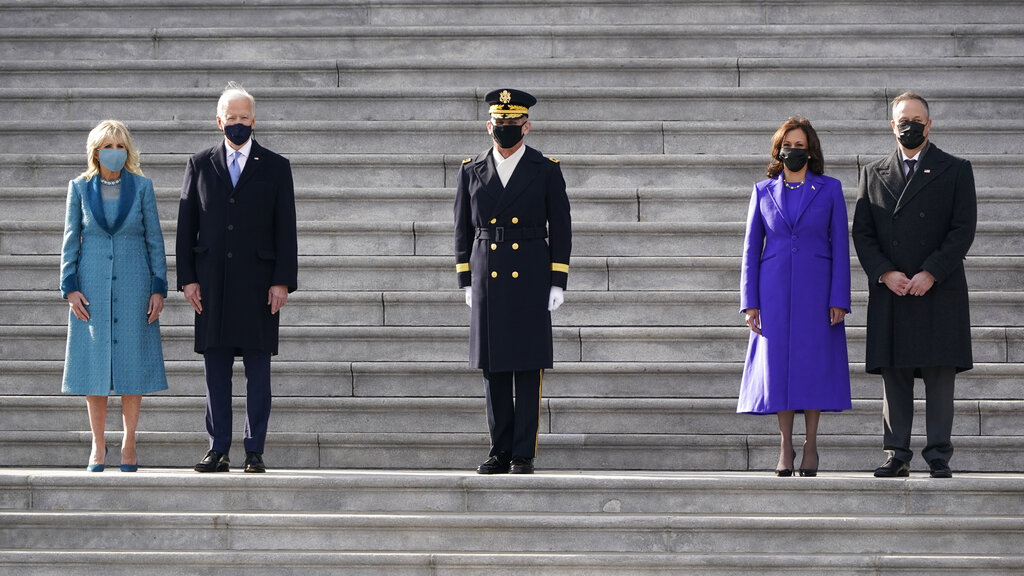 President Joe Biden and his wife Jill Biden and Vice President Kamala Harris and her husband Doug Emhoff watch a military pass in review ceremony on the East Front of the Capitol at the conclusion of the inauguration ceremonies, in Washington, Wednesday, Jan. 20, 2021. (Photo by J. Scott Applewhite/AP Photo)

Before and after Joseph R. Biden Jr. was sworn in as the 46th President of the United States on the same hallowed steps stormed by insurrectionists only two weeks ago, there was talk of the nation’s sheer possibility.

Americans across the union, such as those spotlighted by corps member Seyma Bayram and her Akron Beacon Journal colleague, celebrated the first woman–and mixed-race one at that–to ascend to the vice presidential office, Kamala Harris. As minorities nationwide confront endemic racism, they now also find unprecedented representation in the new administration, one which promises to be as diverse as the people.

The new administration faces an array of crises, including a pandemic and political extremism, a public resurgence of white supremacy and domestic terrorism. Yet as the new president put it, “Democracy has prevailed.”

Peace and reconciliation, Spokesman-Review’s Orion Donovan-Smith reports, are on the horizon, despite the odds.

But, President Biden also emphasized, “The battle is perennial, and victory is never assured.”

Its greatest weapon, he went on, is truth.

Journalists like Clara Hendrickson and Angie Jackson of the Detroit Free Press mark the first draft of the American story, doggedly representing the marginalized and oppressed, holding the elected and the powerful accountable, all to ensure the wheels turn between checks and balances.

It remains to be seen if America will “master this rare and difficult hour,” but the scale and insight of recent work by Report for America corps members nationwide offers a hint: It must keep going.

HERE ARE RECENT STORIES FROM REPORT FOR AMERICA CORPS MEMBERS THAT EXPLORE THE STATE OF THE UNION AS A NEW ADMINISTRATION SETTLES IN:

EXPLORE THEIR ONGOING WORK COVERING ISSUES FROM EDUCATION TO THE LOCAL ECONOMY, IMPACTING DAILY LIFE IN THE WAKE OF SEISMIC SHIFTS: