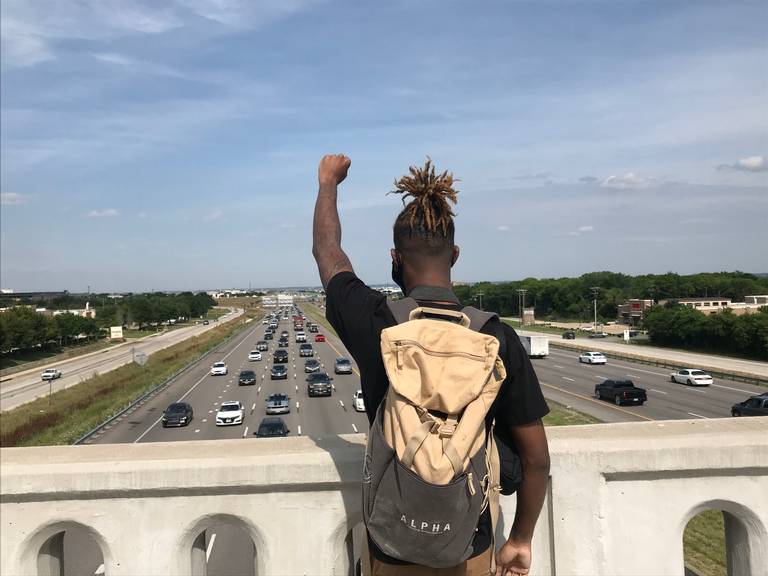 Damien Price raises a fist in the air on a bridge overlooking Interstate 20 in Arlington, Tex. on June 1, 2020. (Photo by Kailey Broussard/Fort Worth Star-Telegram)

ARLINGTON, Texas. — Pam Roach, after listening to residents share their experiences with racism and bias, had one plea: If they would like to see the suburban city better reflect their needs, get involved.

Roach and 28 other community advocates spent eight months hard at work studying inequities faced by residents of the city, bordered by Fort Worth on the west and Dallas on the east. Preliminary reports from the group, Unity Council — created by the mayor and the city council early last year to recommend means to achieve greater racial equality — found that Arlington is the eleventh most diverse city in the country, surpassing cities like Miami and Tucson, Arizona.

The same report, however, found that in 2017 the median wages for residents of color were at least $4 lower than their white counterparts.

“Arlington is a different community and we still have race problems,” Roach said. “Sometimes they’re very subtle, sometimes not so subtle, but we still have a problem.”

Wage was not the only disparity that Roach and her colleagues identified. People of color in Arlington experience greater housing and rent burdens, with nearly 30.3% of Latino homeowners experiencing housing burdens as opposed to 18.3% of white residents. Over 30% of Latino residents live without health insurance, compared to just over a tenth of white residents who are uninsured. And minority-owned businesses were found to be less likely to receive contracts for city projects.

After months of demographic research and interviews with residents, the Unity Council put forward 59 recommendations to address inequities in housing, health care, education, workforce development and policing. The most common solutions offered up included creating transportation programs, hiring chief diversity officials in multiple departments and creating a permanent board to examine disparities.

Assembled in June, the Council asked residents to share their reactions to George Floyd’s killing in Minneapolis and brushes with racism and bias in the city. The public input sessions come months after protesters in Arlington and around the world demanded police reform in response to the death of the unarmed Black man under the knees of a white police officer, Derek Chauvin.

Residents marched through downtown Arlington, to police headquarters and through shopping centers, holding up the names of local residents shot and killed by Arlington Police over the past several years. Former Arlington officer Ravinder Singh was indicted in September, more than a year after he shot and killed Margarita “Maggie” Brooks in the course of shooting her dog as it ran towards him. After shooting and killing 24-year-old Black man O’Shae Terry during a traffic stop, officer Bau Tran was fired from the city police department in May 2019 and indicted for criminally negligent homicide.

While Arlington saw protests, Unity Council Consultant Estrus Tucker said, he believes the city is better poised to confront racism and disparity than others in the region. Tucker, a longtime consultant on equity, diversity and inclusion training, played a similar role for Fort Worth as its Race and Culture Task Force drafted and delivered recommendations in 2018. City leaders have implemented some of the recommendations such as hiring a police monitor, forming a diversity and inclusion department and hiring a department director. Others have not come to fruition. Community leaders questioned the city’s refusal to create an independent commission to reshape Fort Worth electoral districts, which have been criticized for apparent gerrymandering that does not reflect the city’s racial or ethnic makeup.

In Arlington, Tucker said, more Council members seem invested in ensuring the recommendations they present in February are not the last of the conversation.

they are not Fort Worth,” Tucker said. “There is something about that audacity that I like because it shows a kind of pride in their city and that they want to be able to do things differently and they want to do things better.”

Jeff Williams, Arlington’s mayor, and City Council members lauded the group’s work, while vowing to enact as many ideas as possible.

“We have a responsibility here to address” these concerns and ideas, Williams said after the presentation.

Located nearly half way between Dallas and Fort Worth, Arlington’s population boomed during post World War II industrialization, as companies like General Motors established plants in town. The City that had fewer than 5,000 residents in the pre-WWII era, was home to around 122,200 people by 1978.

Tucker described Arlington’s approach to creating equity as proactive, whereas other cities’ responses may be more reactive.

“I wouldn’t say that they’ve done perfect–no city has done perfect–but the city of Arlington is positioned to approach it in a much more unifying manner than other cities in our region,” Tucker said. “That gives me hope.”

But the key to creating solid recommendations, Tucker and Roach said, was community buy-in.

After hearing from a handful of speakers during the Unity Council’s first town hall, Roach told viewers that she was tired. A longtime Arlington, Tex., resident, Roach has served on a myriad of city boards. She applied for the city’s planning and zoning commission after a proposal from the church she worked for, Mount Olive Baptist Church, was met with racist remarks and last-minute council decisions. In 2000, she ran for City Council.

The Unity Council, she said, is the most concentrated effort to discuss disparities plaguing Arlington, as city leaders have often invited, but not encouraged, people to join the discussion. Despite the mentality, she said, she applied and she worked on networking with the people who had long held decision-making authority.

“Arlington has had an agenda for so long and the families here are so old that you’re not going to come in and shake that stuff up,” Roach said. “You just can’t do that. You have to build relationships with these folks.”

All along the way, she’s urged people, particularly Black and African American residents, to pay more attention to local developments.

“We show up when something happens to us, but we’re not there and not willing to invest our time,” she said. “Some are, but not enough.”

Kailey Broussard is an accountability reporter covering Arlington, Texas for the Fort Worth Star-Telegram. This dispatch is part of a series called “On the Ground” with Report for America, an initiative of The GroundTruth Project. Follow her on Twitter: @KaileyBroussard