How changes within US Postal Service could affect voting by mail 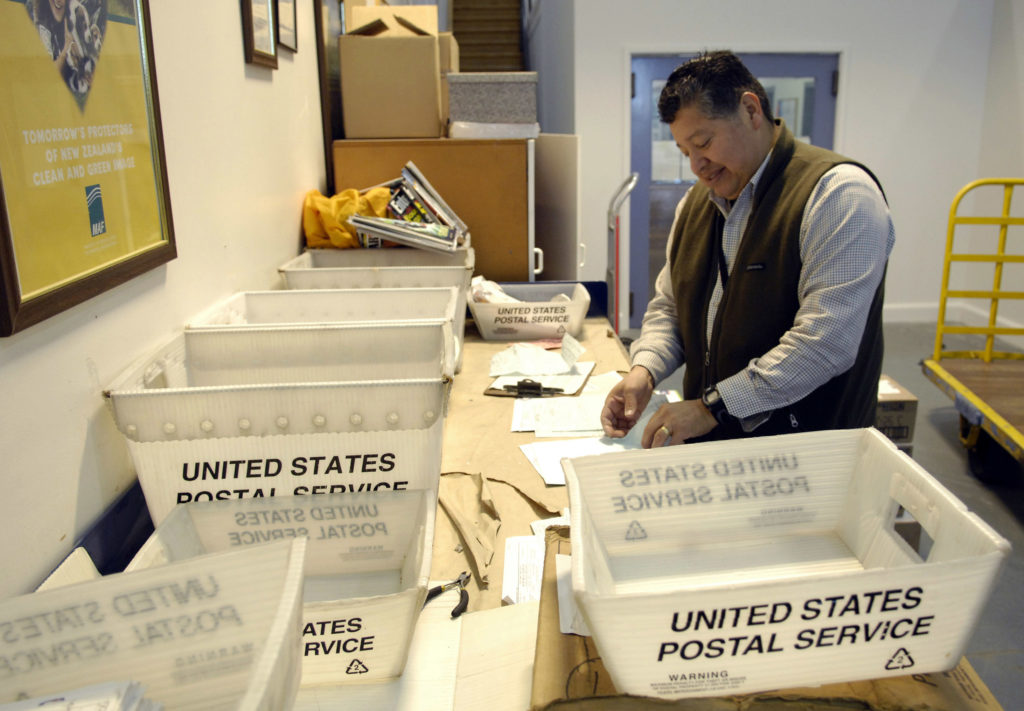 The changes implemented by the new Postmaster General Louis DeJoy could mean delay in the sorting and delivery of mail, which would affect mail-in voting. (Photo by U.S. Air Force/Wikimedia Commons)

A record number of Americans are expected to cast ballots by mail on Nov. 3 and the government agency responsible for delivering democracy is under threat like never before.

The U.S. Postal Service told 46 states and Washington, D.C. that it could no longer ensure mailed ballots would be counted due to delays in service. Many of the delays are the result of money-saving measures implemented under the leadership of recently appointed Postmaster General Louis DeJoy, a major Trump donor.

Among the internal changes at the agency, postal workers’ overtime has been cut, leadership positions reorganized and some postal boxes have been carted away in cities including Portland, Eugene and Missoula. Meanwhile letter sorting machines are disappearing from postal facilities, show internal documents published by Washington Post and Vice News on Friday.

“This isn’t older machinery, they’re just taking machinery out,” said Mike Stephenson, president of the Pennsylvania Postal Workers Union, which he says represents 20,000 workers across the swing state. “The pieces they’re taking out are the mail processing pieces that can do up to 30,000 pieces [of mail] an hour,” including election mail.

The 671 machines removed since June could reduce the sorting capacity of the agency by 21.4 million pieces of letter mail per hour, according to the Washington Post.

Stephenson said the official reason is “decreasing mail volume,” but remains skeptical. “You know what the actual reason is, and it’s not a decrease in mail volume.”

NEW: @jacobbogage got USPS data showing at least 671 USPS mail sorting machines have been removed across the country since June. Represents a reduction in national mail sorting capacity of 21.4 million pieces of mail per hour. https://t.co/6lOGfByZBC pic.twitter.com/FGV1nto0kn

The revelation comes a day after the president openly said he would block financial support for USPS because it would limit mail-in voting.

“Now, if we don’t make a deal that means they don’t get the money; that means they can’t have universal mail-in voting,” the president said during a televised interview on Fox Business Network. “They just can’t have it. So, you know, what a crazy thing. Very interesting.”’

The president walked back his statements later in the day, saying he wouldn’t deny USPS funding, but not before sowing doubt and requiring clarification from GOP leadership.

“The Postal Service will have the funding that it needs,” House Minority Leader Kevin McCarthy told CNBC. “We will make sure of that. We want to make sure we have an accurate election. I think any Republican that gets their ballot in the mail should vote and make sure their vote is counted.”

While bipartisan consensus on supporting the USPS is growing, access to mail-in ballots is being contested in courts and the Postal Service’s leadership is making it difficult for the agency to deliver and send ballots effectively.

Election mail expert Tammy Patrick told GroundTruth that the president’s public statements made clear that changes within the agency were part of a greater effort to disrupt mail-in voting, used by a growing number of states due to the pandemic.

“I try very hard not to ascribe motivations to people’s actions, but it’s hard to refute the results of people’s actions and how they play out,” said Patrick. “… And so when you have someone who says the thing out loud – that they’re probably not supposed to say out loud – then it’s pretty clear that the Postal Service is being undermined purposefully.”

“We have delivery standards that have been in place for many years,” the postmaster general said in a speech last week. “These standards have not changed, and despite any assertions to the contrary, we are not slowing down Election Mail or any other mail.”

But according to an internally circulated July directive, USPS made “immediate, lasting, and impactful changes in our operations and in our culture” under DeJoy’s leadership.

By cutting down overtime, the document entitled “Pivoting For Our Future” suggested that the agency could save around $200 million in transportation expenses related to late or additional delivery trips.

Patrick said it could slow down election mail delivery times.

“One aspect of these changes that may be difficult for employees is that – temporarily – we may see mail left behind or mail on the workroom floor or docks (in P&DCs), which is not typical,” the directive noted.

Nationwide, members of the American Postal Workers Union have been outspoken about how such policies will impact delivery.

“I want [customers] to understand that on the workroom floor, from the union’s point, we are out there fighting these changes every step of the way because we know they are wrong and we know they are a disservice to the American people,” veteran postal worker Lori Cash told the Washington Post.

Patrick said funding from Congress would help because USPS would be able to reinstate overtime, allowing for late trips and ensuring that ballots arrive at processing plants by Election Day.

While Patrick urged voters to educate themselves on what their state’s absentee ballot conditions and timelines are (here’s a resource), she said it was a “best case scenario” if voters sent their ballots in earlier than USPS has recommended, and in anticipation of potential delays – caused by policy changes or other variables.

“The reality is people are procrastinators,” she said. “So the worst case scenario is that people don’t; that people wait until the deadline.” USPS has long recommended that ballots are returned in the mail a week before they’re due. “That’s not even with any of the COVID impacts,” she noted.

While vote by mail has long been the default method in states like Colorado and Washington, voters in states like California, which implemented mail-in voting earlier this year in response to COVID-19, have experienced difficulty getting their vote counted. Data from California’s primary showed about 1.5% of ballots were rejected, according to the Associated Press – the largest disqualification of ballots in a statewide election in over a decade.

Patrick recommends voters return their absentee ballot request early and mail it as soon as possible. If unable to mail a good 10 days before Election Day, she said voters should opt to return ballots via drop boxes, available as an alternative to sending the ballot in by mail in some states.

If you’re in a state where you can postmark your vote, head to a post office and ask to have the ballot “round stamped” or “hand canceled.”

“You want to make sure it gets into their hands with a postmark on it,” she said. “So you want to ask for a postmark at the window at your local post office.”

This story is part of a reporting effort on voting rights in America presented with support from the Jesse and Betsy Fink Charitable Fund, Solutions Journalism Network and MacArthur Foundation.