How can the U.S. restore trust in its elections? 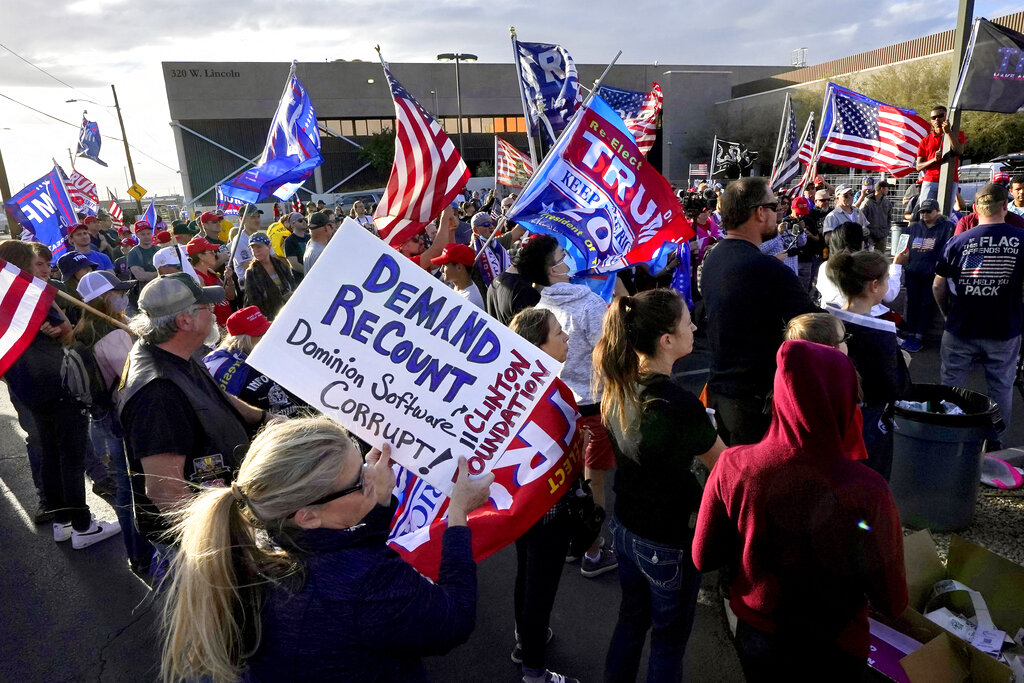 PHOENIX — In the newly designated “free speech zone” outside Maricopa County’s main ballot counting facility, a group of several hundred protesters, many decked out in Trump 2020 apparel, crowded towards a fence erected in front of the building on the night of Nov. 5, chanting:

The chant’s leader paused, then resumed, adding a twist that called out to President Donald Trump’s false allegation that some votes around the country were illegally cast.

Today, with not enough ballots left for Trump to come back in Arizona, protesters have turned their attention towards Washington, D.C. The major news networks have called the race for President-elect Joe Biden, but for some Trump supporters, the fight is not over.

In a country already deeply divided on issues of race, faith and economics, a new fault line has wound its way through the electorate. For decades voting rights advocates have pointed to voter ID laws, long polling place lines and voter roll purges as evidence of voter suppression. In this election cycle, a strident base of Trump supporters have embraced scantily evidenced claims from the president and his boosters that the mail balloting process has been rife with fraud.

The merits of these claims may not carry equal weight — as GroundTruth explored in our latest On the Ground podcast episode unpacking both issues — but both have the potential to significantly undermine trust in the election.

“Perception of integrity is fundamental to democracy — that people believe in the process itself and that it is producing a legitimate outcome,” said political science professor Lonna R. Atkeson, the director of the Center for the Study of Voting, Elections and Democracy at the University of New Mexico.

Before the election, just over half of Democrats thought it would be free and fair, according to a Politico/Morning Consult poll. That jumped to 90% after Biden was declared the winner and reports of Election Day voter intimidation and long lines were minimal.

Fraud claims, though, have been getting the heaviest air time over the past two weeks as Trump refuses to concede the election and Republicans file a flurry of lawsuits, many of which have already been rejected or withdrawn. Regardless of their success, they could continue to erode public trust. The same poll found that 70% of Republicans don’t believe the 2020 election was free and fair, up from 35% on the eve of the election.

Part of that flip is expected; what Atkeson called a “loser effect.” But the divide was visible even before the election in the ways people chose to vote — registered Democrats out-voted Republicans by a three to two margin during early voting according to the U.S. Elections Project, after Trump spent months trying to discredit mail-in voting — and has reared its head in contradicting protests as counting continues in several states.

The Arizona count-the-votes protests, which continued through Sunday in ironic contrast to conservative stop-the-count protests in places like Detroit and Philadelphia, was sparked by false allegations that polling place sharpies had invalidated a number of ballots. Most would classify that problem as vote suppression (legitimate votes prevented from being counted, as opposed to illegitimate votes being added).

One protester claimed via bullhorn that she had launched similar protests in 2018, when U.S. Senator Kyrsten Sinema, D-Ariz., beat out Republican opponent Martha McSally via a late comeback as mail ballots were processed.

“We had to settle for Sinema. We trusted the system to tally our vote the way we intended.” The protester directed attention to the vote processing center. “They are left wing commies. They are marxists. They have an agenda and the agenda is not a fair and honest election.”

Ironically, where McSally was hurt by the full mail ballot count, Trump has benefited so far. It was unclear whether the protester had also called for a complete vote count in 2018.

Atkeson said election trust stands to benefit most from the process playing out entirely, even if it means letting fraud arguments be heard and debunked.

During the last major election crisis — 2000’s Bush vs. Gore “hanging chad” contest — a group of protesters stormed an election counting facility in Miami-Dade County, Florida, demanding access. A large number of those protesters were eventually identified as Republican political staffers, and their business casual attire earned the event the pejorative “Brooks Brothers riots” moniker, in reference to a popular preppy clothing brand.

These protests were different. In Phoenix, protesters waved American flags and Trump 2020 in equal numbers and some wore graphic T-shirts emblazoned with the Punisher logo and references to the QAnon conspiracy theory. A few parents brought their children, some young enough to need strollers. As the night wore on, men with long rifles and tactical gear arrived to stand guard on a corner. One man wore a large, horned fur hat and carried what looked like a spear.

Conservative allegations of fraud in this election have largely been based on speculation and suggestion. Earlier in the day, conservative talk radio host Dennis Prager — broadcasting across the United States from Los Angeles — fielded a call from a man in Minnesota, who complained that stacks of blank ballots were kept at the polling place where he worked before admitting that they were as backstops for voters who had misplaced or ruined their mail ballots. In Phoenix, a man on a bullhorn called out to workers inside the building, beseeching them to stand up for their principles if they were being instructed to do something illegal. A postal worker in Pennsylvania who wrote in a sworn affidavit that a supervisor had tampered with mail ballots later recanted his claim in an interview with federal agents, then later claimed he had not recanted.

The 2000 election, as heated as the contest was, eventually led to the 2002 Help America Vote Act, which created new nationwide election standards and established the federal Election Assistance Commission. Regardless of the election winner, this divide over process feels deeper — at odds is not how well a piece of paper was punched, but the legitimacy of the voting process.

Atkeson, for her part, is most concerned about perceptions of fraud, and said that attempts to extend mail voting deadlines — and differences in policy across states — may have done more to hurt election trust than to enfranchise voters, even if many were motivated by public health.

“It makes people think, ‘what’s going on there?’ These are generous policies, but do they actually send signals of integrity?” said Atkeson. “We need to have some sort of national discussion on elections.”

Two Democrat-sponsored reform bills – H.R.1, which would install a slew of election reforms aimed at things like partisan gerrymandering, campaign finance and voter registration including and H.R.4, which would require some states to clear potential election policy changes with the federal government – have already been presented to at least address the voting rights side of the coin. Both passed in the Democrat-controlled House of Representatives in 2019. Neither have been addressed by the Republican-led U.S. Senate. Backers hope the renewed focus on elections – and a possible shift of control in the Senate – could give the legislation new life.

“Our democracy works best when everyone participates. The 2020 election revealed that our election administration system is broken and we need more uniform national standards to ensure that all voters have access to the ballot box,” wrote Leigh Chapman, senior director of the Voting Rights Program at The Leadership Conference on Civil and Human Rights, which has been lobbying on behalf of both acts. “While many people voted by mail, voters still faced hours long lines, polling place closures, and other unnecessary barriers to casting their ballots. Lawmakers, regardless of party, should care about making sure that we have a democracy that works for all.”

“There’s some good ideas on both sides. H.R.1 is asking for things like online, same day registration. Why don’t we welcome an ID requirement that checks citizenship?” she said. “Let’s get out of our trenches of voter fraud and voter suppression.”

But Trump’s strongest supporters insist something is amiss. In Phoenix, U.S. Congressman Paul Gosar has loudly backed the protestors, and made an appearance at the protest that Thursday night. Conservative activist Charlie Kirk visited the spot the next day, as did radio host Alex Jones, who has been banned from multiple social media platforms for his conspiracy theories.

That Thursday night, as many Trump supporters are today, protesters remained convinced that shenanigans were afoot. Between prayers, pledges of allegiance and chants of “count the vote,” protesters took turns on a bullhorn at the center of the crowd.

“The legal votes are what we’re here for,” declared one. “We’re standing to protect the greatest nation ever built.”

A nation, it seems, that increasingly doesn’t trust its most fundamental process.

Editor’s Note: Some language was changed for clarity, to specify the exact dates of the protest.