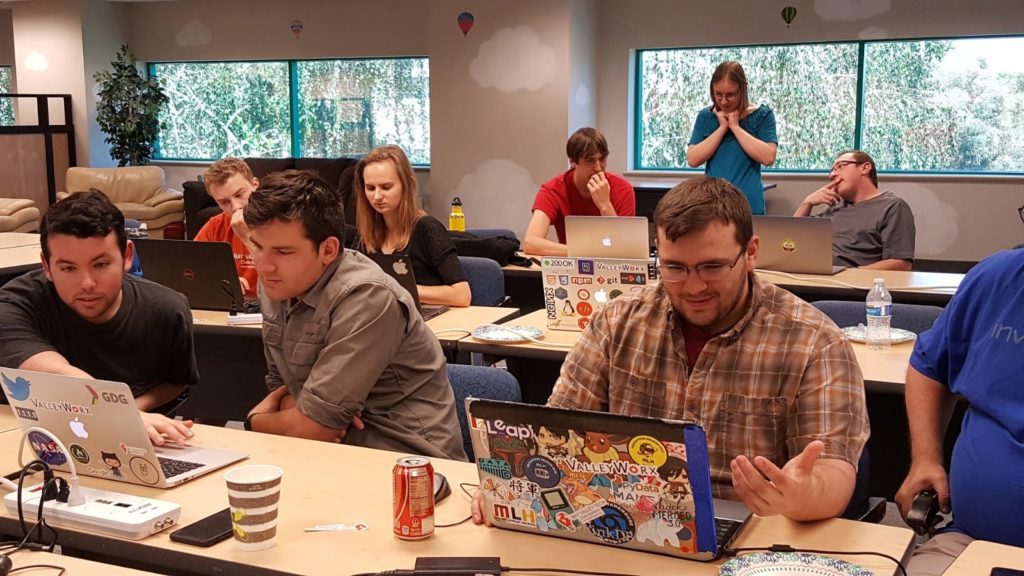 MODESTO, Calif. — Alejandro Alcazar had been working as a digital marketing coordinator for about a year when he discovered an interest in coding.

“I grew really interested in computer programming through messing with our [company] website and learning a lot about data science,” he said.

Alcazar has a degree in business administration but he wasn’t using any of those skills in his job. Still, he didn’t know enough about web development to secure a position in the industry. That’s when he learned about classes at Bay Valley Tech, a Modesto-based coding school.

The 24-year-old enrolled in early 2020, and, after completing the seven-month program, got a job as a business intelligence analyst for a local winery. In his new job, Alcazar said he’s using skills he developed at Bay Valley Tech to work with the company’s internal dashboards that show product and demographic data, as well as its search engine. His pay also increased: Alcazar said he’s earning over 30 percent more in his new role.

Workers like Alcazar aren’t the only ones wanting to capitalize on the benefits of the tech industry. Tech jobs are skilled and in-demand, so if a city can retain its tech workers, it can usually count on a boost to the local economy, and an influx of businesses and employees from other industries — like lawyers and accountants. But keeping tech workers local requires innovation and incentive, as leaders across Stanislaus County in California’s Central Valley are finding out.

Compared to other industries, the tech sector has stayed competitive in the face of the COVID-19 pandemic, which, after nearly a year of upending countless lives and sending the economy into a tailspin, is beginning to show its lasting effects.

Remote work has become the new normal, and the tech industry was quick to adapt, expanding flexible work policies into post-pandemic times. Now, whole office parks sit empty and both cities and corporations must grapple with the changing nature of office work and all the possibilities it brings.

Situated less than two hours east of the Bay Area, the Central Valley isn’t exactly known as a tech hub. Agriculture, logistics and manufacturing dominate the area; the region is home to the world’s largest commercial winery and countless farms that feed the nation. The workforce reflects that too — only 17 percent of Stanislaus County residents have a bachelor’s degree or higher, the latest available Census data shows. Given that, it may not be surprising that Modesto, the county’s largest city, has no four-year university of its own.

The “skills gap” in the workforce is only widening, and local officials are painfully aware. Local high schools and colleges have struggled to keep up as the economy evolves to favor more tech-forward industries.

As local talent pools dry up, Silicon Valley companies looking to expand have often picked other states like Texas and Idaho, instead of the county next door.

“There’s such a shortage of tech workers in the Bay Area right now that virtually every large tech firm has already expanded out of state looking for more talent,” said Phillip Lan, the co-founder of Bay Valley Tech, a local coding academy. “Unfortunately, the vast majority of them have stepped over the Central Valley, just because they don’t feel like there’s enough of a technical workforce here yet.”

Lan and his team are trying to change that. Bay Valley Tech offers free and low-cost coding classes to local students in a variety of web-based development languages, providing hands-on training through lessons, events like hackathons and networking opportunities.

So far, Lan said, Bay Valley Tech has trained over 150 students through its programs, and is on-pace to reach 300 in 2021. But his goals are set higher.

“Our strategy is that if we train enough people here in the Central Valley, that’ll start to get the attention of these larger tech companies like Uber, Airbnb and Google,” he said. “We’re looking to build out Bay Valley [Tech’s] expertise sector by sector.”

The strategy is workforce-forward, Lan said. While in the past, tech hub development depended in part on the physical infrastructure a city could provide — like Silicon Valley’s history of creating physical computer chips and Austin’s decades-long infrastructural support for its burgeoning tech industry. But with the pandemic’s new normal, and the majority of Silicon Valley’s big tech firms building virtual products, physical space is no longer at a premium.

Instead, Bay Valley Tech and other organizations in the Central Valley — Lan said there is a “healthy coalition” building in the region — are focusing on training employees who can accept remote jobs from Bay Area-based companies or work in satellite offices closer to home.

Daisy Mayorga leads the local chapter of Google’s Women Techmakers, aimed at providing community and resources for women in the industry. Beyond the support and “safe space” her group provides women and other underrepresented groups in tech, she said it’s critical that they are seen and heard by potential employers.

In addition to software, Modesto is upgrading its hardware too. The VOLT Institute, a local trade school focused on maintenance mechanics and mechatronics, recently acquired new technical equipment that will be up and running in a few months.

Kevin Fox, the director of marketing and student engagement at VOLT, said the pandemic has taught the staff that “upskilling” the workforce is crucial, especially in a time when employers are “just sort of desperate to bring anybody who is qualified with the proper skill set on to fill those positions that are vacant right now.”

He said the Central Valley has plenty of residents who are “hungry” for these kinds of opportunities.

“There are young people here that are just dying to get a good job and try something creative and useful,” he said. “Something that benefits a community.”

Kristina Karisch covers economic development for The Modesto Bee. This dispatch is part of a series called “On the Ground” with Report for America, an initiative of The GroundTruth Project. Follow her on Twitter: @kristinakarisch.