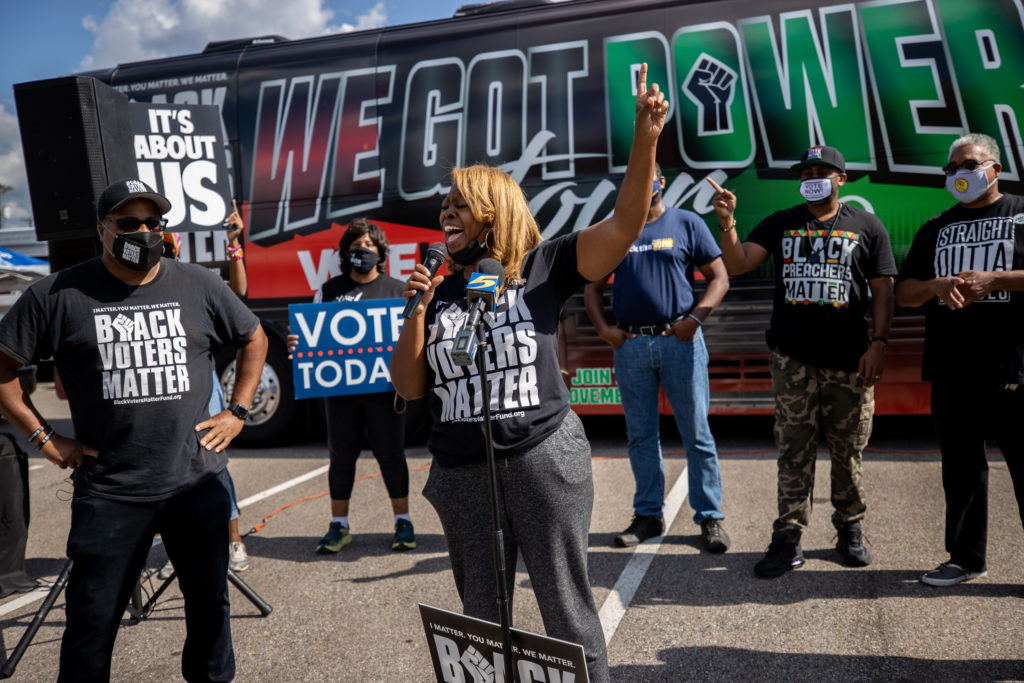 One hundred years after passage of the 19th Amendment, Vice President-elect Kamala Harris honored Black American women who “so often prove they are the backbone of our democracy.”

About 90% of Black women voted for President-elect Joe Biden over Donald Trump, making them Democrats’ most loyal bloc. For the past five presidential cycles, they have shown up to the polls at higher rates than any other group.

This year, experts say their nationwide voter mobilization efforts led to the historic turnout that secured Biden’s victory and that of the first Black, female vice president in the nation’s history.

But being the “backbone” of American democracy, an identity activists say is rooted in a history of racial oppression and gendered disenfranchisement, comes at a cost.

“It is a tremendous, magnanimous burden to bear,” said Black Voters Matter Fund co-founder LaTosha Brown. “There is a major price to pay there. While we are strong in the world — and I consider myself powerful — I have felt this culture doesn’t give me the grace or space to be weak, to be delicate.”

Black women have been the spearhead of social justice movements throughout American history. Although largely ignored in history books until the late 20th century, Black women were a driving force in the abolitionist movement in the mid 1800s.

Then, they led the fight to pass the Voting Rights Act in 1965, helping to abolish tactics of voter suppression that targeted Black Americans.

Since the 1940s, after Recy Taylor spoke out against the white men who kidnapped and sexually assaulted her, Black women have also led the charge in addressing sexual violence, paving the way for the #MeToo movement.

“The biggest barriers in this country are rooted in racism and sexism,” Brown said. “Black women sit at the intersection of that.”

As America’s most consistent voters carried on this legacy of organizing to a record number of Black American voters this election, leaders in the movement reflect upon a history of gender and racial oppression, attributing much of their success as activists and organizers to the strength and resilience borne from that shared lineage.

“Black women are acting at the intersection of so many different types of injustices that particularly affect them and their children,” said Alaina Morgan, an African diaspora historian at the University of Southern California.

“We never had the opportunity to be anything else but forward thinking survivors,” Brown said. “If we were not, we could die, our families could die, our children could die. Part of the culture of how we show up in the world is in response to our history.”

Brown, who sings soul music and is releasing her first album, Songs of the Souls of Black Folk, later this year, says she finds solace from the strain of the constant fight for justice through her art.

“If I didn’t have my own voice to soothe my tired soul, I don’t know what I would do,” she said. “For Black women, womanhood was never about being delicate, or soft, or being kept. Womanhood always meant work, and protecting your families, your communities.”

Black women’s hard history, the activist said, is part of what makes them successful organizers: “There is something about our humanity. Out of this pain comes a deep, deep sense of empathy and determination.”

“Black women are nurturers. We’ve been nurturers during slavery. We nurtured other children that did not belong to us,” said Brittany Smalls, Black Voters Matter’s Pennsylvania state coordinator. “It’s tiring, but I get my strength when I think about my family members, when I think about my great grandmother who actually picked cotton.”

Since March, Black Voters Matter Fund has partnered with more than 600 grassroots organizations to get-out-the-vote among the Black community in swing states and vulnerable counties, providing supplies, funding and strategic guidance.

In Pennsylvania, Smalls saw the direct impact of her team’s efforts when officials finished counting ballots in Philadelphia, which is 42% Black, and clinched the Biden-Harris victory.

“Women, but especially Black women, have a tendency to coalesce and rally around each other,” Brown said. “I’ve never seen the level of collaboration within the way that Black organizations worked together, even more than with President Obama.”

After hitting record numbers in 2004 and 2008, Black voter turnout fell nationwide for the first time in two decades in 2016, a decline activists attributed to a common feeling of dejection in the Black community. Their determination this year to rally around causes especially important to Black communities, like criminal justice and health care, turned the tide.

In Georgia, there was a 69% increase in voter turnout among women of color compared to 2016, according to She the People.

“For every Stacy Abrams, there are hundreds of Black women supporting her,” said Dejuana Thompson, founder of the Birmingham-based Black voter mobilization group Woke Vote. “That’s just how we do it and how we’ve always done it.”

Woke Vote, which focuses on Black voter turnout in 12 key battleground cities, launched in 2017 in direct response to the election of President Trump, to provide a solution to the “profound lack of resources and attention on Black voters,” Thomspon said.

In the two weeks preceding Election Day, Thompson partnered with Tamika Mallory and Linda Sarsour, founders of the racial justice organization Until Freedom. Together, they launched the State of Emergency Vote Tour to get-out-the-vote.

“It requires a certain level of trust,” said Thompson, citing the names of 20 women who her work depends upon.

In August, Thompson said her organization’s goal was to engage 250,000 Black voters to commit to participate in the November election. But through what Thompson described as millions of phone calls, text messages, hundreds of thousands of individuals on the ground, along with an unprecedented level of collaboration with other Black political activists, Woke Vote engaged more than 1.2 million Black voters in this election cycle.

From now until January, Woke Vote and Black Voters Matter Fund will run and support community engagement campaigns in Georgia’s Senate runoff election, focused on those who voted for the first time in the general election.

“When I look at movements before, there are so many unnamed Black women who were behind them. There’s an intentionality now to name ourselves, to say this leadership is not coming from some phantom place,” she said. “Even that is revolutionary.”

Megan Botel is a Poynter-Koch Media and Journalism Fellow with GroundTruth. This story is part of a reporting effort on voting rights in America presented with support from the Jesse and Betsy Fink Charitable Fund, the Solutions Journalism Network and the MacArthur Foundation. Follow her on Twitter: @meg_botel.

A version of this story appeared on USA TODAY on DECEMBER 2, 2020