ON THE GROUND IN EAST ST. LOUIS, IL

How an urban farmer in East St. Louis is advocating for food justice 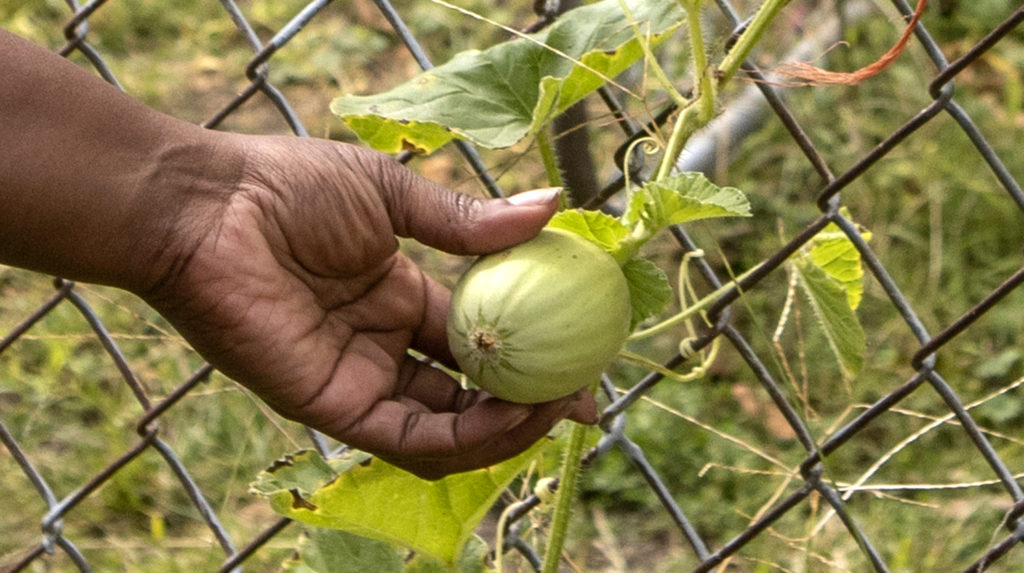 The coronavirus has caused challenges in 2020 for East St. Louis gardeners and entrepreneurs.(Photo by DeAsia Paige)

EAST ST. LOUIS, Ill. — On Monroe Avenue there are less than five homes. Vacant lots consume the beginning of the street, covered with tall grass that looks like it hasn’t been cut in years. Homes are positioned at the end and Kamina Loveless lives in the first one on the block.

The quiet is fine by Loveless, who for 12 years has used the vast empty land in her backyard to garden. It provides fresh food for people in the East St. Louis community, a food desert where nearly 40% of residents live below the federal poverty line.

“You could go back to 10 to 15 years,” Loveless, an East St. Louis native, said about the lack of food resources in the city. That’s why she wanted to connect people with fresh food. “The only thing around the corner is chicken and fries.”

East St. Louis is a small town on the banks of the Mississippi River in the Metro East region of Southern Illinois. The city of nearly 26,000 people, more than 96% of whom are Black, is just 15 miles from Ferguson, Missouri, which made national headlines after the police killing of Michael Brown Jr. in 2014.

The people who make up this city are particularly susceptible to COVID-19 because, in addition to being a food desert, East St. Louis lacks a hospital. The closest one, Touchette Regional Hospital, is in nearby Centreville. Of the 10 zip codes with the highest coronavirus cases per capita within St. Clair County, which includes East St. Louis, seven have a majority Black population, according to a Belleville News-Democrat analysis of Illinois Department of Public Health Data from March 1 to June 1.

Against the backdrop of these troubling conditions, East St. Louis is marked by residents aiming to build a better reality for their city, aptly nicknamed the “City of Champions.” Loveless is one of them.

Loveless started her garden in 2008 after discovering a greenhouse in Jones Park, a three-minute drive from her home. She started Gardens Devone Network Food to help people in the community learn about gardening. It’s the only one of its kind based in East St. Louis.

“I’m still here today growing it in a small section alongside the fence,” said Loveless, who now pursues urban gardening full-time after losing her job. Her goal is to make sure people know more about creating their own food resources. “Today, I’m teaching people to do this themselves not just to say I’m teaching them, but I want them to see what a sustainable lifestyle looks like.”

With her mom, Loveless grows a variety of fruits and vegetables in her garden, although squash is her favorite to grow because it’s the easiest. She’s working on building a chicken coop to house livestock.

“The work we’re doing is important, especially in teaching kids how to garden and use the land they have,” said Betty Loveless, Kamina’s mom, who’s retired. “They’re blessed times have changed and everything is so based on technology, but there’s going to be a time where we’ll have to rely more on land and gardening.”

Her daughter is determined to follow in the footsteps of her late father, who raised her family on a farm in nearby Brooklyn, Illinois. He passed away from cancer in 2015.

“I actually had the opportunity to experience firsthand what urban farming is and what a sustainability lifestyle is,” Loveless said. “I can recall going every other day to the hog farm by choice and being able to raise them, feed them, bathe them and everything. My dad showed me that with his hands and with his heart, so as times passed, I just carried that with me.”

Loveless’ dad moved from Mississippi to Illinois during The Great Migration. She said her dad took what he learned in the South and applied it to his farming at home.

“I remember being in high school and going to the store and comparing our fruits and vegetables to theirs and comparing their prices to ours,” Loveless said. “I couldn’t believe it. I told my parents that we didn’t need this because we were growing our own food. We don’t have to buy none of that because we have most of the stuff at our home. And people were buying it left and right.”

Loveless said she uses social media to identify the needs of different audiences and determine what to grow. “Right now, we only have one good market and that’s Neighbors’ Market in East St. Louis.”

“When Schnucks left before Gateway [Marketplace] got there in 2015, it was nothing,” Loveless said. “This town was ghost on State Street when it came to fresh food. I had a lot of people coming to me. My neighbor was getting a lot of squash and tomatoes from me. I was just disappointed. Like you’ve got to be kidding me.”

State Representative LaToya Greenwood, whose district includes East St. Louis, said she’s working with the city’s mayor and other elected officials to address the issue. In 2018, the Illinois Legislative Black Caucus, of which Greenwood is a part, passed HB3418 into law, which allows cities and counties across the state to establish urban agricultural zones in which residents can grow their own produce. Greenwood said she was able to allocate about $800,000 to East Side Health District in East St. Louis for its urban farming program along with expanding some of the clinic’s services.

Rep. Greenwood said the pandemic exacerbated some of the systemic issues that Black Americans face, which is why she, with the Illinois Legislative Black Caucus, released an agenda last month for reforms aimed at ending systemic racism in the state. The caucus’ agenda is based on four pillars of policy: criminal justice reform, violence and police accountability; economic access, equity and opportunity; education and workforce development; and health care and human services. Greenwood said efforts to alleviate food scarcity are a part of the economic access component of the agenda.

“We found that during this pandemic that those issues have surfaced even more for us, more so than other groups of people and communities,” Greenwood said. “So it’s definitely a priority for the Legislative Black Caucus, it’s definitely a priority for me, who was born and raised in East St. Louis and still living here, for all of us to have access to the nutrition that we need, especially for our babies and our seniors.”

James Burns, Loveless’ former neighbor, agrees that there’s limited options for people in East St. Louis to get fresh food. He’s been close with the family for nearly 20 years and frequently got his cucumbers and tomatoes from Loveless’ garden, where he often helps out.

“I mainly got it from her dad,” Burns, 60, said about where he used to get most of his food. “I used to get fruits, corn, beans, greens, okra and really everything. But before that, I would go to Schnucks in East St. Louis before it closed down or I’d go to stores in Shiloh or Freeburg.”

Burns, who now lives in Belleville, said he’s stepped in as a father figure for Loveless since the death of her dad.

“Whatever I can do for them, I do it,” Burns said. “Sometimes I cut the grass, help with the garden. I do whatever that’s required. The lack of fresh food in East St. Louis is why I didn’t mind helping her plant it and getting the garden together. She’s a workaholic.”

Loveless said that although she doesn’t have many people coming to her garden due to the pandemic, she’s grateful for the support she’s received from the community so far. She keeps busy by taking part in consulting neighbors’ gardens.

“Now, I know about the importance of land equity, now I know what it means to be an urban farmer. I appreciate my calling.”

As demands for social justice and an end to police brutality maintain momentum through the fall, Loveless views her works as especially important.

“When you’re talking about giving away food from my garden, you’re talking about people,” Loveless said. “And everyone comes with their own issues. And since the beginning of time, Black people have always had burdens laid down on them, and I want to help with that by advocating for food justice.”

DeAsia Paige covers East St. Louis for the Belleville News-Democrat in Belleville, Ill. This dispatch is part of a series called “On the Ground” with Report for America, an initiative of The GroundTruth Project. Follow her on Twitter: @deasia_paige