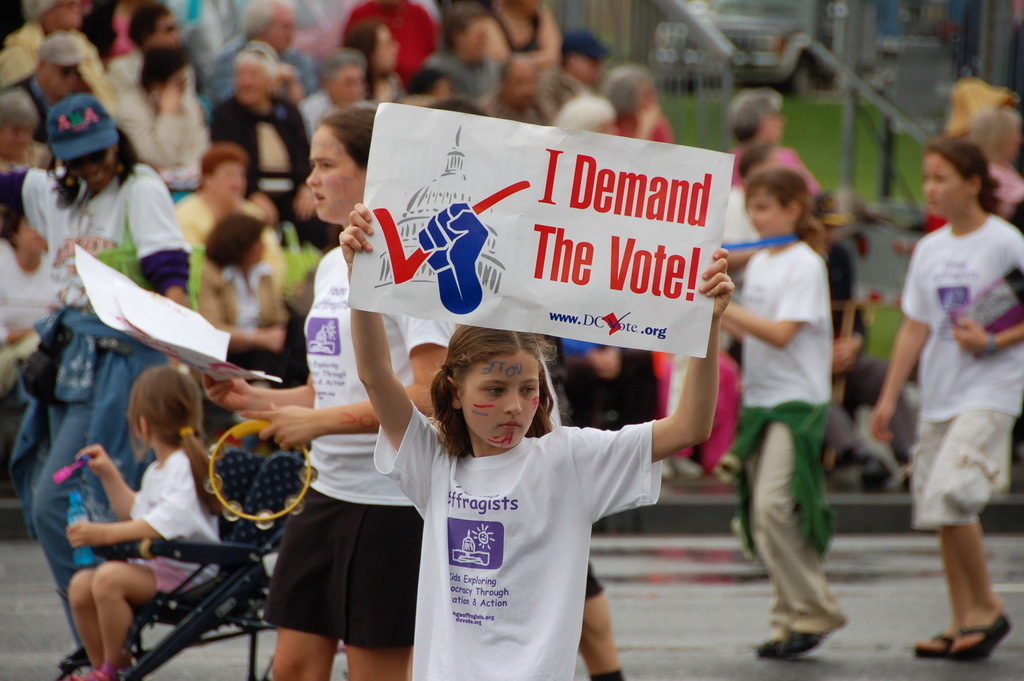 A young protester holds up a sign demanding voting rights on April 12, 2008. (Photo by Mark Poblete)

A flood of lawsuits and court rulings spawned by the pandemic is turning the November election into one of the most litigated and divisive in history. For more than 150 million registered voters — nearly half the population of the U.S. ⁠— these legal battles could determine how they will cast their ballots and whether those votes will be counted in upcoming elections.

While most voting rights cases remain tied up in court, others have already been decided in key states with rulings that lean towards voter suppression.

Justin Levitt, an election scholar and associate dean at Loyola Law School, is tracking over 150 pandemic-related election lawsuits across the country, many related to vote-by-mail, absentee voting and fraud. He said this will be an “exceedingly litigated election” for several reasons, including the ongoing public health crisis, an increasing sense of polarization and a desire to resolve voting rights issues before the presidential election is held.

“We have truly unprecedented circumstances,” Levitt told GroundTruth in a phone interview. “It’s the first time in a century that we’re going to try to hold an election during a pandemic. And we are only modestly equipped to run an election without litigation ⁠— even in normal times.”

Larry Sabato, a political analyst and director of the University of Virginia’s Center for Politics, said that court-imposed voting restrictions could have an impact on Election Day turnout, especially if mail-in-voting is not an option.

“Until the pandemic hit, we were headed to an enormous turnout this fall, mainly because of Donald Trump,” Sabato said. “No one feels mildly about him — it is either love or hate, and those emotions get people out to cast a ballot. Now, the turnout may be diminished because of the fear of going to the polls in person and, in some states, the lack of easy voting by mail.”

Related: A nation in strife births a new generation of leaders

Despite the high stakes, Levitt said that pending litigation ahead of the election is not necessarily a bad thing as courts will be able to decide contested issues before the result of the election also becomes contested.

“The more disputes we can get out of the way, the better off we are,” he said.

Marc Elias, the Democratic Party’s lead election attorney, is currently working on more than 35 voting rights cases in 18 states focused on making sure there are sufficient in-person polling sites, fewer restrictions on absentee voting and opportunities for voters to appeal if their ballots are rejected. In response, the Republican National Committee has filed or intervened in 19 suits to date, and pledged to spend at least $20 million to fight the Democrats in court and limit the expansion of voting by mail. An array of conservative groups have also joined the RNC’s effort by pledging money and launching TV and digital advertising campaigns to further their message.

The partisan nature of court decisions

Efforts to expand procedures to include mail-in-voting are deadlocked in many states, marred by deepening polarization around voting practices and pending federal lawsuits. With mounting pressure from President Trump to limit voting by mail, Republican governors and state legislators are unlikely to make voting by mail easier for the November elections.

Last month, a federal appeals court in Wisconsin reaffirmed voting restrictions favored by Republicans, rejecting the notion that the additional provisions led to discrimination against African American voters who may find it more difficult to cast a ballot.

Judge Frank Easterbrook wrote in his opinion for the court that “legislators are entitled to consider politics when changing the rules about voting.” His opinion also acknowledged that “race and politics are correlated [as] black voters are likely to prefer Democratic candidates.” Many believe that voter suppression in Wisconsin — a swing state ⁠— could be key to Trump’s victory.

“Judge Easterbrook seemed to indicate that it was proper for a legislature to make choices based on what would help them and hurt their opponents,” Levitt said. “And that’s not a political choice ⁠— that’s a partisan choice … based on either self-interest or partisan interest.”

“Once you open that door a little bit, it’s really hard to figure out how to shut it again,” he added.

The three-judge panel also declared emailing or faxing of absentee ballots unconstitutional, ruled in favor of restrictions on early voting and restored a requirement that residents live in a district for 28 days to be eligible to vote there. The ruling comes more than three years after arguments took place for a number of consolidated lawsuits on state election laws.

Democrats say these measures to limit the accessibility and eligibility of voters are an assault on democracy, placing politics over the right to vote, as a way to help Republicans get elected in November.

On July 2, the U.S. Supreme Court blocked a lower court’s decision to allow curbside voting in Alabama and eased mail-in voting requirements, with only justices appointed by Republican presidents ruling in favor of the restrictions. The conservative justices did not explain their reasoning, but maintained a similar stance used by the Wisconsin federal court that changing election rules right before an election would violate court precedent.

A federal appeals court in Florida also blocked a lower-court ruling that would have restored voting rights to as many as 1.4 million residents with felony records. On Thursday, the Supreme Court declined to intervene in the voting dispute. With the registration deadline to vote in Florida’s primary on Monday, ex-felons will likely be barred from voting in the upcoming election if they owe court fines or fees.

“This Court’s order prevents thousands of otherwise eligible voters from participating in Florida’s primary election simply because they are poor,” Justice Sonia Sotomayor wrote in the dissent. “This Court’s inaction continues a trend of condoning disfranchisement.”

The U.S. Court of Appeals for the 11th Circuit, which has flipped from majority Democratic to majority Republican under Trump, scheduled a hearing on the issue for Aug. 18 – the same day as Florida’s primary election, effectively placing potential voters in limbo.

“Because a court has simply pressed pause ⁠— hasn’t said yes or no ⁠— that is unquestionably inhibiting people from registering to vote because they don’t know whether it’s legal or not,” Levitt said. “That’s not justice, that’s not law … And it is disproportionately falling on, as so many of these restrictions do, Black and brown citizens, racial minorities, people who are poor ⁠— a whole bunch of things that we’re supposed to believe don’t matter in the electorate system.”

Historically, voting rights litigation increases in presidential election years – but the pandemic has exacerbated the number of lawsuits filed in recent months. Richard L. Hasen, a legal scholar at the University of California-Irvine, found that the number of election-related cases has nearly tripled since 1996, co-writing in his casebook supplement “Election Law” that the 2020 election season will likely be the most litigated in history.

Currently, 34 states and the District of Columbia allow excuse-free absentee voting, while other states have loosened mail-balloting rules for primaries. It’s likely that November’s election will be conducted by mail in most states if the pandemic persists, but other states like Texas continue to have tight restrictions. The Supreme Court announced last month that it would not step into the mail balloting dispute, leaving the matter up to individual states.

Trump has claimed, without evidence, that the use of mail ballots will lead to widespread fraud.

“My biggest risk is that we don’t win lawsuits,” Trump told Politico in June. “We have many lawsuits going all over. And if we don’t win those lawsuits . . . I think it puts the election at risk.”

“How many times have you had a birthday card or a Christmas card that didn’t make it to somebody?” Trump campaign senior counsel Justin Clark said on 60 Minutes. “Add on top of that trying to layer this in four months before an election, and you have a recipe for disaster.”

Immediately after the lawsuit was filed, Democrats accused Republicans of attempting to suppress votes, particularly those who would vote for Democratic candidates. In fact, 70% of the 1.5 million requests for mail-in ballots in the May Pennsylvania primary election were from Democrats.

“Donald Trump and Washington Republicans are trying to suppress the voices of Pennsylvanians because they know the easier it is for everyday people to vote, the more likely it is that they will lose,” said Sinceré Harris, executive director of the Pennsylvania Democratic Party.

Trump’s lawsuit, backed by many Republican lawmakers, represents yet another legal challenge to the electoral system, as Democrats and Republicans attempt to change the rules before November. However, some Republican officials and strategists have warned that their own party could be at a disadvantage if the partisan gap over mail voting continues, fearing that Democrats will use mail voting to increase voter turnout.

“Trump’s demonizing of mail ballots is actually hurting the GOP, and the party leaders know it,” Sabato said. “Now they can’t get their party rank-and-file to use the mail for absentees since Trump has convinced them it is a corrupt process. Big mistake. Big, big mistake.”