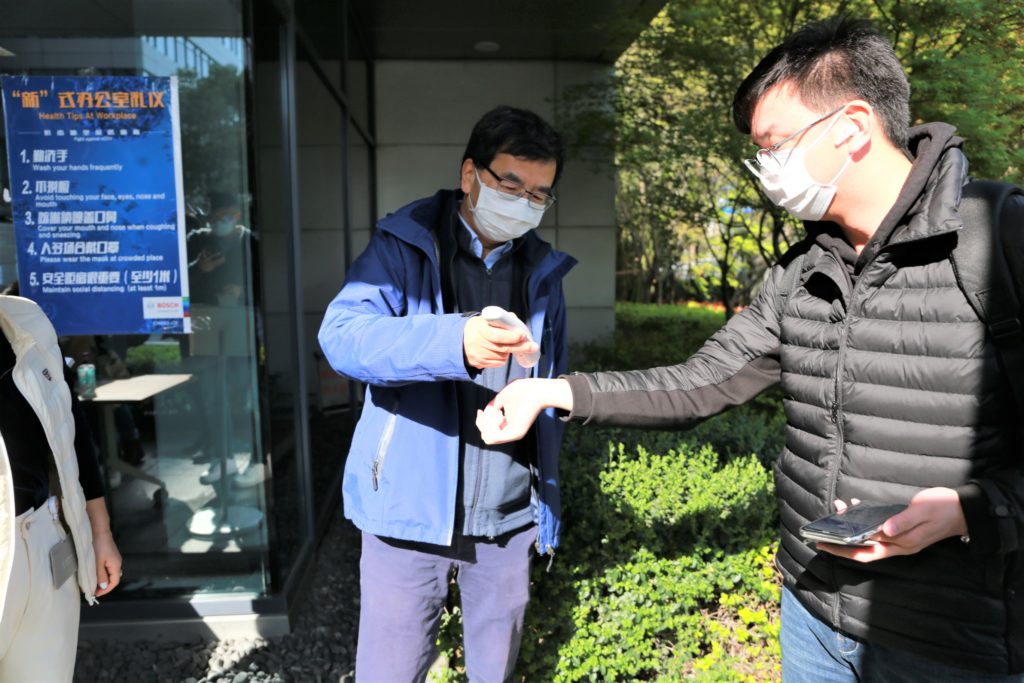 An employee's temperature is measured at the entrance of the Bosch China building in Shanghai. (Photo by Bosch China)

Editor’s Note: This piece is the first in a series on how Chinese businesses large and small have responded to the coronavirus pandemic, and what the world can learn from them. The project is a collaboration between The GroundTruth Project, the Committee of 100 — a non-partisan leadership organization of prominent Chinese Americans — and leading management adviser Douglas K. Smith, also the co-founder of Table Stakes and the Media Transformation Challenge at Poynter.

The outbreak of COVID-19 in China disrupted the life and business routine of one of the biggest manufacturing centers in the world and a key link in the global supply chain. Companies had to scramble to deal with the restrictions on movement and large gatherings and prepare to guard the health of their employees.

We spoke with Dr. Chen Yudong, the president of Bosch China Investment Ltd, to understand how the subsidiary of the German engineering giant dealt with the challenges the outbreak presented to their business and what lessons could be extracted from their experience, as other companies around the world prepare to reduce or stop their operations.

At the end of 2019, Bosch China had almost 60,000 employees distributed across 39 manufacturing sites in 37 cities in the country, generating 14 billion euro ($14.9 million) in revenue, close to 19% of the global revenues of Bosch.

With two plants and two sales offices in Hubei province (where Wuhan is located), the company found itself in the middle of the crisis early on. As the outbreak evolved, so did Bosch’s response. Chen divides the company’s efforts in three phases. The first one started at the onset of the breakout, when official information was scarce. Here’s a timeline of their response:

At the beginning of January, the company started advising their employees traveling to Wuhan to proceed with caution and wear a facemask.

When the government confirmed that the virus spread through personal contact, Chen activated Bosch’s local crisis management team and started drawing plans for dealing with infection. But just a couple of days later, they realized that the scope of the problem was bigger than anticipated. That’s when the company’s headquarters in Germany became involved to coordinate a global effort: “[We knew] China would impact the rest of the global supply chain, so we had a team working on the logistics, how to make sure we had enough parts, working on our product channels,” said Chen.

After the government put Wuhan on lockdown and enacted travel restrictions, the company moved into the second phase of their plans. Bosch’s management team met again to assess the situation and develop new measures, taking advantage of the break provided by the Chinese New Year holiday. First, they put a hold on all the travel between China and Europe and cancelled all scheduled meetings and events. Within an hour, no one in the company had permission to travel without the approval of the board, says Chen. Their next step was to start planning for how they would ensure the safety of their employees when they returned to work.

The company had already bought medical masks for their employees and developed clear guidelines on how to use it; they also implemented a temporary temperature check and a protocol to follow in case of a confirmed case within their premises, said Chen.

The government announced it would extend the Chinese New Year Holiday until February 2nd to limit the amount of mass gatherings. According to Chen, Bosch had already decided to give their employees another full week before returning to work. During that period, the IT department of Bosh increased the capacity of their VPN networks to handle the expected surge in traffic from remote work and developed an app within the Chinese social media platform WeChat that allowed employees to report their whereabouts, if they had been at a high risk gathering, and their temperature at the moment.

The company’s plants restarted operations at 5% capacity, with only 20% of the workforce, said Chen. Because traditionally people travel to their hometowns during the Chinese New Year, and thus were at higher risk of contagion, the company allowed back only those who didn’t travel, after screening them. Office staff started to work remotely.

“We only selected people who stayed on the working location more than 14 days, we allowed them to come back to work. At the same time we do not let them take public transportation. We tried to use our shuttle bus and shuttle them back and forth from the dorm to the company,” said Chen.

The third phase of the plan was a slow ramp up of the operations: After monitoring their progress, Chen decided to allow another 10% of the employees back into the plants. “The second week [increased] to 30% and so on. Now we are up to 70% back in the office,.” said Chen.

They also implemented a 14-day quarantine program that ensured that those who didn’t return to the plants remained at home and those who did would self-quarantine as soon as they returned to their homes.

Bosch also set up stations at the entrance of every factory to take the temperature of employees upon their arrival. Anyone with a temperature above 99 degrees was denied entry and directed to the hospital to be tested.

As of mid-March, their efforts seem to have paid off. Chen reports that only three employees contracted the coronavirus, all of them during the holiday break, which didn’t cause any disruptions. Colleagues who started to return last week from Europe, after the government relaxed the travel restrictions, were placed in quarantine.

Strategic Lessons for businesses during quarantine

Chen says the company’s biggest challenge has been a lack of demand. Because of the pandemic, the current order levels are down 50% of what was predicted.

But metrics have not been a concern for the company, says Chen. Business performance has taken a back seat to the health and safety of employees, he added:

“For just two or three months, we’ll forget about numbers. We can produce what the customer needs,” Chen says. “And then after recovery, [you can] calculate the growth rate, you [can] calculate the KPIs. Right now, if [you can] survive this, that’s good enough – that’s it.”

Communicate clearly, quickly and openly with your employees

Failing to inform your employees quickly about new developments that could affect them can lead to panic and misinformation. Chen recounts how an employee that returned from Germany and went to the office in Shanghai was asked by the government to enter quarantine, because he was in a flight with someone who tested positive for the virus.

As rumors started to circulate, Chen says that they moved fast to inform employees exactly where this person was at the office, which rooms he visited, and what was his current state (he didn’t have the virus.) They also told employees they were conducting a deep cleaning of the facilities. “If people see that we have open communication, they feel much safer.”

Stay in touch with your suppliers and help them if possible

In a crisis of this magnitude, everybody is hurting, and its important to think of the challenges your partners face, not only because you want to have them up and running around the same time as you, but also because a bit of goodwill at a time like this can reap benefits down the road.

Bosch monitored their suppliers throughout the crisis and as plans for restarting production started to take shape, some suppliers asked Chen to intercede on their behalf with the local governments to allow them to reopen their factories. Chen wrote several letters explaining the importance of allowing these companies to get back to work, attending the concerns of the authorities about the safety of employees. His pleas were listened to and production was allowed to restart without further disruptions to the supply chain.

Make sure international colleagues have all the same information

Among his Chinese colleagues, information about the virus was passed more easily, because they could watch, read and listen to official updates about the virus in Chinese. For “expat” colleagues, however, Chen says the language barrier caused uncertainty. To help better inform these members of the staff, the company held regular teleconferences for expat employees.

“We’re also at that time preparing for the expat and their family to leave China, if they choose to. We did not promote it. We said, ‘if you want to leave China at that time, because outside is much safer, and you choose, we sponsor your ticket, you can go out, go back to your country, do whatever you want to do.’”

If employees have to go to the office, find accommodations

In the case of a factory, however, the business is tied to production and Bosch had to find a way to keep the business running.

Chen says some employees have taken to eating lunch together over video chat. “We even have a club of drinking,” Chen says. “This means everybody drinks at home and enjoy[s] your alcohol together.”