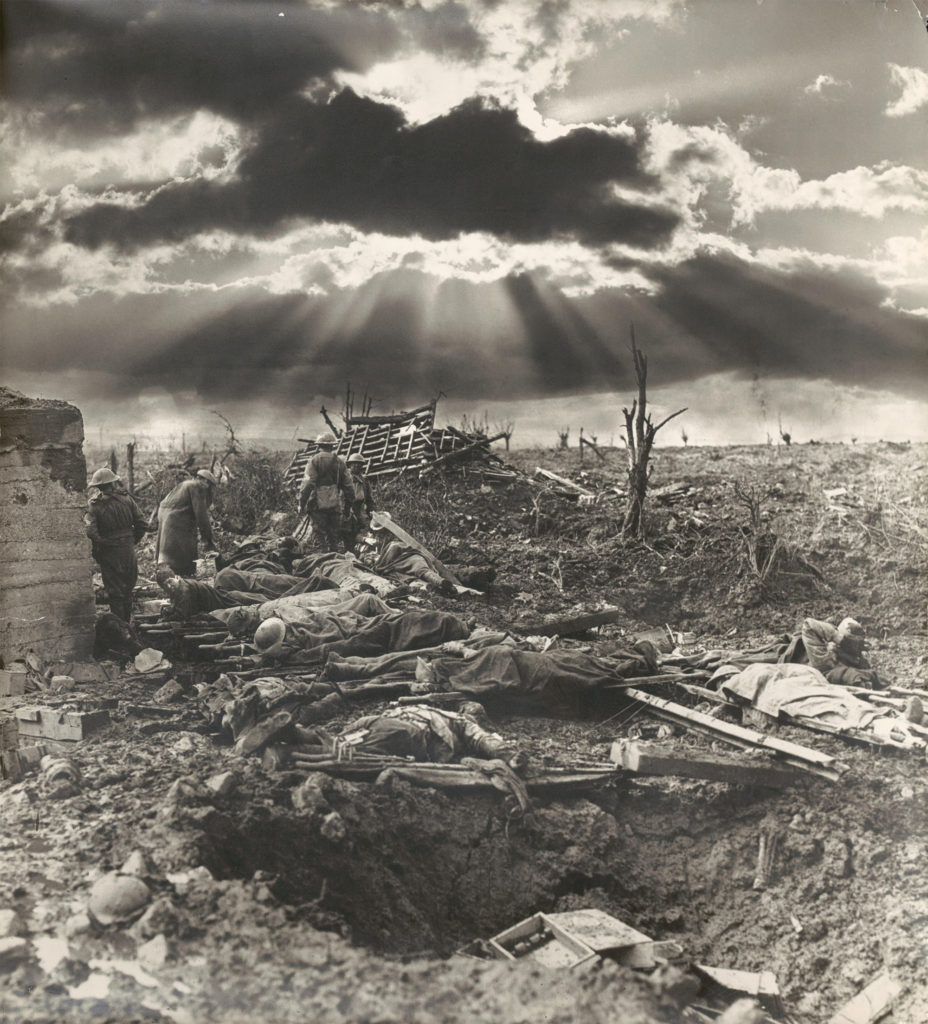 Australian Infantry wounded around a blockhouse near the site of Zonnebeke Railway Station,12 October 1917, the morning after the first battle of Paschendaele. (Photo by Wikipedia/Public Domain)

The armistice of World War One was signed November 11, 1918 at 5 A.M. GMT in what today is called The Glade of the Armistice in a wooded area outside of the French provincial town of Compiègne about 35 miles northeast of Paris. French officials accepted the surrender of Germany in a signing ceremony at a railstop and six hours after that at 11 A.M., the actual ceasefire was to take effect. Meanwhile, the fighting raged for its final hours with more troops dying on the last day of World War One than died on D-Day in the Second World War.

Finally,  at the 11th hour, the guns of the Western Front fell silent and brought to a close four years of a savage conflict of trenches, poison gas, indiscriminate bombing and rampant disease and starvation that would take the lives of 20 million soldiers and civilians and 21 million more who were wounded.

In the aftermath of the death and destruction, it was called the war to end all wars. And this Sunday church bells will toll and military bands will play taps across graveyards from the United States to Flanders Fields in Belgium where, as the John McCrae poem memorably states, “the poppies blow between the crosses row on row.” In America, the day is known as Veterans’ Day and across Europe it is known as Remembrance Day and the red poppy is worn as an enduring symbol of the human toll of war. And there are World War One cemeteries scattered around the world in Jerusalem and Iraq and Gallipoli and Paris where world leaders are gathering this weekend for remembrance ceremonies.

By January 1919, the world’s leaders were gathering in Paris at Versailles to write a set of peace agreements. The victors of World War One, the French, the British and the Americans, would over the course of six months divide up the world, literally drawing new national boundaries, birthing new countries, including Iraq, and codifying new international organizations. The tension between the self-interests of the great imperial powers’ division of the world and U.S. President Woodrow Wilson’s lofty rhetoric of self-determination of nations still defines geopolitics today.

That gathering in Paris, it has been said, was the peace to end all peace.

And as many historians see it, the Treaty of Versailles of 1919 was punitive and flawed and as a result paved the path directly to the vengeful rise of Germany under Hitler, a lowly corporal in World War One, and the horrors of World War Two. Hitler embodied that spirit of revenge and after the Nazi invasion of France, he forced the French to surrender to Germany in the exact same box car at the exact same rail stop in Compiegne, France where the armistice we remember today was penned. The cliche that history repeats itself shouldn’t make us numb to the fact that we live in a world where many historians see parallels between World War One and the uncertainty of geopolitics today.

Historian Christopher Clark, a Cambridge University professor who wrote “The Sleepwalkers: How Europe Went to War in 1914,” powerfully illustrates why we need to understand the events that led to World War One in order to understand the peril of the moment we live in today. He sees important parallels between today and 100 years ago when the rising and falling of modern empires and the struggles and power vacuums they created paved a path to the first global conflict. The conditions were a tinderbox which was then triggered on June 28, 1914 by the assassination of Archduke Franz Ferdinand, heir to the Austrian throne, by a 19-year-old Serbian nationalist. Today, Clark writes, “a system of global bipolar stability has made way for a more complex and unpredictable array of forces, including decline empires and risking powers — a state of affairs that invites comparisons to 1914.”

I reached Clark by phone  this week to talk with him about these broad parallels, and he explained that the powers of Europe in the years before the start of World War One were seeing an erosion of the trust between them and “sleepwalking,” as it were, into a war the likes of which the world had never seen.

Clark said, “So it was a world in which the distrust seeped into the relationships between friends and that created as much risk, as much uncertainty, as the hostility between alliance blocks.

It’s a reminder, I suppose, to fear war much more than we do. We don’t fear war enough, and we don’t love peace enough. We so easily get bored with peace. And I think that’s a terrible, terrible mistake..

He added, “That’s an important point now I think because of course, we’re looking at very difficult days in particular for the most important alliance in the world, NATO, which has played a key role in keeping the peace in the last- well, since the Second World War… So there’s a sort of general decline in cohesion, not just an increase in hostility but also a decline in cohesion and predictability, which is I think worrying in which not only itself constitutes a risk but encourages those who make decisions, which might touch on war and peace, more inclined to take risks because it makes them more nervous.”

This same kind of climate of miscalculation of motives and erosion of trust is defining today’s global geopolitics, according to Clark, and to those willing to listen he implores us to known this history and to understand that the world leaders in 1914 were indeed “sleepwalking” into war, half conscious of the risk of battle and half unaware of the horror of a global conflict.

When they woke up, Clark said, “It was all so much worse, than the worst that people had been afraid of. So, in other words, it’s a reminder I suppose to fear war much more than we do. We don’t fear war enough, and we don’t love peace enough. We so easily get bored with peace. And I think that’s a terrible, terrible mistake. And we should remember that war is not a way of clarifying issues, it does exactly the opposite. And It’s costs always far outweigh the benefits.”

That valuable lesson of history will echo across the graveyards where commemorations of the war are held Sunday with somber church bells, the buglers playing taps and the sharp crack of gunfire in salute of the fallen.