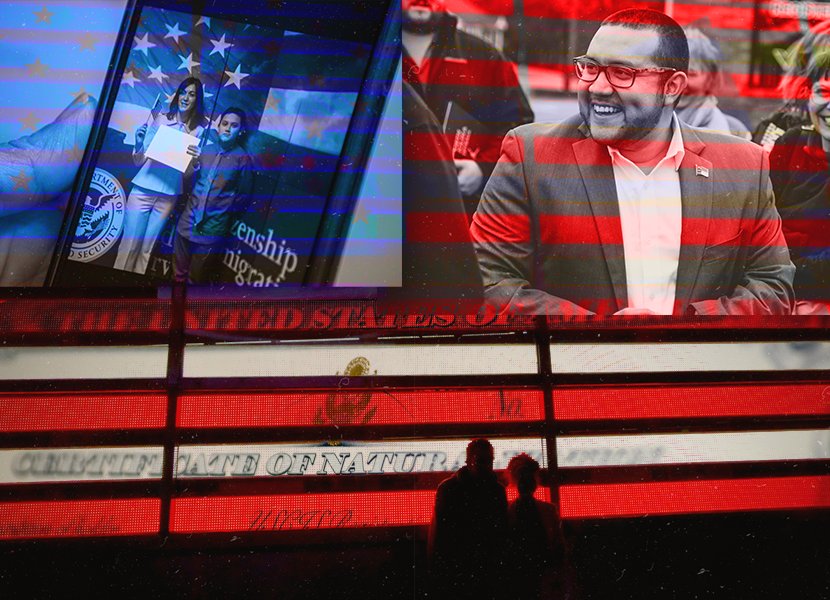 CHARLOTTE, N.C. — Alba Sánchez will be doing something this fall she’s never done during her nearly two decades in America: vote in a U.S. presidential election. As a newly naturalized U.S. citizen from Costa Rica, she’s registered to vote and has already requested an absentee ballot this year in case COVID-19 makes it too risky to vote in person in November.

“Why am I voting? For justice, for equity, for better opportunities, access to health and education and representation for my community,” said the 44-year-old Sánchez, who lives in Charlotte.

The number of registered Hispanic voters across North Carolina is growing fast.This election year, nearly 219,000 have registered, a 25 percent increase since 2016 when 164,000 signed up to vote. Those numbers are expected to rise as more Hispanics become U.S. citizens or turn 18 years of age. The state is home to nearly 1 million Hispanics, with about 338,000 — about one in three — currently eligible to vote, according to the Pew Research Center, which tracks Hispanic voting data nationwide.

Hispanic voters comprise only about 3 percent of the state’s 7 million registered voters, but they are attracting more attention than ever because North Carolina is a swing state. In the last three presidential elections, the winner has claimed victory in the state with less than a 175,000-vote margin.

Yet, the challenge looming ahead for this burgeoning community — not only this election year, but in the future — is whether they can build up their political muscle by registering more voters, go to the polls in higher numbers and nurture more Hispanics to run for public office.

The Hispanic population’s lack of representation in this southern state is evident in the numbers. Over the past two decades, the number of Latino elected officials at any level went from just one to four — even as the state’s Hispanic population grew 111 percent between 2000 and 2010. Currently, none of the 170 House and Senate members in the state’s General Assembly are Hispanic. Nor are any of its 13 members of Congress.

“The media looks at these numbers, looks at the growth, knows that it’s sort of a new population in the South, and then it’s like, “Hey, how come you guys aren’t making a difference?” And that’s really unfair to put on an entire community,” he said. “The community is going to grow and have impact in its own natural time.”

Hoping to boost Hispanic political power in North Carolina is Ricky Hurtado, 31, the son of Salvadoran immigrants who escaped the Central American country’s civil war in the 1980s. He’s campaigning for a House seat in the state General Assembly, which has no Hispanics.

He’s facing incumbent Republican Stephen M. Ross, who has represented the district since 2013, when he flipped the seat long held by Democrats. The 69-year-old lawmaker is seeking his fourth term. Two years ago, Ross beat his Democratic opponent by less than 300 votes.

“I can find 300 Latinos in the community,” said Hurtado.

His challenge is the same one faced by get-out-the-vote groups across the state: registering more Hispanics and getting them to the polls. Hurtado said the district is home to 21,000 Latinos, but only 3,600 are registered voters.

He believes the murder of George Floyd, a Black man, by a white police officer in Minnesota may encourage younger voters demanding racial justice to register and vote.

Like Hispanic voters nationwide, Hispanics in North Carolina skew younger than non-Latino voters. Those 18-24 years of age comprise 29 percent of all registered Hispanic voters in the state compared to just 11 percent of non-Hispanics in the same age group, reports the Educational Fund of the National Association of Latino Elected and Appointed Officials (NALEO).

“The Tar Heel State has a young Latino population, and over the next few election cycles, we expect the makeup of North Carolina’s voters will increasingly reflect the state’s growing diversity,” Arturo Vargas, Chief Executive Officer of NALEO, said in a statement earlier this year.

UNC’s Cuadros said candidates like Hurtado will pave the way for other Hispanics to run for public office. “Once people see that somebody can do this, other people will get involved,” he said, noting that Italians, the Irish and other immigrant groups followed a similar path in the past.

North Carolina’s Hispanic community is relatively new. The first wave of mass migration happened only three decades ago when Hispanics from mostly other parts of the United States, like California, Texas and Chicago, were recruited to work at food processing plants, like Tyson and Mountaire Farms. The state also has among the nation’s highest number of agricultural guest workers, who are mostly from Mexico.

North Carolina’s population mirrors the nation’s Hispanic population, with about six in 10 identifying Mexican as their primary ancestry, followed by Puerto Ricans at 11 percent and 14 percent from Guatemala, Honduras and El Salvador.

The National Partnership for New Americans reported that more than 7,400 Mexicans, between 2014 and 2018 became U.S. citizens, the highest of any foreign-born group in North Carolina.

Getting Hispanics to register to vote and, more importantly, cast a ballot means connecting with them year-round and not just during election season, said Alissa Ellis, Advocacy Director at Democracy NC, a non-partisan voting rights group.

“People are not thinking about voting when they’re thinking about how they’re going to feed their family,” said Ellis, who credits Latino community organizations like El Pueblo in the Raleigh-Durham area and the Latin American Coalition in Charlotte for helping Hispanics beyond voter registration.

Political groups and campaigns, said Ellis, will typically focus on immigration as top issues when affordable healthcare and good-paying jobs are higher priorities for most Hispanics.

“Folks who maybe don’t look at the [polls] and aren’t in [the] community and having these conversations think, ‘Oh, well, I can slap a pro immigrant message on something and that’s just going to satisfy voters,’ but it’s just not factually true,” she said.

For Sánchez, the first-time Hispanic voter from Charlotte, voting in November will give her the chance to represent what she describes as “an underserved community.”

“My vote is a responsibility, a privilege that I need to and must use,” she said.

Laura Brache covers immigration and the Latino community in Charlotte for WFAE and La Noticia. This dispatch is part of a series called “On the Ground” with Report for America, an initiative of The GroundTruth Project. Follow her on Twitter: @laura_brache