ON THE GROUND IN GREENVILLE, MISS 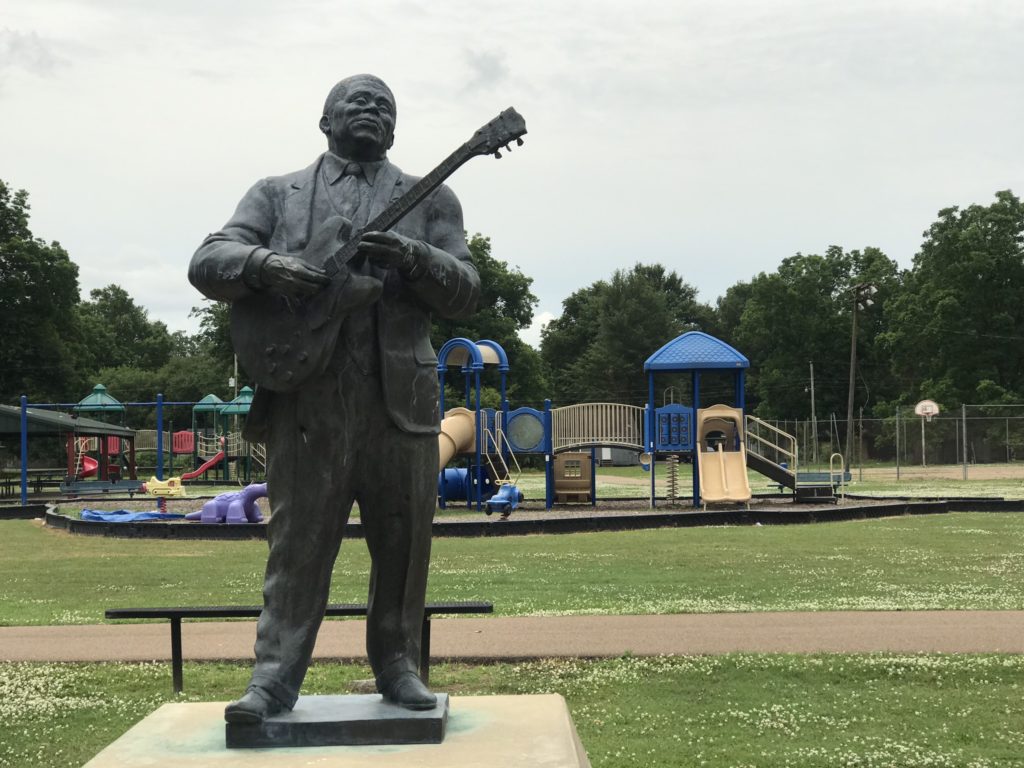 A statue of legendary blues musician B.B. King in Indianola, Mississippi, in the heart of the Mississippi Delta. (Photo by Alexandra Watts/GroundTruth)

GREENVILLE, Miss. — I recently moved here to the heart and soul of the Mississippi Delta, the birthplace of the blues. Signs of this rich music heritage are all around me in this part of the state – the town where B.B. King was born, the railroad station where “Father of the Blues” W.C. Handy first heard the blues, and, perhaps most famously, “The Crossroads.”

This is not just any intersection. Legend has it that blues musician Robert Johnson came to this place where Highway 61 and Highway 49 meet in nearby Clarksdale and sold his soul to the devil in order to play guitar — and that it inspired his famous song, “Cross Road Blues.”

“I went to the crossroad / fell down on my knees

Asked the Lord above / ‘Have mercy, now, save poor Bob if you please.’”

The deal with the devil is a legend, but it’s fact that without Robert Johnson, you would likely have no Led Zeppelin, Rolling Stones, Bob Dylan or any other musician who can trace their musical roots back to the blues.

I get excited when I talk about the blues. Even if you aren’t a major fan, though, there’s something amazing about one genre emerging out of Mississippi changing music forever.

Some aren’t as easily convinced — including a group of preteens who like to ask me if I’m sure it influenced everything.

It’s the middle of the week and, yet again, I am facing their skepticism.

I’m volunteering in a summer and after-school program for kids called Greenville Renaissance Scholars. As part of the program, I’m helping a handful of them make a documentary film and play about the impacts and influences of blues and civil rights in Greenville. Three-quarters of the kids are considered “at risk”; in Washington County, where the program takes place, 45 percent of children live in poverty – much higher than the Mississippi average. They are also typical students on the brink of middle school — they like TikTok, video games and memes, and like most their age, they do not listen to the blues.

The Greenville Renaissance Scholars’ leader, Jon Delperdang, is also there to help the students, but in both the documentary and the play, the students’ creativity leads the way. The projects are all about “making it hands-on,” he says.

When you live in the Mississippi Delta, it’s easy to be hands-on with the blues. It doesn’t matter if you are passing by the Crossroads or walking around Greenville and coming across historic markers from the Mississippi Blues Trail.

But even though the blues genre is influential, it has never gotten its full due. Blues musicians did not live or die like rock stars. Most of their influence was recognized years if not decades later, with musicians like The Rolling Stones taking their name from a Muddy Waters song and Eric Clapton taking inspiration from Robert Johnson. They cited the sounds of the Delta as the foundation for their music. But Robert Johnson passed away before Clapton was born and without a fraction of the awards, acclaim or wealth of the musicians who came after him.

And even back in the 1950s, when some of the popular blues legends were recording, most people are (and remain) more familiar with Elvis Presley’s ‘Hound Dog’ than the original by Big Mama Thornton. With the Renaissance Scholars, I try to counter that under-appreciation by showing the genre’s ties to many of their favorite musicians.

Some of my students seem to think that when I claim the blues can be heard today, I mean every song has the “blues sound” — lyrics that expose pain like  “When you hear me singin’ this old lonesome song/People, you know these hard times can last us so long” from Skip James’ “Hard Time Killing Floor Blues.” Or the call-and-response patterns and the raw sound associated with the genre. Not all blues influences are created equal, and it’s easier to hear in some more than others.

To know the blues, though, you have to know the history of the Mississippi Delta. For example, in the song “When the Levee Breaks,” the lyrics tell the story of the 1927 floods in Greenville. The floods left homes and people underwater, and black residents were forced to work and die in dangerous conditions.

“If it keeps on rainin’ levee’s goin’ to break /

And the water gonna come in, we’ll have no place to stay.”

And in “Parchman Farm” by Bukka White, it’s easy to feel the pain of prisoners who suffered from Jim Crow racism and the infamous chain gangs.

The blues allows for expression and documentation, which are what the students are doing.

In their play, the students have touched on everything from cultural appropriation to the impacts of slavery. The topics are very real. The projects are a way for students to feel a connection to where they live. Young people are leaving the Delta in large numbers for opportunities elsewhere, but this program gives students a chance to see the beauty and culture of their hometown.

“We want them to have a strong reason to stay,” Delperdang says. “We try and get students to try and see the positive aspects of their community while also challenging the community to provide more opportunities for students.”

When I started volunteering with the program, I thought I would have a bunch of students who could quote the blues by the end of the school year. And, yes, they’ve learned a fair amount.

But it’s the tradition of expression and honesty that makes blues special. Seeing a group of young, black students talk honestly and openly about their everyday lives shows they are getting something from blues music — something that cannot be taught.

Maybe one day, they will embrace blues music a little bit more. But the realness and the storytelling found in Delta art can be found in different places — from music of the 20th century to a modern-day film and play done by middle schoolers.

Alexandra Watts is a Report for America corps member, covering the Mississippi Delta for Mississippi Public Broadcasting. This essay is part of series called “On the Ground,” supported by The GroundTruth Project.