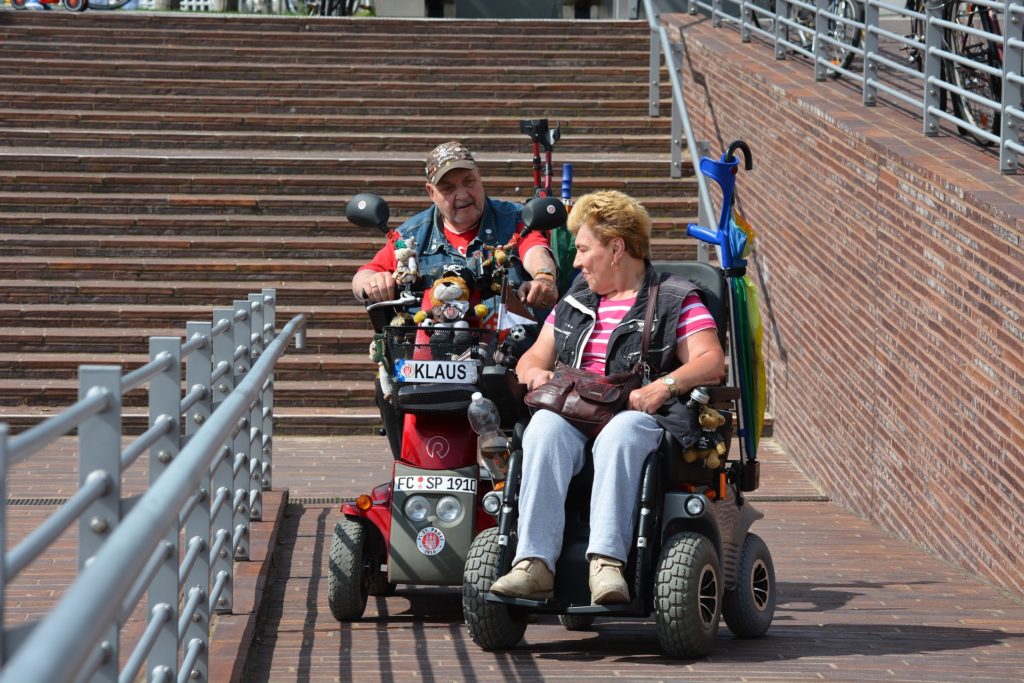 Accessibility is an important issue for people with disabilities. But as Nicole Koester with the National Center for Disabilities and Journalism points out, accessibility (Photo by Pixabay)

Despite accounting for 15 percent of the world’s population, people with disabilities have been under-represented in the media.

“Persons with disabilities are seldom covered in the media,” reports the United Nations Department of Economic and Social Affairs, the arm of the intergovernmental organization responsible for promoting the rights and advancement of people with disabilities. “When they are featured, they are often negatively stereotyped and not appropriately represented.”

But the media has the potential to be a catalyst for change, and better inform the public discourse on issues like access and healthcare – issues that affect not just those with disabilities, according to Nicole Koester, program manager of the National Center on Disability and Journalism at Arizona State University.

“When we have stories about disability, it doesn’t just benefit that population,” says Koester.  Stories about accessible parking at a local store, for example, could also help a pregnant mother, or someone who has a temporary disability, like a broken foot, she adds.

Still, Koester finds that some journalists are hesitant, if not fearful, of covering disability issues. They don’t want to mischaracterize people with disabilities and so, rather than being “lambasted” by a person or organization sensitive to the subject, “they’re just not going to do it.”

But that shouldn’t deter you.

For this Navigator column we asked writer Imani Barbarin, photojournalist Chris Juhn and journalist and historian David M. Perry, who all work on disability issues, to share what journalists should consider when reporting on people with disabilities.

Frame things around the issues affecting people with disabilities, not the disability

Imani Barbarin is a writer whose commentary on disability rights and identity can be found in Forbes, Rewire.News and Bustle. She discusses her life as an African-American woman with  Cerebral Palsy on her blog Crutches and Spice.

Reporting on people with disabilities is getting a little bit better. More and more people are seeing disabled people as autonomous and navigators of their own minds. But quite often we do see stories of disabled people being acted upon or disabled people being shuffled around and used for charity narratives and things like that, when, in reality, we’re change makers, politicians, actors, actresses, performers.

But everything tends to be centered around what people can derive from our story and we don’t really focus on why it’s so hard to live with the disability. This frustrates me the most because it says that, because you’re successful, you overcame your disability. That’s not true. A lot of people are successful and have a disability. We need to stop reaching to other people’s identities for our own comfort.

And usually it’s from the perspective of, ‘I don’t want to practice faith anymore, simply because my church is inaccessible, my synagogue isn’t accessible,’ or ‘People use me as a token for their faith.’

So we are part of every single community and when we frame things around just the disability, we miss the entire picture.

Be the megaphone, not the voice

Chris Juhn is a freelance photojournalist and former Maynard 200 fellow. His work has appeared in The Star Tribune, The Minneapolis Spokesman-Recorder and Minnesota Public Radio’s website. Juhn is developing a news website for people with disabilities by people with disabilities. He was diagnosed with autism when he was 10 years old.

With my own autism, I know what I’ve been through. As you grow up in special ed, and as you grow up around people with multiple different disabilities, you can see their struggles and issues.

But it’s not like there’s a lot of people with disabilities who are journalists. And so if you say, ‘Oh, I’m just going to leave the reporting to the people with disabilities,’ there’s not enough of us out there to really cover all the issues. I think if you do cover us, you got to understand our perspective and not just go on what you think.”

No matter how many times I cover a police shooting, for example, I’m not going to completely understand the experience of what it’s like every day being black. That’s why I need to listen to my sources and hear what they have to say, keeping that in mind.

I don’t think that not being black should shut me out from covering stories involving black people. I need to understand that I’m not their voice, I’m just the megaphone and it’s their voice that I’m amplifying.

David M. Perry is a journalist and historian. He has reported on access for people with disabilities for magazines including Pacific Standard and the Atlantic. He has also written about his experience as a father of a child with Down Syndrome. Perry has dyslexia.

Who are you centering? Are you saying, “It’s so great that the quarterback humbled himself to date this girl with a real problem?” Or is it, “Girl with Down Syndrome has agency, wants to have a boyfriend, wants to go dancing, wants to have sex?” That is an activist story, whether you want it to be or not.

NCDJ offers myriad resources to enhance your understanding and fill your “rolodex” with experts who can offer insights on disability-related issues. There is also a helpful bilingual Disability Language Style Guide.

“Don’t be afraid to select stories about those with disabilities,” Koester says. “Give it your best effort. Try to be as journalistic in your ethics and your approach as possible and learn from your mistakes, if it doesn’t turn out quite the way that you think it might. We get better with practice.”