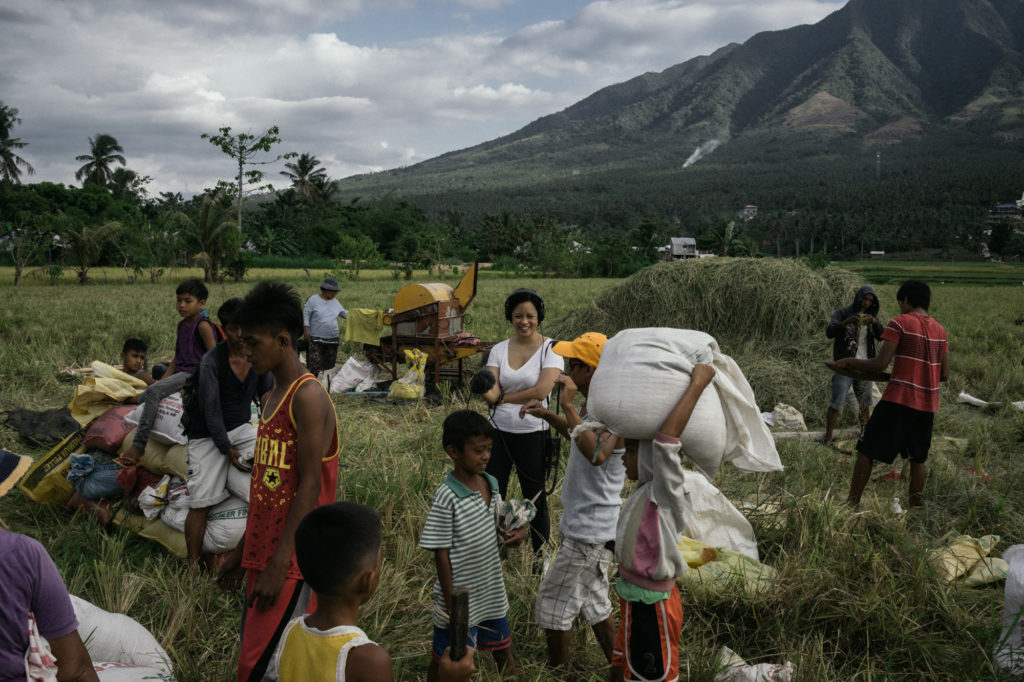 GroundTruth Fellow Aurora Almendral reported on the links between climate change and human trafficking in the Philippines. (Photo by Hannah Reyes Morales/GroundTruth)

The GroundTruth Project is pleased to announce that it has been accepted into the Draper Richards Kaplan Foundation’s prestigious portfolio of organizations searching for solutions to some of the world’s biggest problems.

Draper Richards Kaplan Foundation (DRK), a venture philanthropy firm based in Menlo Park, will support GroundTruth founder and CEO Charles M. Sennott as he realizes his vision to train a new generation of journalists to help transform the media landscape in America and to focus in on social justice stories around the world.

The DRK investment model is designed specifically to catalyze growth for early-stage, non-profit organizations. After a thorough due diligence process, DRK provides a blend of capital, technical support, and a network of entrepreneurs to all organizations in their portfolio.

With financial and technical support from DRK, GroundTruth will redouble its efforts to carry out frontline journalism about stories that matter, and to significantly increase the number and quality of reporting fellowships we offer to a new generation of journalists.

GroundTruth will continue to focus on in-depth, global reporting about climate change, human rights abuses, income inequality and youth unemployment, both here in the United States and around the world.

“At a time of deep political division in America, there seems to be a consensus that the media failed in the last election to do its job to enlighten and inform,” Sennott said. “Now, GroundTruth is more focused than ever on our mission to support a new generation of journalists who we believe will be the key to figuring out the future of journalism at a time when it is under attack from many corners.”

DRK Foundation CEO Jim Bildner, who will now join the board of GroundTruth, said the nonprofit media organization has become a new media pioneer producing high-quality, fact-based journalism that is rigorous and impactful and reaches a wide audience across digital platforms.

“GroundTruth is all about the future of journalism and about supporting a new generation of journalists to report on the frontlines of the biggest challenges the world faces,” said Bildner. “And that kind of on-the-ground reporting is needed now more than ever not only in the under-reported corners of the world, but right here in the under-reported corners of America.”

A longtime foreign correspondent for The Boston Globe who covered the wars in Iraq and Afghanistan as well as the Arab Spring, Sennott co-founded the award-winning international news organization, GlobalPost, in 2008.

As it became clear that the ad-supported business model was unable to support high-quality international journalism, he pivoted to supporting the next-generation of correspondents through a non-profit model, founding The GroundTruth Project in 2013.

This year, GroundTruth garnered a prestigious Alfred I. DuPont award for strength in reporting in the public interest for its video and podcast series on Afghanistan titled “Foreverstan.” This immersive, multimedia project also received a national Edward R. Murrow Award for its series of short-form digital videos.

About the Draper Richards Kaplan Foundation

Started in 2002, Draper Richards Kaplan is a global venture philanthropy firm supporting early stage social enterprises. DRK was one of the first foundations to utilize the venture capital model to provide critical early stage capital to social enterprises around the globe tackling some of society’s most challenging issues. Now on its third fund, the foundation has made more than 96 investments since it was founded. Prior investments include well-known organizations such as Room to Read, Kiva, One Acre Fund and EducationSuperHighway.

Committed to supporting and inspiring a new generation of journalists to tell the most important stories of their generation, The GroundTruth Project is based in Boston at the PBS flagship, WGBH. Since it was formally incorporated as a nonprofit in 2014, GroundTruth has offered more than 100 reporting fellowships and workshops to top, emerging journalists around the world and distributes their award-winning work through editorial partnerships with ABC News, PRI’s The World, PBS NewsHour, PBS FRONTLINE, The Atlantic, The Huffington Post and other leading news organizations. For more GroundTruth fellowship opportunities, click here.