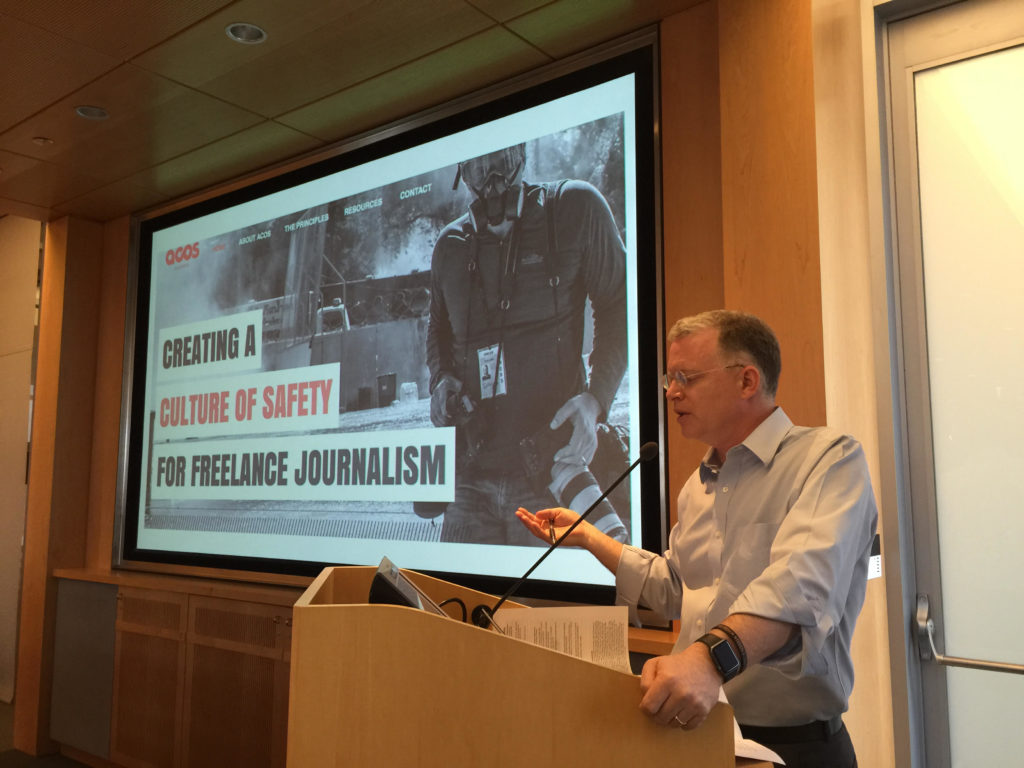 David Rohde, national security investigations editor at Reuters, leads a session at the Foreign Editors Circle meeting hosted by The GroundTruth Project on May 13, 2016. (Charlie Sennott/GroundTruth)

BOSTON — Representatives from more than 20 major news outlets and affiliated organizations gathered at WGBH today for the fourth annual meeting of the Foreign Editors Circle, an alliance of foreign and international editors from across the American media landscape.

The meeting included editors from locally headquartered PRI The World, PBS FRONTLINE, WGBH News and the Boston Globe, as well as international leadership from Buzzfeed, the New York Times, Reuters and Mashable, and advocates like Diane Foley, of the James W. Foley Legacy Foundation, and John Yearwood, board chairman of the International Press Institute, the Vienna-based press freedom organization with a North American chapter that began convening the Foreign Editors Circle in 2013.

The group unanimously agreed that the best way to support freelancers and local journalists in the field was to pool together to make sure reporters have the safety nets they need, such as insurance, conflict training and resources.

Editors were also in agreement about placing a priority on fostering a culture of safety for journalists – particularly freelancers – but that it needs to be done in a spirit of collaboration. There are already more than 100 organizations signed onto a global initiative called A Culture of Safety (ACOS) Alliance, and the list continues to grow.

Barbara Trionfi, executive director of the International Press Institute (IPI) joined the meeting via Skype to give an update on a new online platform, On The Line,  a tool for tracking digital threats against journalists.

Press freedom in countries with authoritarian regimes, including locales where foreign correspondents gather like Istanbul, Beijing and Cairo, is a growing concern for editors, who regularly see reporters get blacklisted or removed from the countries they are working in, if not physically harmed.

Instances of journalists being arrested and abused, or even ejected from countries without cause largely goes under-reported, however, and there was a feeling in the group that this was because of a habit of journalists not covering other journalists.

Reuters’ David Rohde suggested, and others agreed, that to call greater attention to the plight of reporters in conflict areas abroad, news organizations need to turn the spotlight on each other and independent colleagues in the field when something goes wrong.

Throughout the morning, discussion topics ranged from cybersecurity risks, to how to reach digital readers, to how to better collaborate to tell the big stories.

“This annual gathering is vital for those of us who care about international news and who see the need for an ongoing global dialogue about the threat to press freedoms in many parts of the world and to address the need for a new ‘culture of safety’ for journalists, especially freelancers, working at a time of rising peril,” he said.