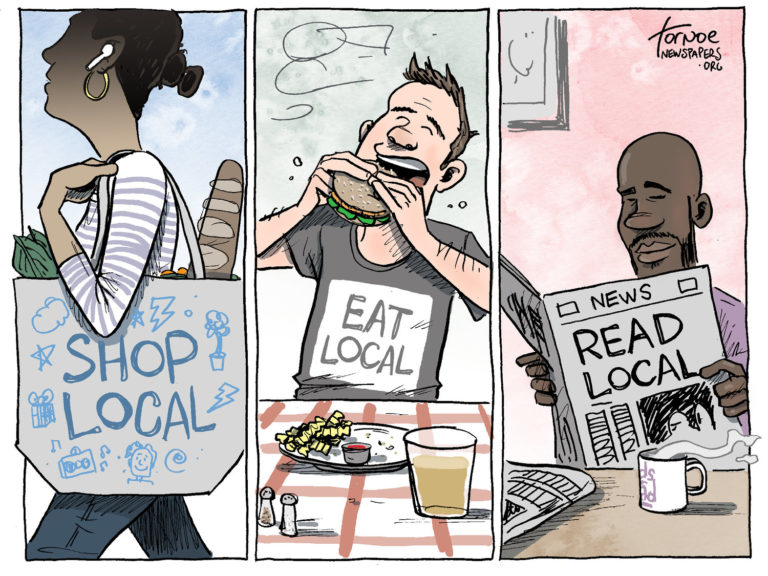 Rebuild Local News, a coalition representing more than 3,000 local newsrooms, funders of local journalism, and civil society organizations advocating for a healthy free press—including The GroundTruth Project and our national service program Report for America—today placed its support behind the newly reintroduced Local Journalism Sustainability Act for the 117th Congress.

Reps. Ann Kirkpatrick (D-AZ) and Dan Newhouse (R-WA) introduced the bipartisan bill that seeks to provide a pathway to financial viability for local newspapers around the country through a series of three tax credits that will encourage Americans to subscribe or donate to local publications, help those publications retain and compensate journalists, and provide small businesses money to advertise with local news organizations.

“Local journalism is a bedrock pillar of communities across the United States,” said Rep. Kirkpatrick. “Unfortunately, journalistic endeavors throughout the country are facing major economic struggles that put the future of many publications in serious jeopardy. These struggles existed before COVID, but the pandemic only made them more severe. We need to make sure these publications can sustain themselves through this crisis and beyond, and I believe the credits in this bill make significant progress in providing a pathway to that sustainability.”

“For many rural communities like ours in Central Washington, local news is the only way to receive important information and updates. Unfortunately, many of our locally-owned newspapers have been struggling to make ends meet,” said Rep. Newhouse. “By providing tax credits for readers and small businesses and by empowering our local journalists, we can begin to help our small newspapers remain resilient and continue to provide in-depth perspectives that inform their readership regarding local current events.”

The first tax credit works to incentivize annual subscriptions to local papers that primarily produce content related to local news and current events and can also be used for nonprofit publications. The second is a five-year credit for local newspapers to employ and adequately compensate journalists. The last of the three credits is a five-year tax credit that incentivizes small businesses to advertise with local newspapers, as well as local radio and television stations. Details about how the bill works can be found here.

“Local news is collapsing, threatening the health of communities and democracy. Reps. Kirkpatrick and Newhouse’s bottom-up approach is terrific — bringing serious help to local news organizations without allowing political favoritism or harm to the First Amendment,” said Steven Waldman, president of Report for America and coordinator of the Rebuild Local News coalition.

The bill has been endorsed by the following members of this coalition:

The legislation is one of the most bipartisan bills focused on helping local media. A similar version introduced last session attracted twenty Republican co-sponsors.

Learn more about the Rebuild Local News coalition and its policy proposals at rebuildlocalnews.org.

Rebuild Local News is a coalition of organizations advocating for locally-grounded and nonprofit community journalism. The 3,000+ newsrooms that we represent include weekly community newspapers, citywide nonprofit websites, ethnic publications, centers for state watchdog journalism, digital-first news sites, rural papers, public radio stations, and family-owned newspapers as well as the leading organizations advancing local journalism innovation. The coalition is housed at The GroundTruth Project, a nonprofit dedicated to restoring journalism from the ground up by supporting the next generation of journalists through field reporting that serves under-covered corners of the United States and the world.

Report for America is a national service program that places talented emerging journalists in local newsrooms to report on under-covered topics and communities. Launched in 2017, Report for America is creating a new, sustainable system that provides Americans with the information they need to improve their communities, hold powerful institutions accountable, and rebuild trust in the media. Report for America is an initiative of The GroundTruth Project, an award-winning nonprofit journalism organization with an established track record of training and supporting teams of emerging journalists around the world, including the recent launch of Report for the World in partnership with local newsrooms in India and Nigeria.