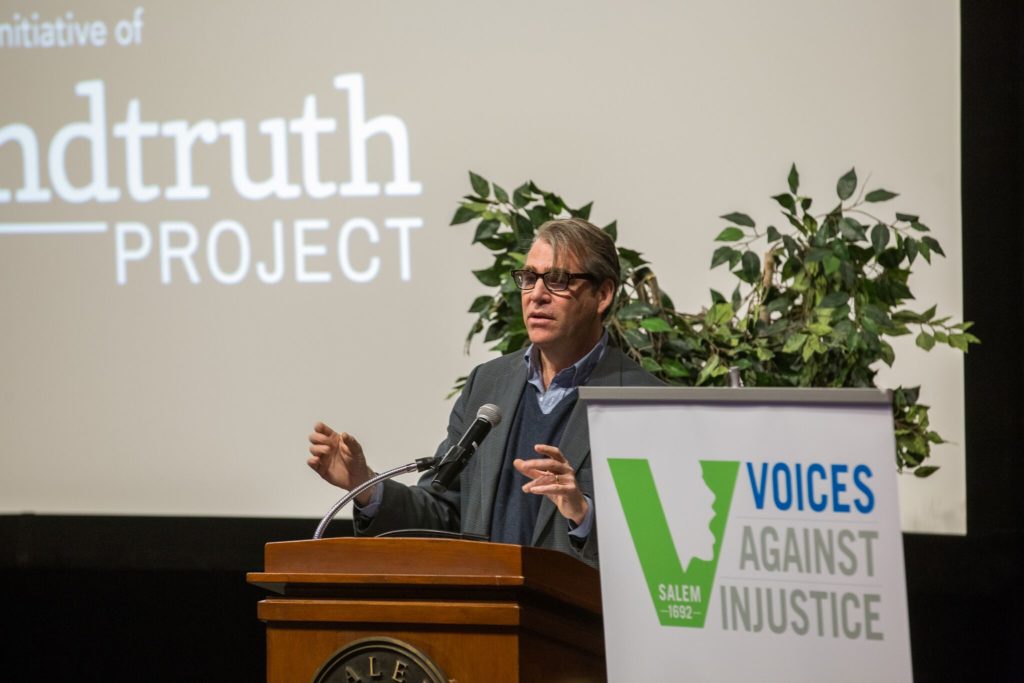 In 1692, in the colonial outpost of Salem, Massachusetts, amidst local tensions and religious fervor, 20 people were convicted in hysterical and unfair trials and executed as witches. The Salem Witch Trials were a foundational flaw in the American system of justice, and a lesson for what happens when a community becomes so conflicted and so fearful that it turns on residents who don’t conform to the majority’s expectations.

It is this history — and its lessons — that motivates a local foundation in Salem, Voices Against Injustice, to recognize the work of people and organizations who “confront fear and social injustice with courage.” They’ve recognized such heroes as Morris Dee, the founder of the Southern Poverty Law Center, and Lenny Zakim, for his work with the Anti-Defamation League.

And on Sunday, Voices Against Injustice recognized The GroundTruth Project with its 2018 Salem Award for Human Rights and Social Justice for the work GroundTruth has done reporting on social justice issues around the globe. The event was hosted at Salem State University, and Salem mayor, Kimberley Driscoll and several members of the Massachusetts state legislature were in attendance. Congressman Seth Moulton, who represents Salem in the sixth district of Massachusetts, sent a videotaped congratulatory message.

In his keynote, Sennott compared our current political moment to that of the Salem Witch Trials.

“When we have people who weaponize doubt, they do it for a reason. They do it to intimidate us. They do it so that we succumb to fear and we turn on each other, and that is as alive today as it was back during the witch trials,” Sennott said.

The gutting of local newsrooms, as the business model for journalism changed, may be part of the reason Americans can’t agree on the same baseline facts, and why distrust in the media seems more prevalent than ever. It is in this environment that GroundTruth is making it a priority to be part of the solution to fear and distrust in communities, by supporting local journalism through its Report for America initiative.

National issues, like the culture war issues of gun control or abortion, may be divisive and lead people to double down on their opinions and not listen to someone with a different point of view. But it’s harder to do that on local issues. Residents can all agree they want clean drinking water when they turn on their taps, no matter their political convictions.

And when journalists live in the communities they cover, and see their readers at the grocery store, it’s harder to call that journalist an “enemy of the people,” as President Trump has referred to the media. In that way, local journalists in their communities serve as ambassadors for the profession, by reporting fairly on local that matter to residents, day in and day out.

The recognition from Voices Against Injustice is humbling, and cannot come at a more opportune time to help GroundTruth continue the work of promoting justice and civil discourse through reporting.