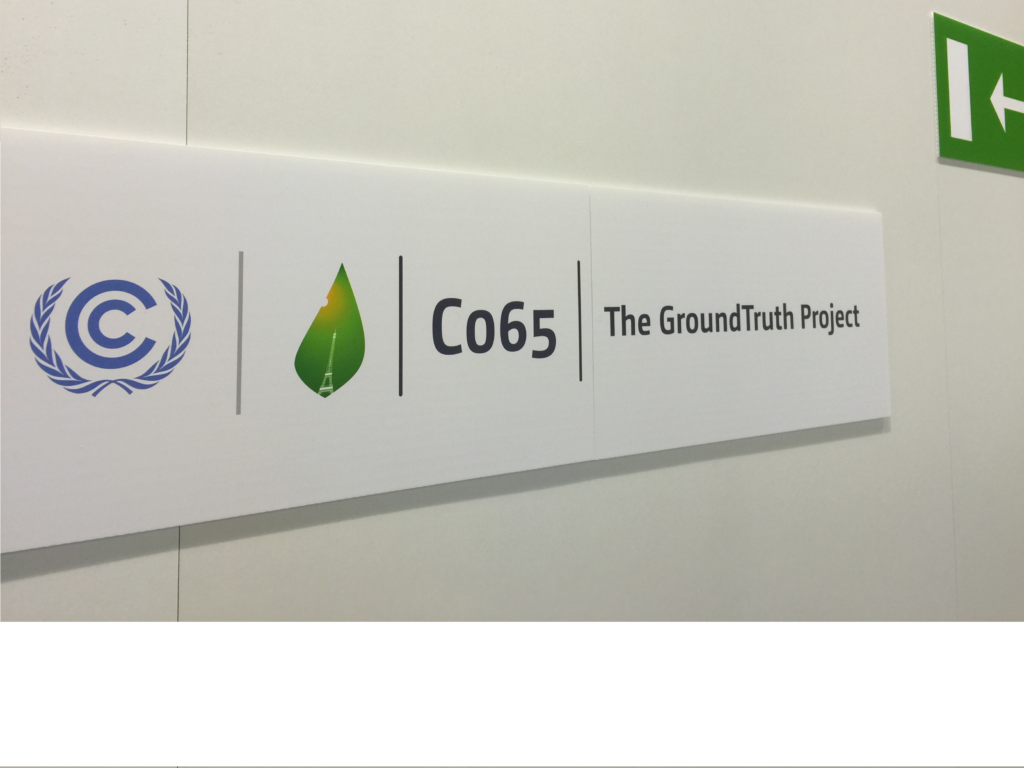 The GroundTruth Project's workspace at the COP21 conference center. (Photo by Charles Sennott/GroundTruth)

LE BOURGET, France — As international journalists, we travel quite a bit. More than a bit.

And that’s not counting layovers or domestic travel — or commuting by car.

Covering the effects of climate change, we often feel uneasy about all this travel. At home we try to make smart energy decisions — we recycle, buy LED bulbs, use Nalgene water bottles, take public transportation. But on the road, it’s an uphill battle to be anything close to eco-friendly. Booking our trip to cover the United Nations Climate Conference in Paris made this concern even more pronounced: How do we justify that our travel to cover negotiations about limiting carbon dioxide emissions itself generates significant emissions?

One flight from Boston to Paris alone emits 0.81 metric tons of carbon dioxide equivalent. A flight from Nairobi to Paris emits 1.77 metric tons. Altogether, just getting our team to Paris produced over 10 metric tons – about the same amount that an average citizen from the Netherlands or Czech Republic will produce in an entire year, according to the World Bank.

For years now, offsetting carbon has been one way to counter carbon emissions. Nonprofit organizations and companies have sprung up to help people “reduce what you can” and “offset what you can’t” – in the words of one such group, Carbon Fund — by paying for projects that mitigate climate change, like building wind farms in India or conserving forests in the Amazon.

The emphasis on offsets has many critics, with some claiming that offsetting carbon can negatively impact the climate by reducing incentives to move toward a clean energy economy.

They argue that offsetting could actually increase carbon emissions.

“For an offset project to be genuinely low-carbon, it must guarantee that it does not stimulate further emissions over the subsequent century,” wrote Kevin Anderson, a professor energy and climate change at the University of Manchester, when he was faced with a mandatory carbon-offset fee to attend an environmental conference in 2012. Offsetting, in his view, is “worse than doing nothing.”

And Leo Cerda, an activist with Amazon Watch, said “offsets are not important.” He said he would rather focus on preserving the Amazon, seeing the carbon offset industry as merely capitalizing further on the rainforest.

But Christiana Figueres, the head of the UN Framework Convention on Climate Change, disagrees. Launching a new UN effort tied to the Paris climate talks in September, Climate Neutral Now, she called for everyone to measure, reduce and offset their emissions.

The UN is striving for climate neutrality, and you can see signs of its efforts just walking the halls of the COP21 conference. Everyone is gifted a refillable water bottle, conference goodie bags are made from recycled sweaters and the plastic coffee cups are reusable.

Getting into the spirit, the GroundTruth team decided to offset our trip through Climate Neutral Now – the UN-certified program. In less than 5 minutes, we offset our carbon emissions by investing in wind power projects in India.

It was a nominal cost — around $1 per person — and something we likely wouldn’t have noticed had it been attached to the cost of our flight. Yet such a fee is not included in airline ticket costs, though some airlines like Virgin Atlantic and United offer voluntary programs on their websites.

If you find yourself as intrigued by this whole process as some of our fellows did, check out this carbon footprint calculator — you can estimate how many tons of carbon you emit per year, for instance, depending upon your lifestyle and decisions.