As South Korea impeaches its president, here’s a brief history of the nation’s democracy 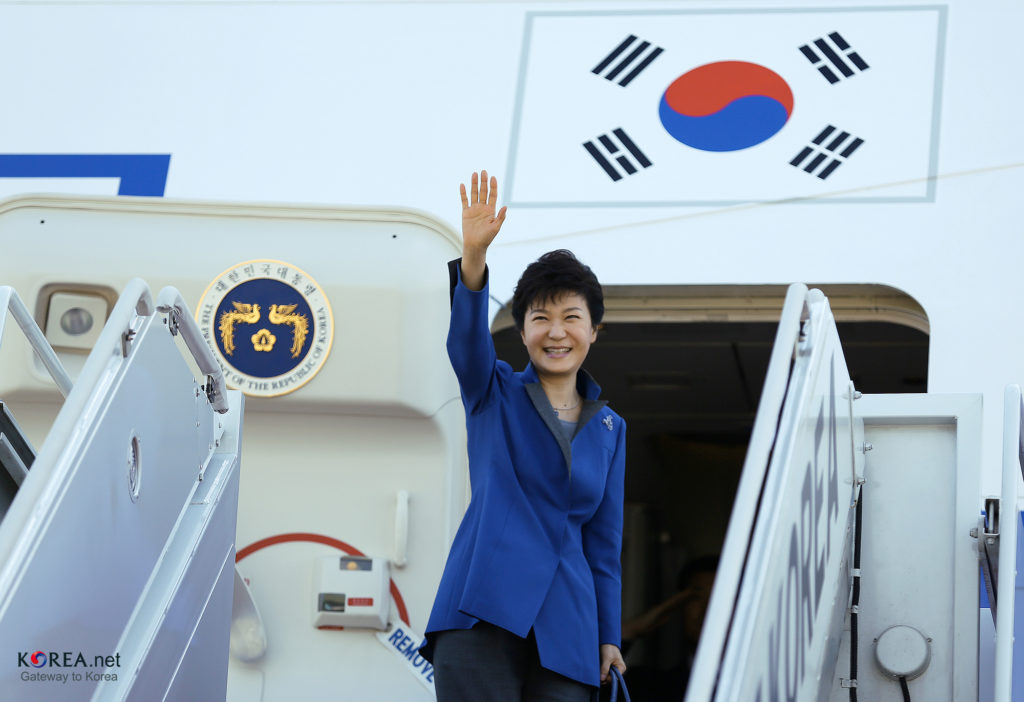 President Park Geun-hye waves to the crowds at Seoul Airbase in October 2013. (Photo by Republic of Korea/Flickr User)

South Korea just voted to impeach its president. Here’s a brief history of the nation’s fledgling democracy, which might’ve just proved that it’s stronger than ever.

For weeks, millions of South Koreans have returned to Seoul’s Gwanghwamun Square like clockwork, calling for President Park Geun-hye to resign after she allegedly used a close friend, Choi Soon-sil, as a secret political advisor for years. Park also allegedly allowed Choi to extort money from major companies, a repeat mistake among corrupt politicians in South Korea’s relationships-focused culture.

Collectively, it’s the biggest protest since the nation’s overthrow of an authoritarian military regime in 1987, which led to the birth of South Korea’s democracy.

“These are probably the largest and most sustained protests we’ve seen since country’s initial transition to a democracy,” said Scott Snyder, a senior fellow of Korea studies at the Council on Foreign Relations in Washington, D.C. “1987 and now 2016 are going to go down as points in time when really broad representations of society came out in order to protest Korean politics.”

That initial transition happened in 1988 when Roh Tae-woo, a South Korean army general, was elected. But Roh Tae-woo wasn’t exactly a force for change when it came to keeping the military out of politics. In fact, he was scandal-ridden: Roh himself only won the election because the majority of votes were split between two major opposition candidates, for one. But he was also eventually sentenced to death, then life in prison (later overturned out of mercy) for his role in the Gwangju Uprising in 1980, when as many as 600 citizens were killed after taking up arms against government troops, who had previously beaten and killed Jeonnam University students for protesting the government. Roh’s predecessor, President Chun Doo-Hwan, had spun the massacre as an insurgence of Communist sympathizers and curtailed the press. In other words, much of South Korea’s early history involves a string of corrupt leaders.

The current president’s father, Park Chung-hee, led the nation’s rapid industrialization from one of the world’s poorest countries in the 1960s to the 12th-largest economy as of 2014. And although that economic development is what leads some to view his legacy favorably, Park was hardly a democratic leader. He’s responsible for a number of human rights abuses, including declaring “states of emergencies” under a document called the Yushin Constitution, which justified jailing and killing protesters and explicitly allowed him to limit press freedom. Park Chung-hee also set himself up for multiple terms, though his presidency ultimately ending in 1979, when he was assassinated by his own chief of security.

“At that time, the Blue House told major newspapers what to run and where to place the articles,” Snyder said. “Now, South Korea’s overall situation is much better than it was during the authoritarian period.”

That’s certainly true. South Korea’s democracy has seen better days, but the election of President Lee Myung-bak in 2008 brought another wave of limitations to speech and the press. And since Park Geun-hye took office in 2013, she has sued journalists, jailed opposition leaders and censored the press, operating under laws that can still bring criminal defamation charges to factual reports and that can jail Koreans for up to seven years if they praise North Korea. In late 2016, an elderly protester died from injuries he suffered the year before, when police officers water cannoned anti-government protesters. For many, that was a tipping point.

“South Korea clearly could do better and, as a democracy, you would expect South Korea to do better than it actually does at this stage,” Snyder said. But he generally believes that the nation’s democracy is strengthening. Case in point: these massive protests, which have generally remained peaceful.

“The fact that these protests are able to go forward is a clear manifestation that democracy has taken route,” he said. “There are still various issues in the media-government relationship, but generally speaking, the trendline has been in the right direction.”

But even with a Park impeachment, Snyder says that South Korea will face other challenges. For one, a court will have to uphold the impeachment, which could take up to 180 days. While we wait, Prime Minister Hwang would become the acting president and Park would be restricted to just the residential parts of the Blue House.

“What would happen in a crisis? Let’s say North Korea decides to invade on Sunday … The acting president would be empowered to make decisions, but anybody who has the word ‘acting’ in front of their name also has limits in terms of what they can really do,” Snyder said. “It’s really kind of a political vacuum until this is resolved.”

Update: President Park Geun-hye’s impeachment was upheld by courts in a 8-0 unanimous decision on March 10, 2017. An election for South Korea’s next president will take place within 60 days of the impeachment.