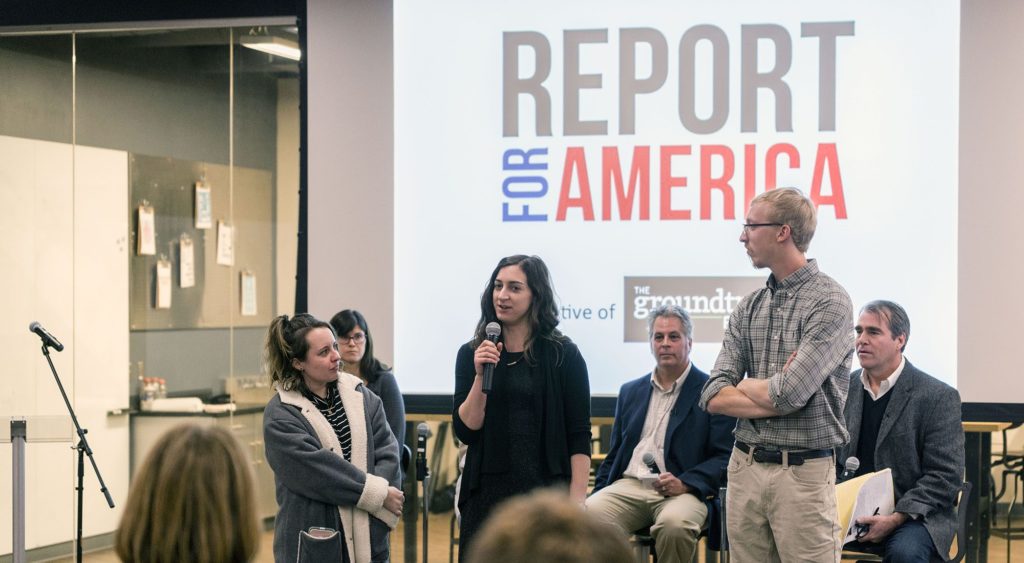 Report for America corps members (standing, from left) Caity Coyne, Molly Born and Will Wright, arrived in West Virginia in January to meet their host news organizations and to receive training from GroundTruth and other partners. (Photo by Jesse Wright/WVPB)

BOSTON — The GroundTruth Project, a nonprofit news organization that supports and inspires a new generation of journalists, is pleased to announce three new funding partnerships that will provide a total of $650,000 in multi-year funding for GroundTruth’s new initiative, Report for America.

The John S. and James L. Knight Foundation, the Tow Foundation and Craig Newmark Philanthropies have partnered with GroundTruth to support Report for America in its efforts to place 1,000 local reporters in host newsrooms across America over the next five years.

In this first pilot year, Report for America placed three reporters in rural Appalachia newsrooms across West Virginia and Kentucky. Next month, ten more Report for America “corps members,” as the reporters are called, will be deployed to serve local communities in the Mississippi Delta, Texas, Chicago, Pennsylvania and beyond. With a dedication to public service, the reporters are seeking to help host newsrooms address under-covered corners of their community.

“The crisis in local journalism has become a crisis for our democracy, and we believe Report for America can be part of the solution to restoring trust in journalism. We’re honored by the support for our mission and we are eager to see Report for America become a movement,” said Charles Sennott, Founder, Chief Executive Officer and Editor of GroundTruth.

“The interest in Report for America has been extraordinary — a deluge of high-quality reporters and newsrooms want to participate. Now we are looking to expand our operations in the coming years and this round of investment will help make that possible,” said Steve Waldman, President of Report for America.

There were 740 applications to RFA for 10 reporting positions, and a total of 85 newsrooms applying for 8 RFA host newsroom slots in this round. In June, the new class of Report for America corps members will gather in Florida at the Poynter Institute and the Investigative Reporters and Editors conference for training and workshops to prepare these early-career journalists for their one-year postsings at our host newsrooms.

In the months ahead, Report for America will put out a call for another round of applications from prospective host newsrooms and aspiring journalists. We are focusing our efforts on news deserts around the country where local reporting has been diminished or cut by the economic realities of journalism at a time of great disruption and change.

This includes a plan to continue to build upon Report for America’s successful launch in rural Appalachia, seeking to expand our presence there. But we are also aware that news deserts exist in urban areas as well, and we want to respond to need in those communities. The Tow Foundation, for example, will be supporting RFA corps member positions at newsrooms in New York and Connecticut with a focus on social justice reporting. And we will be looking to continue to place RFA corps members into every corner of the country particularly in communities that are not being heard.

“Report for America’s goal of launching the careers of aspiring journalists, while providing essential support for quality local journalism, is directly in line with The Tow Foundation’s efforts to educate the public on social justice issues. We are confident that the media partners in New York and Connecticut and the communities they serve will benefit greatly.” said Emily Tow Jackson, Executive Director and President, The Tow Foundation.

Jennifer Preston, Vice President for Journalism at the Knight Foundation, said, “Local newsrooms are among the most trusted. However, in the last decade, many have reduced the reporting teams that once provided residents with in-depth local news and information to understand civic issues and hold elected officials accountable. Report for America is developing a path to replenish the ranks of public service journalism in local communities at a time when trust in media is at an all-time low and most new media jobs are located on the East and West coasts.”

Momentum is building behind Report to America as it works to strengthen journalism and the profession’s role in a healthier, more vibrant society.

“Report for America is helping to enrich local communities and restore trust in journalism,” said Craig Newmark, Founder of craigslist and Craig Newmark Philanthropies. “By sending talented reporters to news organizations in parts of America that are infrequently covered by the media, it’s revitalizing the journalism industry and, ultimately, strengthening our democracy.”

Report for America is the only nonprofit journalism initiative in the U.S. that combines public service with its mission to cover the news. Launched in 2017 and donor-financed, Report for America is creating a new, sustainable system that strengthens communities and journalism. Our mission is to deploy talented, service-oriented journalists into undercovered areas, provide Americans with the information they need to improve their communities, hold powerful institutions accountable, and rebuild trust in the media. Report for America is an initiative of The GroundTruth Project, an award-winning nonprofit media organization with an established track record of training and supporting teams of emerging journalists around the world and in the US.

The GroundTruth Project is a Boston-based, independent, non-partisan, non-profit news organization dedicated to supporting the next generation of journalists in the US and around the world. In the last five years, GroundTruth has supported 150 reporting fellowships as far away as Myanmar, Egypt and Somalia and as close to home as Kentucky, Minnesota, and Montana. Our newest initiative ‘Report for America’ seeks to address a crisis in local journalism in America which has become a crisis for our democracy. By deploying RFA corps members into RFA host newsrooms for one year of public service reporting, RFA is trying to create a movement to restore trust in journalism and serve communities that need better coverage of the issues in their community. For more, visit www.reportforamerica.org

About the Tow Foundation

Established in 1988 by Leonard and Claire Tow, the Tow Foundation funds projects that offer transformative experiences to individuals and create collaborative ventures in fields where they see opportunities for breakthroughs, reform, and benefits for underserved populations. Investments focus on the support of innovative programs and system reform in the areas of juvenile and criminal justice, groundbreaking medical research, higher education, and cultural institutions. For more information, visit http://www.towfoundation.org.

About the John S. and James L. Knight Foundation

Craig Newmark Philanthropies was created in 2016 by craigslist founder Craig Newmark to support and connect nonprofit communities and to drive powerful civic engagement. The organization works to advance people and grassroots organizations that are “getting stuff done” in the areas of trustworthy journalism, voter protection, gender diversity in technology, and veterans and military families.