Gripped by opioids, American addicts must be patients first 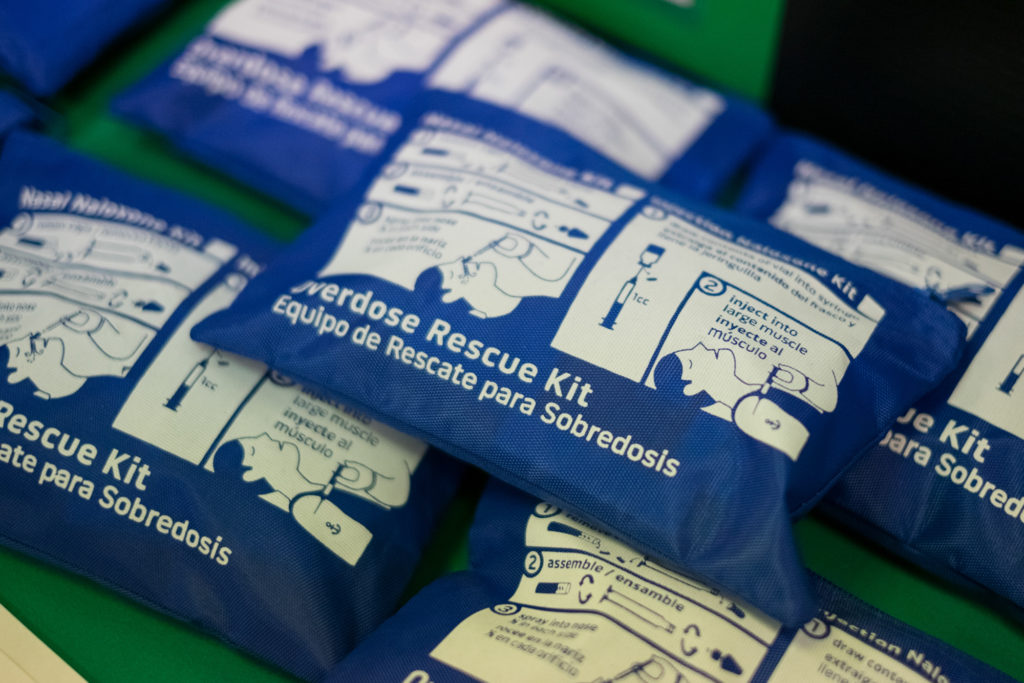 Naloxone rescue kits sit on the table at a drug clinic. (Photo by Edwin Torres/GroundTruth)

NEW YORK — The opioid crisis is now the worst drug epidemic in American history and it’s expected to get much worse.

Overdose deaths are rising more quickly than ever before, killing 59,000 people in 2016, according to new analysis by The New York Times. The Times’ analysis also finds drug overdose is now the leading cause of death for those under 50 in the United States. And opioids alone could kill 500,000 Americans in the next decade, says a panel of public health experts polled by STAT in data released this week.

As American lawmakers negotiate a health care bill that experts say would further weaken the country’s capacity to fight and treat drug addiction, a group of leaders in medicine, law enforcement and media gathered to take stock of how we got to this point, listen to stories from the frontlines of the crisis — and talk about what we should do next.

“In the 1990s we had a ‘pain revolution,’” journalist and author Sam Quinones told the audience at an event presented by The GroundTruth Project in partnership with the Northwell Health Foundation, and hosted at the Paley Center for Media.

Quinones added, “Pharmaceutical companies pushed the idea that pills were non-addictive and the marketing worked. We won the Cold War and there was this feeling of, we want things easy. We began to believe these things because I think it was easy to believe.”

Quinones, who wrote “Dreamland: The True Tale of America’s Opiate Epidemic,” has helped awaken the American public to the reality of spiking opioid addiction. We now know that hyper-aggressive marketing of painkillers to doctors beginning in the 1990s paved the way for extreme overprescription of increasingly powerful opioids to misinformed patients. Communities already grappling with economic disenfranchisement, faded industrial towns where work accidents often lead to years of pain and a culture that wants to never feel pain are awash in astoundingly potent prescription pills.

That wave of prescriptions increasingly includes the powerful drug fentanyl and street drugs like heroin (which is now being laced with fentanyl) as addicts struggle to find treatment programs and turn to the black market to feed their addiction.

Thirty years after Oxycontin hit the market in 1996, opioids have destroyed so many lives because the American healthcare system is ill-equipped to help them. Dr. Sandeep Kapoor, director of Northwell Health’s Screening, Brief Intervention, and Referral to Treatment service, offered an incredible statistic: just one in ten Americans who need substance abuse treatment receive it.

“It’s unimaginable that we’d accept that with other diseases,” Kapoor said, arguing that medical culture must shift along with budgets, so that doctors can identify addiction without judging their patients, and prescribe care that includes medication and rehabilitation programs.

Kapoor is part of a relatively small group of local leaders in medicine, law enforcement and media who are pushing the still surprisingly unpopular idea that addicts should be treated as patients, rather than criminals, if we want to reduce overdose deaths.

Robert K. Boyce, NYPD Chief of Detectives, is also part of the group, which brought expertise and fresh thinking to the Paley Center event Tuesday night.

“We’re not looking to arrest addicts, Boyce said. “That’s not what we’re about. We’re looking to get at the distributors. We’re all in this together. [Addiction has] happened in every family, it’s happened in my family.”

Shadowing the discussion was grave concern that the health care bill now under negotiation in the Senate could undermine efforts to help.

“Anyone from a state that has an opioid problem and votes to cut down on Medicaid, they should have their heads examined,” said Michael E. McMahon, the Staten Island district attorney and a former U.S. representative. “Drugs covered under Medicaid helped get them addicted, Medicaid should help get them off of it as well.”

With Republican supporters of the bill like Senate Majority Leader Mitch McConnell getting pressure from constituents in heavily affected states (McConnell represents Kentucky), the Congressional Budget Office estimated that the bill as drafted would cause 22 million fewer Americans to have coverage by 2026, including 15 million fewer people enrolled in Medicaid.

That’s significant because Medicaid is the single largest source of funding for addiction services in America, a country that already does a miserable job providing care to people struggling with opioid abuse and other drug addiction problems.

This week Vox Media reported that one of the country’s largest insurers, Blue Cross and Blue Shield, “recorded a 493 percent increase in people diagnosed with opioid use disorders from 2010 through 2016. At the same time, there was only a 65 percent increase in the number of people using medication-assisted treatment.”

And as new traumas hit Americans, from California to Appalachia to Staten Island, opioids remain readily available to ease the pain.

“This is truly a public health and public safety problem,” said McMahon, the Staten Island district attorney. “No matter where I go, no matter what I’m supposed to be talking about, this is all I talk about.”

Staten Island was one of two boroughs covered in the GroundTruth podcast season called “The Fix,” produced in partnership with the City University of New York and with support from the Northwell Health Foundation, to explore the past and present of opioid addiction in New York City.

The podcast, excerpts of which were played for the audience, traced the history of opioids in New York from the heroin epidemic in the 1970s in largely Black and Hispanic neighborhoods, such as the Bronx, to the more recent rise of prescription opioids across more white and middle class communities, such as Staten Island.

For the audience and panelists at the Paley Center, that history prompted questions about the racial dimension to the kinder, gentler police and prosecutorial approach to drugs, now that more white youth are addicted to opioids. McMahon rejected that interpretation, calling for unity between local communities, the press, the police and hospitals, laying the blame squarely upon the shoulders of “evil, corporate Big Pharma.”

Toward the end of the evening, Dr. James Baker rose from the first row of the theater to share his own story, a personal narrative that he hoped would help people put a face to all of the numbers and the data that frame the debate.

“It’s easy to lose what this means in real life,” said Baker, an emergency physician in Massachusetts. “You’re looking at it.”

He told the story of his youngest son, Max, who as a teenager moved from abusing painkillers to heroin before entering rehabilitation and getting on the road to recovery.

Eventually, he headed to college, falling in love and finding happiness. Then last year, the night after Thanksgiving, Max was injured in a car accident and needed surgery. Despite informing doctors of his prior addiction, he was given standard procedures for pain management which included an injection with fentanyl.

“The first thing he said after surgery was, ‘I need drugs.’” Baker said. His son relapsed, fell deep back into addiction, and overdosed at Christmastime.

The story drew gasps from the medical professionals, law enforcement, recovering addicts and journalists who had gathered. The room applauded Baker for his courage in sharing the story and taking on a role as a national advocate for addicts and families touched by opioid abuse. In that brief collective moment of empathy, the audience seemed to take in just how personally devastating this epidemic can be.

More about ‘The Fix’