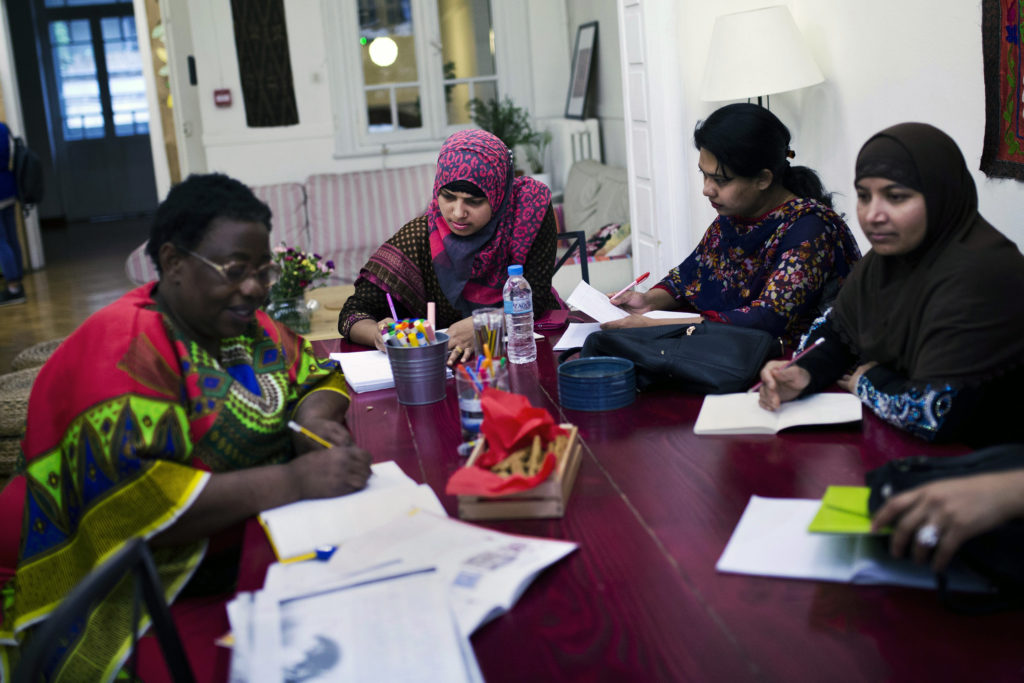 Women from Bangladesh study the Greek language with the help of Melissa Network.

Up a flight of stairs in an old Athens mansion, Mabel Francisca Mosana, a 51-year-old South African migrant, teaches Greek women to “shake it like Beyonce” through traditional Zulu tribal dances.

“I consider myself Greek, but the society doesn’t,” she says. She married a Greek man, and their daughter, a Greek citizen, plays women’s basketball for an Athens sports league. “The country still has a long way to go in accepting others.”

Mosana’s classroom in Melissa, a center for migrant women, is a far cry from her minimum-wage job with a cleaning company. Here, her students are her peers – they’re Greek women and friends from other migrant groups united by their quest to build new lives in Greece.

“Migration entails a rupture: a break from your roots, your past, your family ties and social support networks you had back home,” says Greek anthropologist and Melissa Network Co-Founder Nadina Christopoulou. “As a woman in a new country, you’re lacking those support systems that help you go through different stages of life. Women experience this in a more intense way than men do.”

The center, which opened last July, has become a sanctuary for migrant women at a time when Greece finds itself at a crossroads of crises: growing civil unrest over the country’s prolonged economic decline, an unstable government and pressure from Europe to control the world’s largest refugee crisis since the second World War. In the midst of rising xenophobia, Melissa is a testament and a kind of prayer to the spirit of a country that has long welcomed refugees and migrants.

“Migrant women experience double marginalization as women and migrants, but they’re agents of change,” Christopoulou says. “They’re integrators because of their children. They’re multipliers. For every tiny thing you give them, they multiply.”

Melissa began taking shape years ago when Christopoulou sought to bridge some 24 existing migrant groups in Greece run by women from Eastern Europe, parts of Africa and South Asia. The groups had joined forces through the years to demand citizenship for their children, many of whom, despite being born in Greece, are still treated as temporary residents by Greek law. Christopoulou wanted to leverage the unity into a sustainable movement and house the groups under one roof. With funding from Solidarity Now, a Greek nonprofit supported by Open Society Foundations, the migrant women’s groups opened the center as their communal headquarters.

“Melissa” is the Greek word for honeybee, a nod to women’s resourcefulness. While the center’s beautiful, airy grounds and sun-checkered garden are fit for a magazine spread, the women aren’t simply gathering for afternoon tea. They want to effect change and create opportunities for themselves and others. The center hosts Greek language, theater and poetry courses — often led by migrant women themselves, who are paid for their time. Christopoulou points to how the Filipina community created their own microfinance program 17 years ago to help fund the educations of their children and trips back home. To this day, every loan has been paid back. It’s a model Melissa hopes to scale through the center. They’re also raising money to rent an adjacent kitchen so women can cook and sell their specialties.

But Melissa is swimming against a powerful tide. Their multicultural haven is purposely nestled in the middle of a neighborhood that doesn’t want them there. Melissa is located near a stronghold of Golden Dawn — the xenophobic, extreme right-wing group that took 7 percent in last September’s national election and is now Greece’s third-largest party. It gained popularity in the face of an economic crisis, making migrants the scapegoats for the country’s hardships. On the islands of Kos and Lesbos, the epicenters of the refugee crisis, Golden Dawn’s support has doubled. On Athens building walls throughout the neighborhoods surrounding Melissa, graffiti declaring, “Refugees Welcome” competes for space with fascist slogans and Golden Dawn’s logo, which resembles a swastika.

Golden Dawn’s manifesto calls for all “illegal immigrants” to be rounded up, detained and sent home. Its members, who have been seen giving Nazi-style salutes, envision a “Greece for the Greeks” and call for tax breaks to boost low birth rates so Greeks won’t “become a minority in our own country.”

Amidst the hateful discourse, Christopoulou says she doesn’t want Melissa to be a self-contained, multicultural ghetto in the middle of a sea of hatred. Their motto is integration — something they say a series of Greek governments has failed to do with migrants who have contributed greatly to the country’s economy. The women have reached out to their naysayers through open dialogue in an attempt to dismantle notions of the Other. They have hosted Golden Dawn members and frequently invite their unaffiliated neighbors to events. Last summer, they engaged the neighborhood in helping support Greece’s refugees — a crisis which, for the moment, has overshadowed the plight of Greece’s existing migrants.

Greece has become a transit hub for the 1 million Syrian, Iraqi and Afghan refugees who poured into the country over the past year. They would follow the migrant trail by boat, foot, bus, and train all the way up to Germany. But in March, Macedonia closed its southern border, leaving some 54,000 refugees stranded in Greece and transforming the country into an unwanted layover.

“We don’t feel welcome here, but we don’t have other options,” says Fatima, a 34-year-old Iraqi mother of three who is sharing a small apartment with fifty people near Victoria Square, a hub for migrants and refugees that is located just one block from Melissa. “If we could leave tomorrow, we would. But for now, we want to try to build our lives here.”

As Victoria became a makeshift tent city for refugees at various points in the past year, Melissa has reached out to neighbors and shops for help putting together meals and supply bags for stranded women and children.

In small ways, Melissa’s members saw once-closed residents opening up to the idea of the Other. The lady at the bakery across the street began cutting bread so slices were slightly thicker; the local grocery store would bring them extra fruit and even help them distribute food in the square. From small acts, a ripple, they hoped.

“It’s important to give the message to Greek society that migrants aren’t part of the problem, but part of the solution,” Christopoulou says.

Maria Ohilebo, a Nigerian chef and one of the center’s founders, came to the center one recent Saturday to drop off some of her famous banana bread. When she moved to Greece more than 20 years ago, she said many bakeries wouldn’t hire her. Now, she works for a high-end pastry shop.

“I try to share through my desserts,” she says, laying out the bread and some chocolate cake at the center. “It’s how I express myself.” Nearby, Jennifer “Click” Ngwere, from Zimbabwe, knitted sweaters which she will later sell. Ngwere often volunteers in Athens’ refugee camps, leading knitting circles that have become de facto safe spaces for women trying to rebuild from the ashes of their past.

It’s a model Melissa believes will counteract the dark identity crisis of a country that gifted the world Socrates and Homer.

“You don’t change hearts and minds by preaching and waving your finger,” Christopoulou said, biting into Ohilebo’s delicious bread. “You do so by setting a good example … by spreading love.”

This article was published in The New York Times’ Women in the World.