Refugees in Greece, a Warehouse of Souls 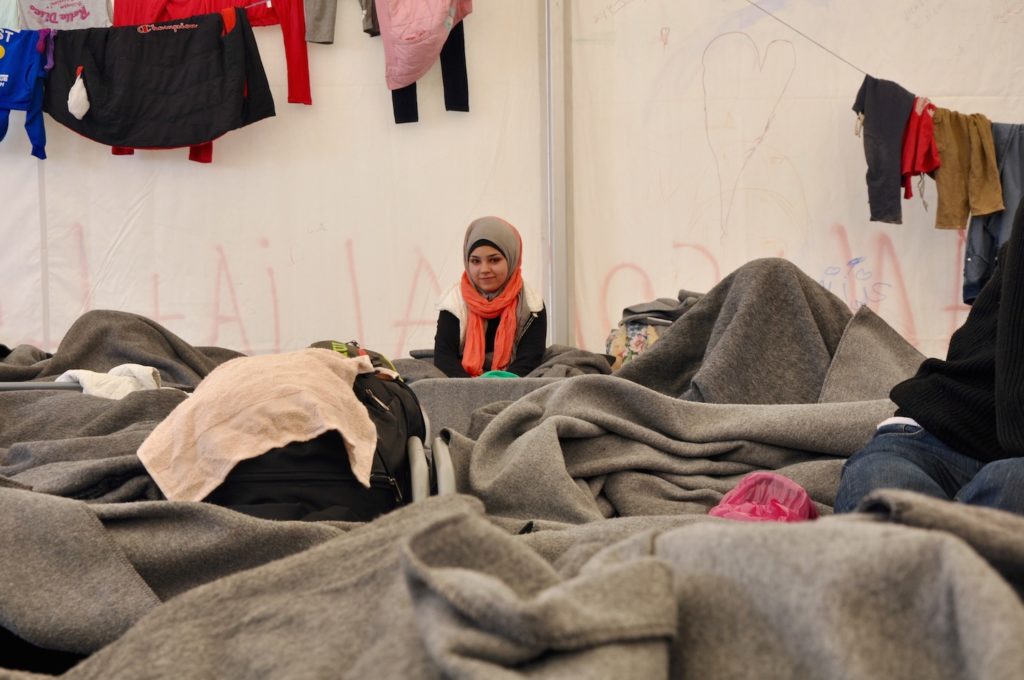 Sixteen-year-old Hameeda from Aleppo, sits among a series of bunk beds in Idomeni camp on the Greece-Macedonia border. (Photo by Lauren Bohn/GroundTruth)

By Lauren Bohn and Tania Karas

LESVOS, Greece – Through a barbed wire fence, 17-year-old Syrian refugee Asma attempted to tell us about her journey to Greece. We didn’t have much time to listen. Greek police officers were breathing down our necks, threatening to arrest us unless we left.

We learned that Asma traveled alone on a tiny rubber boat from Turkey, and broke her arm – still wrapped in a white bandage – when a building collapsed in her hometown of Daraa, the birthplace of the Syrian uprising. As she started to tell us about her hope for a fresh start in Germany, the policemen issued their final warning before escorting us off Moria camp’s fenced perimeter.

If Turkey is a crowded departure hall to a better life, Greece is now a transit lounge for those who’ve missed their connection. Many will never move onward to northern Europe; others will only move backward. With more than 52,000 refugees and migrants stranded in the country, Greece has become exactly what Prime Minister Alexis Tsipras warned months ago: a “warehouse of souls.” And the new deal between the European Union and Turkey, intended to stem the refugee flow into Europe, only redirects it.

Under the terms of the deal, most asylum seekers who illegally travel to Greece from Turkey are to be sent back to Turkey. The first returns took place Monday at dawn. For every returnee to Turkey, a Syrian living in a Turkish refugee camp will be legally resettled by plane to EU countries.

As such, a refugee’s rights in Europe come down to luck. If Asma had arrived in Greece last month, she’d likely be in Germany by now. If she had arrived three weeks ago, she’d likely be trapped in a makeshift camp on the Greece-Macedonia border – not much of an upgrade, but she’d have more access to the outside world than she does in Lesvos, where more than 3,000 refugees are locked in a former military base. For refugees like her, who arrived after the deal took effect March 21, most will be sent back to Turkey; that is, unless they can individually prove Turkey is “unsafe” for them. Even many Syrians, Iraqis and Eritreans – who have special protections under international law and qualify for the European Union’s official “relocation” program – will be returned to Turkey.

In exchange for absorbing the migrants, the EU will give Turkey up to $6.6 billion to help manage the influx of people; allow Turkish citizens to travel visa-free throughout most of Europe; and continue to consider Turkey’s admission to the European Union

EU officials insist the deal isn’t about restricting access to asylum in Europe, but eliminating illegal smuggling routes that sent more than 1 million refugees and migrants to Europe from Turkey over the past year. Indeed, as ferryboats carrying migrants returned to Turkey on Monday, Syrians from Turkish refugee camps were being resettled in Germany and Finland.

But this “one-for-one” deal struck in Brussels – which creates a kind of human carousel – is disconnected from the reality on the ground in Greece. The deal’s byzantine complexities have sowed confusion, fear and anxiety among asylum-seekers and authorities alike. Humanitarian groups such as the United Nations refugee agency, Doctors Without Borders and Save the Children have suspended activities on several Greek islands to protest its terms. They argue the deal turns reception centers for refugees into inhumane, de facto detention facilities.

The deal also paints Turkey as a “safe” country of asylum. But human rights groups take the opposite stance. Amnesty International says it has evidence Turkey is illegally rounding up and expelling groups of around 100 Syrian men, women and children to Syria on a near-daily basis. And just hours after the EU-Turkey deal took effect last month, Turkey forcibly sent back some 30 Afghan asylum-seekers to Afghanistan.

“In their desperation to seal their borders, EU leaders have willfully ignored the simplest of facts,” said John Dalhuisen, Amnesty’s director for Europe and Central Asia, in a statement Friday. “Turkey is not a safe country for Syrian refugees and is getting less safe by the day.”

‘Turkey is not a safe country for Syrian refugees and is getting less safe by the day.’

For Greece’s part, the deal demands enormous logistical efforts of a country hobbled by six years of financial crisis.

On Friday, Greece’s parliament passed a bill aimed at streamlining the asylum process so that new applications, including appeals, will be decided within two weeks. Large-scale returns of Syrian refugees to Turkey could begin later this month. But there are signs of system failure before it’s even begun. According to the UN refugee agency, only three officers from the Greek Asylum Service are operating in the Moria camp on Lesvos to deal with more than 2,860 asylum applications.

Asylum-seekers arriving on the Greek islands will now be subject to an “inadmissibility check” before Greek authorities consider their asylum claims, according to Jean-Pierre Schembri, a spokesman for the European Asylum Support Office, an EU agency that helps member-states implement asylum procedures. Those who can’t prove Turkey is unsafe for them will be returned. Criteria for just what “unsafe” means have yet to be determined. Still, the added hurdle sets an unfairly high bar for asylum-seekers, the majority of whom are Syrians and Iraqis fleeing war.

The whole process could drag on indefinitely.

Additionally, as the ferries of 202 returned migrants to Turkey set sail from Lesvos and Chios on Monday, 228 new refugees arrived on the Greek islands. The human carousel continues.

Even the more than 46,000 refugees stuck on the Greek mainland — who are not subject to returns under the new deal — are languishing without answers of their own.

As journalists on the ground, we have too often become the first point of contact for refugees confused by tone-deaf, dehumanizing decisions made in Brussels. But we rarely can elucidate the deal or offer answers.

After Macedonia closed its border with Greece in early March, the Khamees family sought shelter in the squalid Idomeni camp on the Greece-Macedonia border. The family of four from Damascus now lives on a tiny sleeper car of an abandoned train on cross-country tracks. It’s a cruel, bitter irony for a people stuck in place.

“We’ve never been on a train before,” says Amira, squished against the car’s dusty window and her 3-year-old daughter. “And now we’re on a broken train,” laughs her husband from a small bed above.

We spent almost an hour with the family, introducing them to NewsThatMoves.org, a nonprofit website that seeks to combat rumors and misinformation among asylum-seekers in Europe. But from Idomeni, all they could do was sign up for an asylum interview via Skype – a tall order for people with no cellphone data or wifi access. And the line is always busy.

Even Idomeni camp’s younger, tech-savvy middle class has no idea what’s going on.

“We can’t believe we’re in this situation as refugees with no information… we’re just normal people,” Rashan said, heating a pot of water over an open fire so his wife could take a shower in a vacant camping tent. They had poked a hole in its corner for drainage. “Even the word refugee makes us sound alien.”

The 34-year-old French literature graduate student and his 27-year-old wife, Medea – an English literature buff – were married eight months ago in Aleppo. They joke that they’re now spending their honeymoon on a camping trip.

One night last week in Idomeni, we took the charming couple to a small “concert” not far from their tent. They were excited to ride in a car again, to finally feel movement.

One of our Syrian contacts-turned-friends, a 23-year-old musician from Damascus, had brought his electric guitar on the journey. In front of a Western Union that has recently popped up to fulfill a huge demand, he freestyled riffs from ACDC, Led Zeppelin and Jimi Hendrix — all of which he learned how to play via YouTube. Rashan and Medea stood hand-in-hand dancing along, losing themselves in the music, in the near-normalcy of it all.

When we got in the car to drive them back to their tent, Rashan’s smile crumbled into dread. He threw his face in his hands.

“How did we get here?” he asked into the cold night. He refuses to tell his family and friends back in Syria about the real conditions in Greece. It’s embarrassing, he says, after they risked so much for a modern-day Homeric odyssey that they read about in college. And for what? For this? An open-air warehouse of crushed dreams?

“All these amazing people, with so much potential,” he said of the guitar player, of Medea, of himself. “How did we end up like this?”

Once again, we didn’t have answers.

A version of this article was published on Reuters.