ON THE GROUND IN FRANKFORT, KY 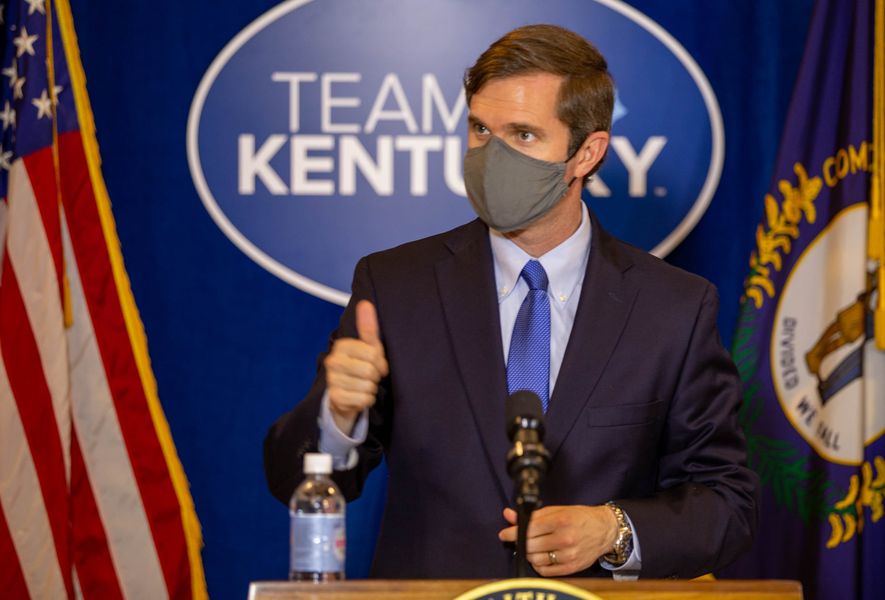 The Democratic leader’s candor and dad-like demeanor exploded his fan base. Thousands of people tuned into his daily coronavirus updates. Dozens of new, Beshear-centric memes peppered Twitter and Facebook. His “we can’t be doing that” became a refrain on social media whenever he learned of people violating his executive orders to slow the spread of the deadly virus.

Now, more than seven months later, as the spread of the virus — and disinformation about the virus — is worse than it has ever been, COVID-19 fatigue among some has given way to frustration, even aggression.

It’s also caused Beshear’s approval ratings to plummet, according to a survey by the COVID-19 Consortium for Understanding the Public’s Policy Preferences Across States. It went from a high of 79% in late April to 58% in late August. A more recent Mason-Dixon poll released late this month shows his approval rating at 53%.

The anger with Beshear was on full display in late August when a group of about 30 parents and their children protested on the steps of the State Capitol in Frankfort, calling for the governor to let students attend in-person school. They held signs that said, “We understand the risks, allow in-person school” and, “They gave me a choice. YOU took away my voice.”

Until late September, Beshear had strongly recommended K-12 schools remain closed to in-person classes. The state had seen several record weeks of new cases, and deaths were on the rise.

Many parents, however, didn’t think Beshears’ response was reasonable. They wanted the option of sending their kids to school. Having that option largely revoked convinced the group their freedom of choice had been snatched.

Most of the sentiment was predicated on a belief that the dangers of the virus had been overinflated. None of the parents interviewed for this story trusted the state’s numbers. Most cited the popular point by COVID-19 deniers: that the flu is more dangerous. It isn’t, according to federal infectious disease specialists.

By mid-August, the novel coronavirus had killed just over 800 people. Over the last four years combined, the flu had killed close to 770, according to the state’s chief epidemiologist.

The latest numbers show the virus continues to infect and kill. The latest data show that nearly 98,000 Kentuckians have been infected with COVID-19, and more than 1,400 have died.

Back in March and April, save for one or two protests outside the state Capitol, the prevailing sentiment among Kentuckians, it seemed, was healthy fear. To get answers, many turned to state leaders for guidance.

The message they got was, if Kentucky didn’t try and mitigate the spread now, the consequences would be fatal. Through a series of executive orders, Beshear slowed much of normal daily life in Kentucky to a halt.

Adding to the fears: Kentuckians were told repeatedly that hospital systems would be overwhelmed and death rates could double or triple if the state took no precautions.

By May, it became clear the state had successfully blunted its curve, and the economy began to reopen. And boosting the governor’s response: A University of Kentucky study projected Beshear’s mitigation tactics helped save approximately 2,000 lives.

In March and April, hundreds, sometimes thousands, of people tuned into Beshear’s live streamed daily press conferences. Sarah, a woman I met at this small protest who didn’t want to share her real name, was often one of them.

A mother living in Lexington, she’d voted for Republican incumbent Gov. Matt Bevin, but said she’d been pleased with Beshear’s early response to the virus in Kentucky.

“I’ll admit, I hadn’t voted for Andy, but I was singing his praises and appreciated the leadership he was showing back then, because I thought it was necessary,” she said.

Her appreciation started to fizzle after Kentucky successfully flattened its curve. “We did what was asked of us as a state, OK? But then the goal post was moved.”

Today, Sarah views Beshear as “a wolf in sheep’s clothing” whose rhetoric is “divisive.”

The voice of dissenters only grew louder. And they suggested that they were being purposely being lied to, not only by the state, but by journalists.

“There’s a lot of misinformation out there,” said Mike Gosper, a retired EMT from Lexington. He wore a “Trump: Make Liberals Cry Again” hat.

In some ways, the governor’s success had worked against him. Four months in, even though the virus had killed hundreds of people in the state, many people still hadn’t experienced it firsthand. What they did experience were the restrictions, which thinned their patience.

Sarah told me that the virus, “it’s not what it’s been made out to be, in the least.”

She said when Beshear “started interfering with my children’s education” is what lit a fire in her. “I feel like our rights and freedoms as Americans are being gradually chipped away.”

Gosper agreed: “We know the virus is real, but we also know there is a risk-reward for every decision we make.”

For instance, people know there’s a risk of a car accident each time they get in the car, but they do it, anyway, he said.

At the August protest in Frankfort, multiple demonstrators I spoke with claimed no one was reporting the number of tests Kentucky had administered, the infection rate or the numbers of deaths and hospitalizations — data points I noted in my daily stories. Those interviewed often cited Fox News and said they did not read or subscribe to local media in Kentucky.

One woman told me her teenage daughter was suicidal ever since she’d stopped going to school.

“At any point, our schools could be victims to a mass school shooting. Any day someone could walk in and kill our kids and our teachers,” she said. “But we keep going to school because the benefits outweigh the risks.”

For his part, the governor remains focused on fighting the spread of the virus.

“We just can’t ignore it. We can’t pretend like it’s not here,” said Beshear in his latest statement. “We can’t allow the fact that we are inconvenienced make us pretend that the virus isn’t with us and isn’t deadly.”

“We keep reiterating that we have to do better and we have to wear masks and we keep seeing high numbers that highlight how important that is,” said Beshear.

Alex Acquisto covers public health and social services for the Lexington Herald-Leader. This dispatch is part of a series called “On the Ground” with Report for America, an initiative of The GroundTruth Project. Follow her on Twitter: @AcquistoA.