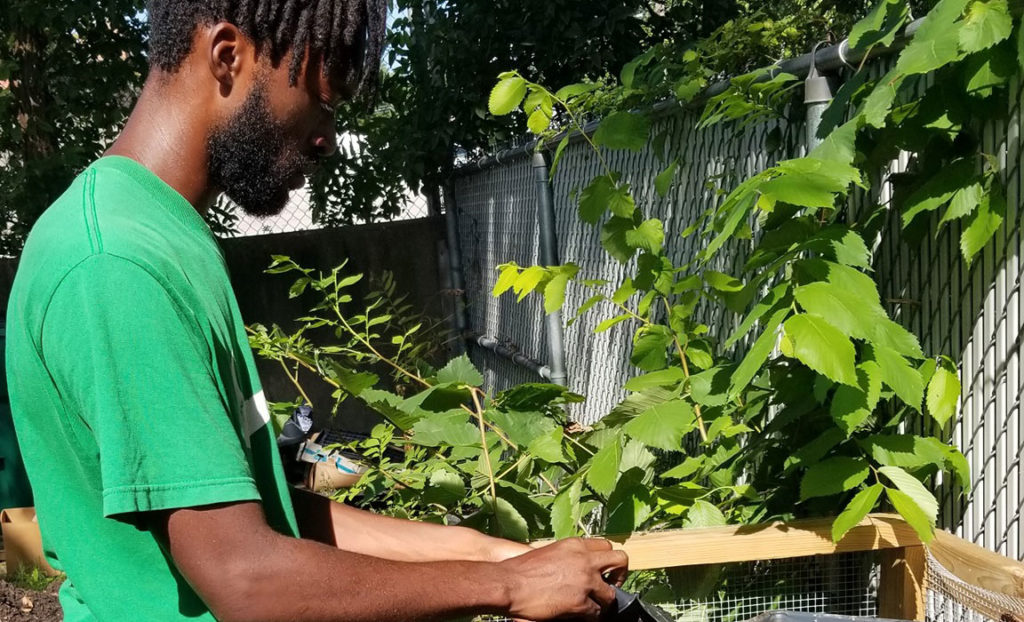 ST. LOUIS – When Erica Williams’ Wellston-based nonprofit A Red Circle was awarded up to $18,676 in a new state Agriculture Department program designed to address food access in low-income urban communities, it could have been a Godsend.

The program, Food Insecure Urban Agriculture Grants, launched in the state’s 2020 fiscal year, ended June 30, 2020, and is the only Agriculture Department program Williams and a department official know of aimed specifically at urban food access.

However, the program’s red tape can bind up cash-strapped urban farmers. The grants, for example, do not offer upfront cash, and they instead reimburse participants for funds spent on food access efforts. So Williams’ still-new organization could use only $9,000 of the initial award after the COVID-19 pandemic sliced her fundraising opportunities.

Many Black urban farmers “don’t have a lot of cash flow,” said Williams, whose organization has received a second grant and has been approved for a third. “If you’re going to award something like $25,000, if you want to do the reimbursement, I would say [require] maybe half [up front]. But to have the whole thing come upfront and then [pay] reimbursement is still a little bit inequitable because we know it’s no secret that Black-led organizations farms, nonprofits, businesses, are less funded than white-led organizations.”

Williams was among the St. Louis area food activists and government officials asked about the response by local, state and federal agencies to the need for healthy food locally. While activists lauded assistance from a helpful alderman here or a beneficial program there, each said locally, in Jeff City and in Washington, D.C., much more needs to be done.

“Every branch of government has room where we all can improve, from the federal, to the state to the local,” said Missouri Rep. Kimberly-Ann Collins, a Democrat whose 77th district includes neighborhoods classified by the USDA as low income and low access. “Have we done everything that we can to address food insecurity? No. Absolutely not.”

Most activists lauded the federal government for pouring billions of dollars into pandemic relief – some of which is being used to address hunger. This year, the Biden administration approved the biggest bump to food assistance benefits in the history of the SNAP program, and benefits will rise by 25% on average.

At the state level, Williams said she considers the agricultural department’s urban aid program “a good start,” despite its drawbacks. In the program’s first year, which coincided with the start of the COVID-19 pandemic, three local organizations were awarded up to $45,377, including the $18,676.90 originally earmarked for Williams’ organization. In the second year, which ended in June, four organizations in St. Louis and the county were awarded up to $77,675. In the current fiscal year, five local organizations could be reimbursed up to nearly $200,000 out of up to $400,000 available statewide.

“It’s an important issue,” said Christi Miller, communications director for the state agriculture Department, who said she knows of no other department program focused on urban hunger.  “And this was a great way for us to help with addressing food insecurity across Missouri. …There are some folks doing some amazing things with urban agriculture and addressing food insecurity. These grants have certainly shown what can be done.”

A Red Circle has used the money to build out its urban farming program, including the Healthy Flavor Community Market & Garden in Riverview. The organization also has received more than $70,000 through the CARES Act and got pandemic-inspired funding through the Small Business Administration. Williams plans to seek backing from St. Louis Councilwoman Sholanda Webb for A Red Circle’s goal of securing $300,000 in American Rescue Plan funding to open a community-owned grocery store in North St. Louis County.

The lack of traditional grocers in low-income communities is often cited as the cause of “food deserts.” More recently, food justice activists have spoken about “food apartheid” and pushed for a broader look both at the systemic racism facing residents in areas of low access and on solutions that go beyond just trying to woo major grocery chains.

Collins, the state representative, introduced a measure in March that would have authorized a tax credit for re-establishing grocery stores in low-access areas. The bill also contained a provision to establish a tax credit for using vacant lots for community gardens and or farmers markets, she said.

After getting pushback from some legislators on potentially offering credits to major food corporations, Collins amended the plan to focus on the lots – noting the bumper crop of lots in her district. Collins said the vacant lots portion of the measure passed out of the House with bipartisan support but stalled in the Senate amid a broader legislative logjam. Collins said she plans to take that angle up again. “It’ll support a lot of different projects that people are doing, especially in North City, St. Louis,” she said, noting the St. Louis public school district has “a strong base when it comes to community gardens.”

Jamie Edwards would like to see more assistance given to would-be urban gardeners. Edwards said her City Blossoms nonprofit has faced land purchase restrictions and police warnings as she tries to coax herbs and collards from raised beds on a vacant lot on Shulte, one of at least four vacant lots on the block.

Edwards said she was blocked from buying the land because she does not live within the city. So a neighbor stepped in, purchased the lot and plans to hand over the deed, Edwards said. About 200 lots are part of the city’s garden lease program, according to Laura Costello, director of real estate for the St. Louis Development Corporation, which runs the Land Reutilization Authority. That’s out of more than 5,900 vacant lots owned by the LRA citywide.

Edwards and some local food activists would like to see the city make it easier for urban gardeners to buy their land, rather than continue to lease. The lease costs $1 a year for up to five years, but activist Tosha Phonix noted some gardeners fear the property will be sold after they’ve invested years of work. Costello said the city avoids selling to out-of-towners to guard against land speculation.

Reducing the prevalence of food deserts was part of Mayor Tishaura Jones’ campaign platform. To help meet that goal, the city is seeking proposals for a “community-driven food production, processing and distribution” operation, funded with $1 million from the American Rescue Plan, said Nick Dunne, a spokesman for Jones. And under the Community Development Administration, there’s an additional $1 million for food assistance, he said.

The city also reduced the permit fee to serve hot food and increased the number of allowable chickens in urban areas, according to Craig Schmid, a government services analyst at the St. Louis Department of Health.  St. Louis County partnered with the city’s health department to provide greater access to the Link Market at North Central Community Health Center.

For Williams and other food activists, the incremental government steps mark a hopeful sign and come at a time when food activism and urban agriculture are growing. “I’m hopeful that, as we’re coming out of crisis mode … and good food organizers begin to get more into the community and talking with government officials and potential funders, that [politicians] will begin to do more,” Williams said. “You never know how the tide will turn.”

Karen Robinson-Jacobs is a Report for America corps member with The St. Louis American / Type Investigations in St Louis, Missouri, covering business. This story is part of ‘Barren Mile: COVID-19 and the fight against food apartheid,” the result of a Report for America initiative that brought Black-owned newsrooms from New York, Georgia, Missouri, and California together to look at how COVID-19 impacted food insecurity in their communities.