Giving thanks at the end of the road 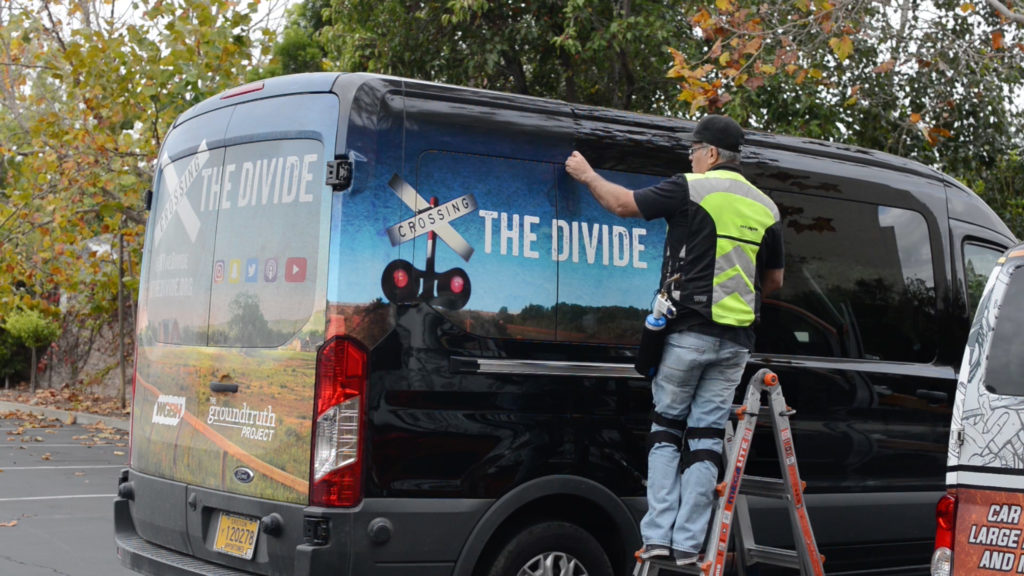 Click the play button on the image above to watch the video by Ben Brody.

SAN FRANCISCO — It was the end of the road.

After 72 days of reporting, 4,296 miles of highway covered and more than 200 pieces of editorial content — including written reports, video segments, photo essays, daily podcasts and social media postings — our “Crossing the Divide” team had made it from coast to coast on an extraordinary journey that produced an extraordinary body of work.

On this Thanksgiving, I am truly thankful for all the great effort that went into this project by the five reporting fellows and the two field producers who joined them. I’m also appreciative for the team effort by editors and producers from GroundTruth and our partners at WGBH in Boston, and our academic and local news partners along the way. Last week, I came out to the West Coast with other team leaders to wrap up the project and to help tie up loose ends before we could all head back to our respective homes and go into the Thanksgiving holiday.

One of the chores we had to tend to was returning a 15-passenger van that had carried the team members across the country back to the rental company. Before we turned it in, we hired an auto body expert with a blowtorch and a razor to carefully peel away the “Crossing the Divide” logo wrap on the van. It turned out that Juan Carlos, who did the work from Point of View Graphics, was an immigrant from Venezuela with a very interesting backstory. He offered a resonant Thanksgiving message that seemed to be the perfect way to reflect on the trip.

I watched the whole process as Juan Carlos, or “JC,” as he prefers to be called, ripped and peeled the vinyl wrap logo, which had become the rolling symbol of the project all across the country. The bucolic image of the farmland and the winding road came down noisily, the words “crossing” and “divide” torn off and rolled up into one big ball of trash and discarded on the asphalt.

The delicate part of the process, as I learned, was to get the vinyl coating off without damaging the base paint underneath. JC did so with precision. It struck me as a pretty powerful and somehow melancholy metaphor for the end of this long and challenging journey. The ripping and peeling sounds seemed to express how we as the “Crossing the Divide” team — reporters and editors alike — are left now to strip away the layers of the journey, to get to the base of an intense experience and reflect on what we all learned and what stories we offered for those of you who followed along the way.

At every turn in the road, this team explored issues that are dividing us as a country and tried to tell stories that might unite us. It was back in August when they first set out from our offices in Boston. They found their first stories about a divided America through inequities in education in a high school in Springfield, Massachusetts, where despite a system that seemed to be failing them there were still heroic students who persevered nevertheless. And they found insightful voices from people in rural Appalachia who want to be heard, and feel they aren’t being heard, particularly by the media, which they feel is too quick to stereotype places like the coalfields of rural, eastern Kentucky.

They explored the community of immigrants from Somalia in Minnesota and learned the importance of storytelling to Somalis, who like so many other American immigrant groups have struggled across generations to hold on to their culture and their identity. In Montana, they reported on the wildfires that have been burning there and how the fires can divide – and sometimes unite – people from left and right political perspectives to address the environmental damage they cause.

They also learned that both sides of the political divide have much to learn from Native Americans, whose ancient wisdom on wildfires has gone unheard for far too long. And in San Francisco, they told the story of a historic, African-American Baptist church in the Fillmore District that has struggled to keep a living community of faith amid the ravages of decades of gentrification and the rising pressures on the city’s minority communities that have come with an age of economic inequality.

At the end of the journey, I took some time to talk with JC about all this great work as he was focusing on his job. He genuinely wanted to hear the details of what we found in the reporting, and he asked great questions. But I wanted to hear his story.

And I learned that he came to America 17 years ago from Venezuela with $400 in his pocket as a single father with two children. I listened to the story of how he built his own small company wrapping and removing vinyl logos for vehicles, and how proud he is to have several employees. Last year he became an American citizen, he said.

Right away, he wanted me to know about the vast resources of his native Venezuela and how he witnessed first hand the terrible tyranny of 13 years of autocratic power under Hugo Chavez and how it destroyed the country. Indeed, JC watched as Chavez’s populism created and then exploited divisions, pulling apart the people and their nation. He urged me to beware these attempts to divide us here in America, and warned it will invade personal and professional relationships and families and eventually whole communities and then, if we are not careful, our nation.

“Venezuela is a beautiful country, very rich country, that now is crossing through a very dark moment with populism,” he said. “It changed the dynamic and feelings of many people there. When I see that, I am so scared these kind of scenes could be happening in this country. And I believe the people are trying to separate us because they want win, they want to get power. And we cannot let these people do that.”

He was so animated and convincing that I ended up recording audio and, along with our field editor and photographer Ben Brody, some video of his stark musings, a kind of final interview for the trip and some last words of wisdom from the road about America and about the time we live in.

“The country is so amazing and [the way] many cultures and people and races, they can survive and live together and work together,” he said, looking out over his glasses and pausing for a moment from his work to make the point.

Then just after he packed up his toolbox and we prepared to turn in the van at the end of the long trip, JC offered some parting thoughts.

“I feel so grateful, you know, in my heart, that this is my country now. And whatever I can contribute to make this country better, I will do my best,” he said. “God bless America and you guys …. Happy Thanksgiving for you.”