Getting out the Latino vote in rural California 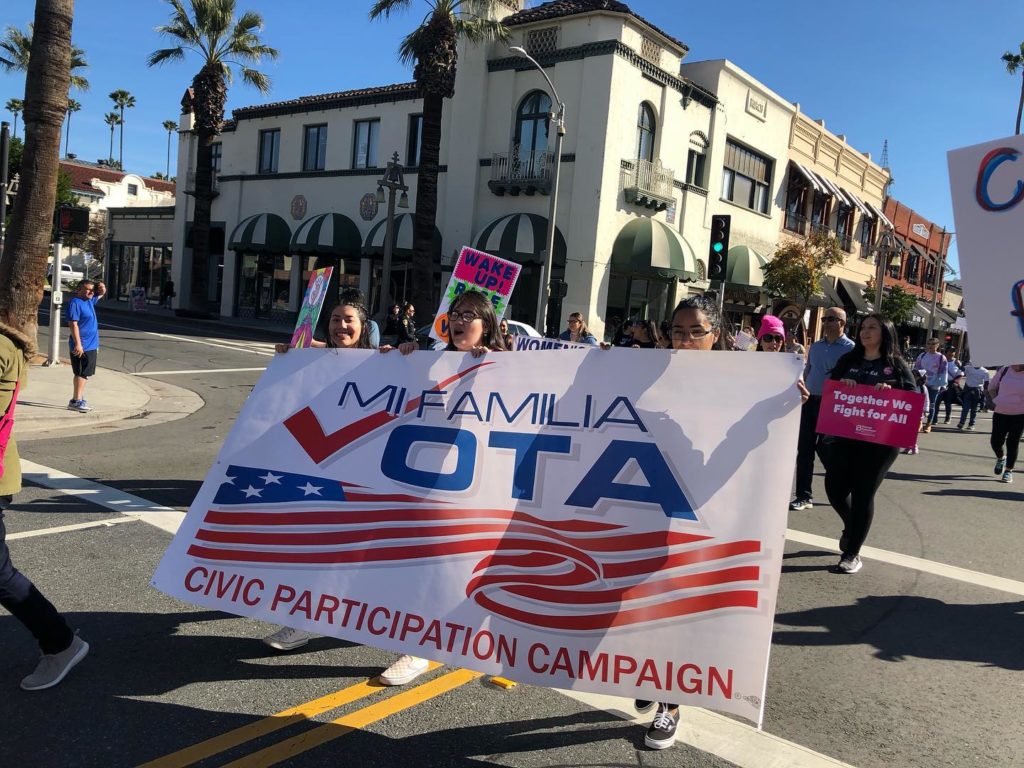 This dispatch is part of a series in collaboration with PBS American Experience that explores the expansion of voting rights in communities across the U.S., in connection with  The Vote, by American Experience, and as part of GroundTruth’s initiative called “On the Ground” with Report for America.

NORTH SHORE, Calif. — Patricia Leal-Gutierrez remembers the mornings that started at 4 a.m., the days spent working in triple-digit heat. She remembers the tired nights, the weight of exhaustion that comes after hours of manual labor.

Starting at age 14, Leal-Gutierrez cut and pruned grapes in fields near the unincorporated community of North Shore during summer breaks from school, sweating alongside her parents who immigrated to the area from Mexico in the 1980s.

North Shore is part of a string of rural, predominantly Latino communities that make up Southern California’s eastern Coachella Valley, and are fueled, in part, by the agricultural industry. The area produces nearly a billion dollars’ worth of agricultural products every year and provides jobs to about 12,000 people.

What Leal-Gutierrez, who was born in the eastern Coachella Valley, doesn’t remember about her early teenage years are conversations about voting or local elections. Latinos make up nearly 40% of California’s population, but at about 22% of the state’s actual voters, they are significantly underrepresented.

“It wasn’t because my family didn’t want to vote, or I didn’t want to vote,”  Leal-Gutierrez said on a recent August afternoon, sitting at a picnic table in North Shore not far from where she grew up. “But it was a systemic issue that comes with a long history of excluding people of color from voting.”

Obstacles to the vote abounded for the far-flung, largely Latino area, she said, including access to basic voter information and long drives to polling places.

Up until the last few decades, “you had to go out of your way to learn about your right to vote if you were a farmworker or Spanish speaker anywhere in rural California,” said Matt Barreto, a professor at UCLA and co-founder of the polling firm Latino Decisions. “No one was affirmatively trying to incorporate you.”

It wasn’t until the 1975 amendment to the Voting Rights Act of 1965 — more than 50 years after the 19th Amendment was ratified — that voters in communities like the one where Leal-Gutierrez grew up had legally-guaranteed access to voting materials in Spanish. Even that is recent history, Barreto said.

Newly armed with a master’s degree, Leal-Gutierrez said she felt a responsibility to return to the eastern Coachella Valley and advocate for the people she grew up with. The 26-year-old now works for a local non-profit called Alianza Coachella Valley.

Encouraging more Latinos in the area to vote and expanding access to the electoral process is a key part of the mission for organizations like Alianza and others. Local civic engagement groups help to register Latino voters, work to boost turnout numbers, and even assist eligible Latino immigrants in applying for citizenship and then registering to vote.

There are about 2.1 million Latinos in California who are eligible but not registered to vote, according to a 2018 report from Mi Familia Vota, a nonprofit working to increase voter turnout and registration among Latinos. And another 1.4 million Latino legal permanent residents (a designation that does not include voting rights) in California are eligible to apply to become citizens.

The work to raise participation among Latino voters also has a direct impact on farming communities like the eastern Coachella Valley.

The story of Latinos facing obstacles as they seek to exercise their right to vote is many decades old.

In agricultural communities like the eastern Coachella Valley, farm owners had outsized influence over Latino workers’ quality of life and labor rights throughout the 20th century. As more farmworkers were naturalized and became U.S. citizens, and had children and spouses who were eligible voters, voter intimidation efforts kicked into gear later in the century.

“When they start to become a threat at the ballot box, that’s when you start to see more laws get put in place, more procedures, more misinformation,” said Barreto, the UCLA professor.

Both Barreto and Pedraza said there’s evidence of growers directly intimidating farmworkers against voting in California. Other efforts from growers and the agricultural industry undermined Latino voices more subtly, including attempts to redefine what documents were necessary for voter registration, like proof of a valid mailing address, Pedraza said.

Migrant farmworkers who moved based on the season, or the many workers who lived in labor camps owned by growers, did not have fixed mailing addresses. San Joaquin County near San Francisco, for example, had several hundred labor camps by mid-century.

“[Growers] understood that if you want to prevent labor from organizing, one of the things you have to do is make sure that they can’t vote,” Pedraza added. “If they can’t vote, then their calls to action are more likely to fall on deaf ears of elected officials.”

Still, by the 1960s and 70s, farmworker organizing began to surge in California, particularly through the United Farm Workers (UFW) labor union, co-founded by civil rights activist César Chávez, Dolores Huerta and others. The city of Coachella, about 20 miles from North Shore, was the site of many farmworker marches and protests organized by Chávez himself.

Voter registration drives were an integral part of labor organizing for Chávez, who once famously said: “We don’t need perfect political systems; we need perfect participation.”

That tradition continues even today with UFW making it a core mission to get more eligible Latino residents to become citizens and register to vote. Voter registration drives continue to be a critical part of the union’s legacy. UFW also fine-tuned a very grassroots style of voter outreach, which has involved going directly into Latino neighborhoods across the state for hundreds of political campaigns.

In 1986, the Immigration Reform and Control Act created a pathway to citizenship, and voter eligibility, for the existing generation of farmworkers in California. The law allowed undocumented immigrants with farm experience to apply for legal status — about one million farmworkers, mostly from Mexico, applied in the state. Across the nation, roughly 2.7 million immigrants achieved legal status, and in 1996 about 250,000 of them became citizens.

Decades after UFW’s early voter registration drives, and key amendments to the Voting Rights Act, activists continue to work to raise turnout and registration among Latinos voters in Southern California.

The eastern Coachella Valley’s immigrant population, for one, is made up of both citizens and non-citizens, many of whom have lived in the area for decades as legal permanent residents. But because such non-citizen residents don’t have the right to vote, coupled with the remote location of the area, those communities have sometimes been overlooked all together by canvassers and candidates, Leal-Gutierrez said.

One organization now trying to fill that gap is Alianza. The group’s get-out-the-vote campaigns typically run on election years from March to November, and feature door-to-door canvassers who live in the area or close by. Those canvassers share election updates, details about polling places (or, in this year’s case, mail-in voting), upcoming candidate forums and more. Information is provided in both Spanish and English. Because of coronavirus, Alianza’s work this year, much like that of other groups, focuses heavily on phone banking.

In Riverside County, which includes the Coachella Valley and is home to 7% of Latinos in the state, Mi Familia Vota does similar work year-round. The national organization was co-founded by former UFW vice president Eliseo Medina, who worked alongside Chávez. In addition to basic voter outreach, Mi Familia also helps Latinos who are legal permanent residents apply for citizenship.

“Those that come in to do citizenship applications tend to be the older generation of Latinos that have been in the U.S. for so many years, but for some reason are not aware of the resources available to them,” said Janet Bernabe, Mi Familia Vota’s Riverside coordinator. “And that’s where we step in.”

As of last year, Mi Familia Vota had registered more than 50,000 new voters in the state since 2012, Bernabe said. Latino voter turnout in Riverside County as a whole has also spiked. Voting among Latinos in the region overall more than doubled between 2014 and 2018, a report last year from UC Riverside’s Center for Social Innovation showed, and voter registration grew by 36% between 2012 and 2018.

The Latino vote has also helped elect lawmakers like Rep. Raul Ruiz, who represents California’s 36th congressional district, which includes the Coachella Valley, where Ruiz grew up as the son of farmworkers.

In North Shore, enfranchisement has come full circle for Leal-Gutierrez. When she was younger, voting and elections didn’t always make it into dinner table conversations in her family. But that’s changing.

“It means talking about how the system works, who’s running for what position, why this is important,” she said. “These are conversations that I’m now having with my siblings.”

Amanda Ulrich is a Report for America corps member, covering Native American and Latino issues in Riverside and San Bernardino for The Desert Sun in Palm Springs, California. This dispatch is part of a series called “On the Ground,” supported by The GroundTruth Project. Follow her on Twitter: @AmandaCUlrich

Listen to “On the Ground with Report for America,” an all-new season of the GroundTruth Podcast