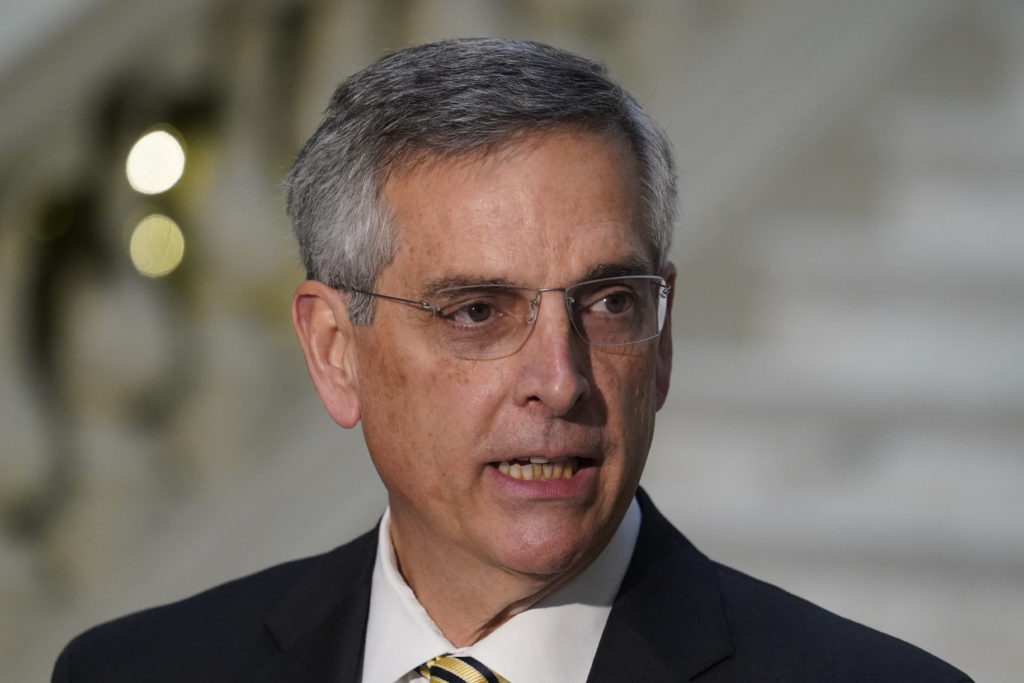 ATLANTA — Georgia’s Secretary of State Brad Raffensperger took a call from President Donald Trump on Saturday unlike any in known American history. And he was recording.

Through the disjointed, hour-long call, a transcript of which was published by the Washington Post on Sunday afternoon, Trump talked through a list of debunked and unsubstantiated election fraud grievances and pressured and at times threatened Raffensperger, a fellow Republican, to “find 11,780 more votes” — one more than President-elect Joe Biden’s victory in the state.

Trump insisted — despite all evidence to the contrary — that he had actually won Georgia by hundreds of thousands of votes and accused Raffensperger of a potentially criminal offense for failing to report that. Raffensperger pushed back, curtly: “Well, Mr. President, the challenge that you have is, the data you have is wrong.”

Raffensperger — who was endorsed by Trump in his 2018 Secretary of State campaign — has endured a two-month long barrage of attacks from Trump’s camp, as the outgoing president relentlessly strives to overturn his presidential election loss.

But through two audits and a recount, Raffensperger has staunchly defended the result. He did it again on his call with Trump on Saturday, flatly rejecting Trump’s claims of fraud before finally ending the call: “Thank you, Mr. President, for your time.”

The president’s pressure campaign, which some political analysts and legal scholars have suggested is not only an unprecedented assault by a sitting president on the American democracy but potentially a criminal violation akin to extortion, is far from his first. It follows 60 lost court cases, according to Marc Elias, the Democrats’ lead election attorney, and at least three similar appeals to Republican state lawmakers, including a group of Michigan legislators, the speaker of Pennsylvania’s House of Representatives, and Raffensperger’s boss, Georgia governor Brian Kemp. So far, all of those attempts have been rejected.

But if Raffensperger is an old school, pre-Trumpian Republican defending the rule of law, he’s also defending an old school Republican approach to voting policy that prioritizes ballot security over access and shifts some responsibility for voting from the state to the voter. That approach, incidentally or intentionally, has been shown time and again to disenfranchise Black voters, Native American voters and other voters of color at disproportionate rates.

“There are things that are happening that are technically legal, but we know from history that things seem racially neutral and technically neutral on the face,” explains Anoa Changa, Georgia based activist and journalist. “But when we look at the application it still disenfranchises and impacts people’s ability to have access to elections.”

Raffensperger has set his sights on voter fraud throughout his two-year tenure. In an interview with Georgia’s NPR affiliate he explained,  “[Voter fraud]  is something you always have to remain vigilant on, and never lower your vigilance. Because things do happen, and people can make honest mistakes, or people can make other mistakes, but we want to make sure that only Americans are voting.”

But this belief is where part of the issue lies. Raffensperger demonstrates the Republican legislative trend of creating election policy based on unsubstantiated voter fraud claims. Georgia already has robust systems in place to detect voting irregularities and deter voter fraud. The voting rolls are regularly purged. There are strict voter ID laws to ensure eligible Georgian’s have just one vote. And when rare instances of voting irregularities do occur, they are caught, meaning the systems set in place are working.

A 65-year-old husband and father of three, Raffensperger is what you think of when you think of a southern Republican. The small-businessman-turned-politician served six years as a city councilman and state legislator before being elected to replace current Georgia governor Brian Kemp as secretary of state in Georgia’s landmark 2018 election.

Kemp was the controversial, narrow winner of that gubernatorial contest against Stacey Abrams after he refused to recuse himself from the administration of his own election. His tenure as Secretary of State was fraught with voter suppression, including the closure of more than 200 polling places, exact match laws that disproportionately impacted voters of color, strict voter ID laws, and voting roll purges that ultimately proved riddled with inaccuracies.

Abrams went on to found Fair Fight Action, a voter advocacy organization that built on her decades-long work to reach, educate and mobilize voters. Along with other voting rights organizations, Fair Fight Action is partly responsible for mobilizing the largest turnout in Georgia’s election history and pushing back against Kemp and Raffensperger’s policies.

Raffensperger, an engineer by trade, also holds an MBA from Georgia State University, which he says guides him as a politician. He has owned several companies, including a childcare center, manufacturing companies, and a construction and engineering practice.

His political career began in 2012 as a city council member for Johns Creek, located just north of Atlanta. In 2015 he was elected State Representative for Georgia’s House District 50. A small-government conservative, he had a quiet turn in the state capitol, working on committees for utilities, insurance, intergovernmental coordination and juvenile justice, and only sponsoring  two regulatory insurance and tax bills..

He won a runoff election for Secretary of State with promises to replace income tax, strengthen voter ID, and update Georgia’s voting machines with paper ballots. His localized approach to government was front and center as he emphasized streamlining government operations.

“Our founders established the Constitution so that the states were tasked with the responsibility of elections,” Raffensperger explained in what would prove to be a prescient 2018 campaign interview. “in this day of constant hacking attempts and other bad actors, it is a benefit that America has a decentralized voting structure.”

Two years on, state and federal legislators say they are looking for ways to shore up public confidence in election results, after the most contentious, drawn-out election certification process in recent memory (former Vice President Al Gore conceded the chaotic 2000 election on Dec. 16 of that year). Raffensperger is already at work.

Since Nov. 3, Raffensperger has called for the end of no-excuse absentee balloting and for stricter voter ID requirements for absentee balloting, saying the steps would respectively help with vote processing and ballot security, but voting rights advocates say they could block eligible voters from the ballot box. And after November saw record voter turnout across Georgia, Raffensperger opened an investigation into a number of prominent voter mobilization groups.

For Georgia’s voting rights activists who have been working under ten years of Kemp and two years of Raffensperger, the moves were expected.

“We have seen this before from the Republican Party,” said Nsé Ufot, the CEO of the New Georgia Project, one of the groups under investigation. “[Raffensperger backed the election results], then turned around and attacked voting rights groups.”

For the state’s Republican party members, this plays into a legislative trend that has gone on for more than a decade. During almost every state legislative session new voting legislation is introduced and becomes law through Georgia’s Republican majority. Then just as it bolsters election accessibility and contributes to growing voter turnout, it falls out of favor with Republican lawmakers.

For example, in 2005, the now unpopular no-excuse absentee ballot legislation was introduced under a Republican-led state legislature. For years it was a preferred method of voting for more Republicans than Democrats. However, as mentioned, that is not the case now as party lines within the Republican party are re-drawn between those who blindly support Trump no matter the cost and those who do not.

“The idea that people would take away no-excuse absentee balloting after a pandemic is cause for concern,” says Dr. Andra Gillespie, Emory University Professor and Political Analyst. “ And it should be just as concerning as 70 years ago asking people to try and pass ridiculous literacy tests.”

Dr. Gillespie makes the argument that when Raffensperger does these types of things that can make voting more difficult, like calling for an end to no-excuse absentee balloting, he is looking for a problem to fit the solution he has already created. In other words, Raffensperger is still demonstrating his allegiance to the Republican party.

When Raffensperger took office in early 2019, he continued overhauling Georgia’s election systems. One of the many concerns, on both sides of the aisle, following the 2018 election was the status of the state’s outdated and insecure election system.

One of Raffensperger’s first tasks as secretary of state was to select a new voting system. Eventually, he and his office settled on an election system by Dominion Voting. Though the decision was originally criticized by state Democrats and voter advocacy groups who wanted verifiable, hand-marked paper ballots, Trump supporters have accused the company of manipulating presidential election tallies, without any proof. Raffensperger conducted a hand-counted audit of all five million votes in November; it found votes for both candidates with a slight shift towards Trump and no evidence of manipulated returns.

“We have seen this before, from these counties and from the Republican Party,” said Ufot.

As the 2020 presidential election loomed, Georgia’s elections were still plagued with voter disenfranchisement. During the state’s June 2020 primaries long lines and voting machine issues lay at the feet of Raffensperger. But his office passed the blame to county election officials, placing an especially damning charge upon election officials from the state’s largest and most diverse and politically changing metro counties including DeKalb and Fulton.

Both counties were subjected to investigations from the secretary of state’s office which furthered the office from responsibility. Following these election breakdowns and buck passing Raffensperger called for new legislation that would enable state election boards to intervene in these instances, a move that would be in step with party lines.

And the blame game continued into the general election just as Raffensperger sought to sow trust in election results, he continued to go after Fulton county election officials. “It’s somewhat typical for what we’re seeing from Fulton, both recently and really for the last 15 to 25 years,” Raffensperger said. “I think us in our office, and I think really the rest of the state, is getting a little tired of always having to wait on Fulton.”

On the Saturday call with Raffensperger, Trump called himself a “schmuck” for endorsing Kemp as governor, a barb that followed a public suggestion that Collins should run against Kemp in December.

The infighting would seem to threaten Republican coordination on any sort of state or national voting policy in the coming year, but Raffensperger and Kemp — the relative moderates to Trump’s unprecedented antics — are calling for reforms before the Senate runoff is even complete. Trump’s attacks on the election results might be new, but voter suppression is old as democracy.

And these efforts to restrict accessibility point to the complexity of Raffensperger.

“It’s important to know that voter suppression can shapeshift,” says Dr. Gillespie. “The issue with Brad Raffensperger is he stood up to Donald Trump and told him he lost the election and on the other hand he is still responding to the pressure to respond to allegations of voter fraud regardless of whether they have any grounds in fact or evidence.”