From the Pentagon Papers to Trump’s Ukraine phone call: a conversation with whistleblower Daniel Ellsberg 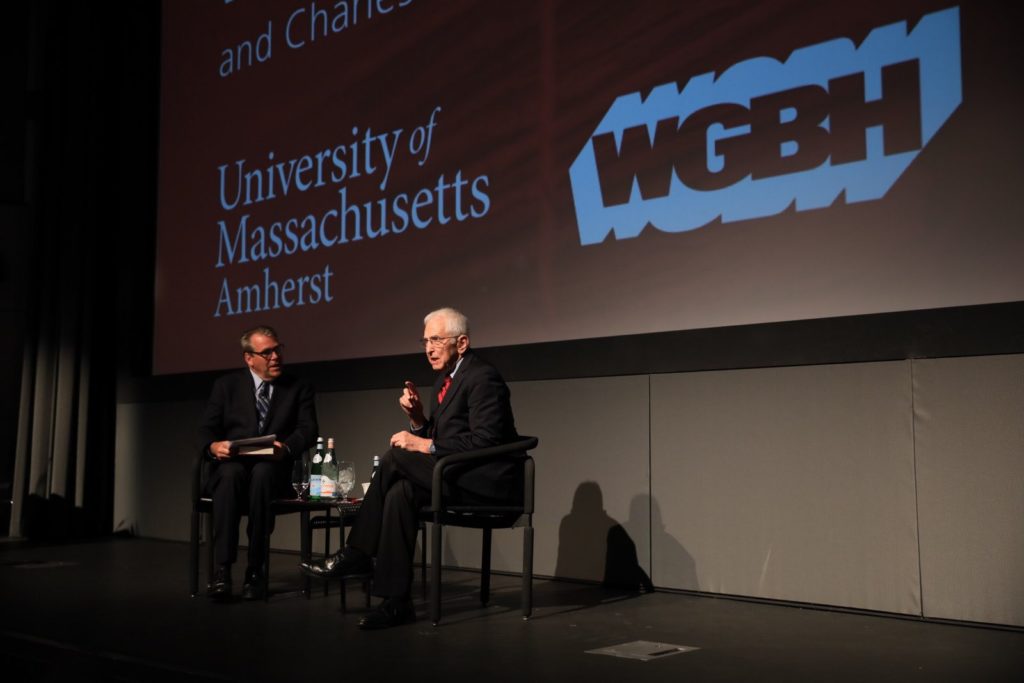 BOSTON – Daniel Ellsberg’s conscience and courage as the father of American whistleblowers still echoes across the generations, and his insights and his inspiration are invaluable for the moment of political crisis in which America finds itself today.

At age 88, his words ring strong and true and it was a tremendous honor and privilege to moderate a conversation with Ellsberg at WGBH’s Yawkey Auditorium in Boston on Wednesday, where he spoke about all that is unfolding in Washington with the impeachment hearings into the alleged abuses of power by President Trump.

“We have a president now, who took the oath to protect and defend the Constitution against all enemies, foreign and domestic,” said Ellsberg, a former high-level defense analyst and author. “I believe he’s a domestic enemy of the Constitution right now.”

With the University of Massachusetts, Amherst acquiring the archive of Ellsberg’s papers — some 500 cardboard boxes of journals, letters, legal documents, intelligence analysis from Vietnam to more recent insights into America’s nuclear program — the door is open for scholars, journalists and the public to explore the importance of his life and its resonance today.

The historic collection will be housed at the W.E.B. DuBois Library at the flagship campus of UMass. Even as we gathered in Boston at WGBH, more than 100 boxes from his trove were in a truck making their way from his California home barreling East to Amherst. They will be taken to the DuBois library where more than 100 other boxes have already arrived. And there are still many more in the basement of Ellsberg’s home in California that will need to make their way.

Since he revealed the Pentagon Papers in 1971, Ellsberg’s contribution to American democracy is legendary. With great moral courage, he brought to the publics attention how the war in Vietnam was strewn with “broken treaties, falsehoods, stupid, stupid judgments,” as he put it, which cost thousands of American lives––and would have cost untold thousands more had he not risked life in prison to reveal the document. The 7,000 pages of internal government documents he released to the press, known  as the Pentagon Papers, sparked a landmark court case with the Nixon administration and Nixon’s attempts to silence him were central to the Watergate impeachment hearings which ultimately led to Nixon’s resignation in 1974.

“I’ve been saying for many years to others, ‘Don’t do what I did – don’t wait till the bombs are falling and another war is started in Iran or elsewhere,’” Ellsberg warned. “If you have documents that can reveal this lying or wrongdoing, consider at whatever cost to yourself… consider putting them out in a timely way that could make a difference, a war’s worth of lives could be at stake,” Ellsberg said.

Nearly a half century after Ellsberg’s courage changed the course of history, whistleblowers have more recently played an important role in American democracy. There was Katherine Gun and Chelsea Manning during the Iraq War, Edward Snowden during the height of NSA data gathering, and, now, the unidentified whistleblower who exposed Trump’s potentially impeachable actions in withholding $400 million in security aid package to Ukraine until an investigation was opened into Trump’s main political rival, former Vice President Joe Biden. The question of a quid pro quo for personal political gain is at the heart of the impeachment hearings into Trump’s presidency.

But as Daniel Ellsberg explained, whistleblowers are just one “link in a chain” of actions that expose government wrongdoing.

“There’s millions of people who marched against the war who contributed in this context,” he said. “But there were dozens to hundreds of people who each took an action that was necessary without which it wouldn’t have happened.”

I think it is no small link in that chain of actions to say that newspapers like The New York Times, The Washington Post, and The Boston Globe had great courage to publish the Pentagon Papers.

An example was long-time Boston Globe reporter Tom Oliphant, sitting just a few rows from the stage, where Ellsberg and I sat that night. Oliphant’s scoop on the secret government papers, Ellsberg said, inspired him and his wife, Patricia Marx-Ellsberg, to make copies of the papers, which, in turn, made it possible for the newspapers to keep the story going.

For me, that was a major takeaway from the conversation with Ellsberg: whistleblowing, as a safety valve for democracy, requires a strong and independent press to bring government wrongdoing to the public’s attention.

As Ellsberg recalled, he brought the papers first to a select group of progressive senators, but they sat on the information. Time and time again, he found Democrats including Edward Kennedy, George McGovern and J. William Fulbright; and Republican Charles Mathias would promise to release the documents to the public, but instead waited for Ellsberg to do it himself.

“And ultimately… I came to a point that Chelsea Manning and Ed Snowden…came to express 30 years later, in almost the same words that came to me: ‘This information should be out. No one else is going to do it. So I’ll do it,’” Ellsberg recalled. He went to the newspapers with the story and changed the course of American history.

And our nation is better for it, and owes Daniel Ellsberg an enormous debt of gratitude.

In his remarks at WGBH, UMass Amherst Chancellor Kumble Subbaswamy captured this spirit of gratitude and under-scored the importance of the newly acquired collection of Daniel Ellsberg’s papers, particularly at this moment in our nation’s history:

“Given the university’s fundamental mission as a stronghold for freedom of expression, and our longstanding commitment to social justice and accessibility, we are honored to receive his papers,” said Subbaswamy.

“As guardians of this exceptional collection, we are committed to making the work of Daniel Ellsberg life broadly accessible, ensuring it remains in the public sphere, informing our discourse for years to come.”