Historic French election may come down to the youth vote 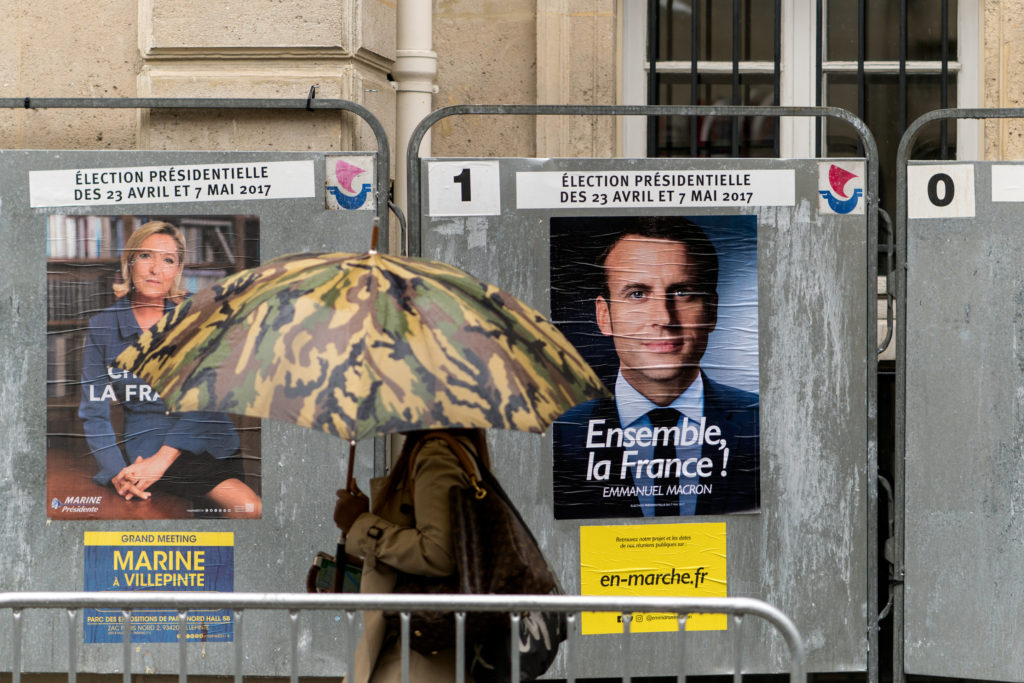 Election posters depicting Marine Le Pen and Emmanuel Macron ahead of the French presidential election in Paris in May 2017. (Lorie Shaull/Creative Commons)

“For me, it’s the war against Islam, terrorism … and the exit from the European Union,” said Renaux, an 18-year-old from the northeastern town of Beuvry. Le Pen, he said, is “the only one” in the race who understands those issues. And it is Le Pen’s appeal to young voters like Renaux that just might win her the presidency.

On Sunday, Le Pen and Macron will face off in the most consequential French election in a generation.

The candidates represent vastly different visions for the future of France, whether it’s on immigration issues, responses to terrorism, the future of the European Union or the country’s stance toward Russian aggression. A victory for Le Pen would likely mean the end of Europe as we know it: she has called for a referendum on France’s exit from the EU and the Euro, is cozy with Russian President Vladimir Putin and bills herself much in the same mold as US President Donald Trump.

Macron has called for a more welcoming and diverse France. Le Pen opposes any further immigration into the country and has taken a hard line against Muslims.

While polling shows Macron with a consistent double-digit lead over Le Pen, concerns over voter turnout mean the election night result could be closer than the polls suggest. The Macron campaign reported a “massive” hacking attack Friday as private emails leaked into the public. And until the results are in Sunday night, all of France — and much of the world — will be anxiously awaiting the verdict.

An overwhelming anti-establishment sentiment has reshaped French politics and upended traditional notions of which voters support which parties here. This election is the first time in the history of the French Fifth Republic where the two traditional parties, the Socialists and the Republicans, have been shut out of the second round entirely. Depending on how Le Pen and Macron fare, both on Sunday and in the June legislative elections, these changes could endure in future elections as well—and speak to the kinds of demographic shifts populist movements are causing across Europe.

Le Pen took over leadership of her party in 2011 and has managed to take the National Front from living mainly on the fringes of French politics to one that many voters consider an acceptable mainstream option. Her efforts to “de-demonize” the party — which included tossing her father, Jean-Marie Le Pen, out over anti-Semitic remarks, as well as shifting its rhetoric toward immigration and security issues—have helped bring in a whole new host of voters.

For many new National Front supporters, this new focus is what brought them to the party, regardless of who they voted for in the past (or whether they were even involved in politics at all).

“For me, Marine Le Pen represents protection and security,” said Marie Eschrich, 69, of Arles, who began supporting the National Front two years ago. “Because we have too much danger in France.”

Raymond Fontaine, a resident of Hénin-Beaumont, said he had previously not been involved in politics—but that Steeve Briois, the town’s National Front mayor and a top leader in the party, brought him on board with what he’s done for the town. Fontaine said he wants to see local jobs going to French citizens, not to recent immigrants.

“It was our mayor of Hénin-Beaumont,” said Fontaine, 44, when asked why he chose to support Le Pen and her National Front. “Because he’s done good things, he’s done new things … jobs, for French people, not for foreigners.”

Fabrice Degalez, a 40-year-old policeman from the same town, said that as a member of law enforcement security is one of his top issues, but also named Le Pen’s proposed exit from the EU as a major reason for his support.

“Cooperation with Europe? Yes,” Degalez said. “Europe as it exists today? No.”

The National Front, founded by Le Pen’s father Jean-Marie in the 1970s, initially had support that was concentrated along the Mediterranean Coast in the south of France, but made few inroads elsewhere in the country. And since many of its voters had been with the party since its early days, the National Front electorate tended to be older.

This year, things have changed: Le Pen has made an effort to bring in working-class voters from industrial parts of France, particularly in the north and northeast. Many come from traditionally Socialist towns and cities, but are turning to the National Front amid economic distress and concerns over immigration.

“When Jean-Marie Le Pen was president of the party, it was very squarely based in the southeast—so, Provence and the French Riviera,” said Dorit Geva, an expert on gender and the National Front at Central European University. “When Marine Le Pen entered the picture, they really strategically moved toward capturing the working class, so that’s when the geographic spread really changed … Marine Le Pen made a move to be in the industrialized northwest, like the ‘Rust Belt’ of France.”

Le Pen’s decision to hold her first-round election party in Hénin-Beaumont was symbolic of those inroads into industrial France: Briois, its mayor, is the current interim president of the party while Le Pen runs her campaign. Briois was elected here in 2014, the year the National Front saw its first round of electoral victories (both at the municipal level and in the European Parliament) under Marine Le Pen.

Young people, too, can no longer be counted on by the two traditional parties — or even necessarily by Macron, who exit polls showed receiving less support from 18- to 24-year-olds than either Le Pen or far-left candidate Jean-Luc Mélenchon on April 23. Le Pen’s National Front has a strong and devoted following among young voters, many of whom are involved in the party’s youth wing.

What Le Pen has done is to truly bring her young supporters into the fold of the party: many of them have run as candidates on local lists beginning in the 2014 elections, making it clear to young voters that the National Front wants young people to be involved and gives them responsibility. The prime example of that is her niece, Marion Maréchal-Le Pen.

Maréchal-Le Pen, a top figure in the party and a valuable surrogate for her aunt in southern France, was elected to parliament in 2012 when she was only 22 years old.

Running young people as candidates “enabled them to say very early on, ‘We really are the party of the young and we put our faith in the future,’” Geva said. “So the young are made to feel very valued.”

In a similar way, Macron — who, until just over a year ago, had no party at all — has managed to bring in supporters from a range of different parties, especially now that he’s the final choice against Le Pen. Macron benefited from several political forces at work this year: he was able to both pick up support from Socialists unhappy with their candidate, Benoît Hamon, while also appealing to Republicans who were turned off by the scandals of their candidate, François Fillon.

And when it comes to En Marche’s candidates in June’s legislative elections, Macron signaled early on that he intended to fill the 577 candidate slots with more than just political insiders, another message key to its goal of involving new supporters. On his initial list of 14 candidates, released in early April, were a 33-year-old Parisian who works at a startup, a farmer from France’s Creuse region and a 31-year-old criminal lawyer in Nice.

At a local meeting of Macron supporters shortly before the first round election, 18 Parisians sat around small tables in a Montmartre café. Going around and discussing their reasons for joining Macron’s En Marche, most said they had come from supporting another more traditional political party: some were former Socialists, while others had been Republicans.

“It was a long time that I’ve been interested in politics,” said Justine Henry, 28, who now serves as a local volunteer coordinator (or référente) for Paris’s 18th Arrondissement. “But I was not engaged.”