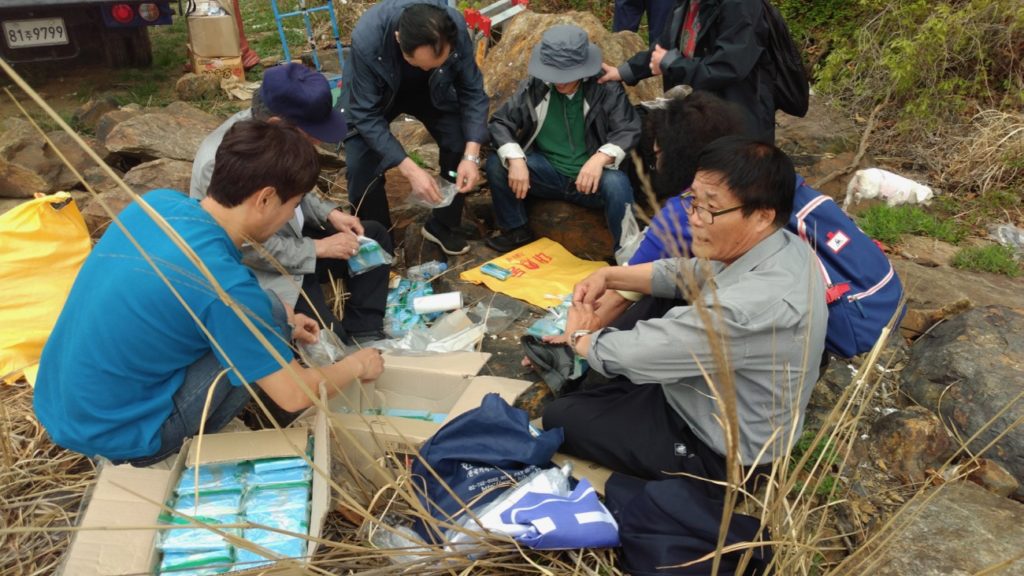 For her latest story, where she followed a North Korean defector, reporter Kelly Kasulis employed an interpreter (Photo by Kelly Kasulis/GroundTruth)

Kelly Kasulis is an independent foreign correspondent reporting in South Korea and a former digital editor at The GroundTruth Project. Check out her work in our latest podcast episode “Hope (and contraband) in a bottle,” where she follows a North Korean defector trying to smuggle bottles with rice and media-filled USBs into his former country.

In today’s Navigator, Kelly gives tips on how to approach man-on-the-street interviews in cultures that are not your own.

I was utterly lost when I started reporting on the Korean peninsula last July. For my first assignment, I was sent out on the street to get 10 photo portraits of everyday people and ask them what they thought about President Trump. At the time, I thought that would be incredibly easy — I had done dozens of man-on-the-street interviews in the United States, and I’m Korean American. I figured I had everything I needed.

That day, I got only five photos. I remember standing outside in the sweltering heat, absolutely baffled that so many people declined to answer my questions. I was also confused as to why every single person I did interview refused to write their name on my notepad (Korean is a hard language to spell out verbally).

Finally, one of them let me know: My pen had red ink, and names written in the color of blood are a bad omen — a sign of death. It was one of the many things I learned about doing man-on-the-street interviews in South Korea.

It might sound obvious, but successfully navigating different cultures and interview customs comes with a learning curve. Reporting trips to India and Japan have driven that lesson home. So, here are three tips on how to get acquainted with a country’s street interview customs — and fast.

1.) Find local reporters and ask around about interview customs.

When I first landed in Seoul, I learned a lot by connecting with local journalists through friends and by contacting the Asian American Journalist Association. Even though it’s a U.S.-based organization, it has an extensive network of reporters in Asia — and other professional groups might, too. If that doesn’t work, see if there’s a foreign correspondents’ club or even a Facebook group for reporters in the country where you are reporting. You’ll be surprised by how forthcoming people are with their tips and tricks.

Case in point: A fellow journalist in South Korea gave me a tip that got me dozens of interviews. For reporting on a business or official organization, she recommended showing up with a written letter that includes a brief paragraph about my story, who I am, the organization I’m working for and contact information for myself and my editor. In South Korea, a written note is a source of comfort — it’s something a cashier at a coffee shop can pass to their boss later, for example, and it gives a sense of transparency. Things like these are impossible to anticipate, which is why connecting with other journalists is key.

2). Whether you have language skills or not, figure out how to best use an interpreter.

I don’t speak Korean perfectly. So, if I need to get quotes on the street, I have two options — hire an interpreter, or conduct the interviews myself and get the audio translated later for clarity. It’s a little counter-intuitive, but I’ve found that doing the interviews alone gets better results.

One would think that having “a local” at your side would soothe any concerns and make interviewees feel more at ease. But I’ve found that many people in South Korea have very little trust in their own media and would be more comfortable talking about sensitive subjects in foreign news organizations, where their words will be translated into English and published abroad. I’ve also noticed that some people give foreign media more consideration because they’re curious — or because they want their opinion to inform how South Korea is viewed on the world stage.

This dynamic is likely different in every country. When I was in Japan, working with a translator put most of my interview subjects at ease. In India, where many people speak English, I most effectively scored interviews by leveraging personal connections. If you feel confident about your language skills, try it out both ways and compare the results. Alternatively, ask foreign correspondents and local reporters about what works for them.

3.) Think about what would make you more trustworthy.

Imagine yourself before you ever came into contact with the journalism world. Now imagine a foreigner approaching you at that time and asking you whether or not you hate your president, or have a latent fear of war, or are struggling to find a job in this economy.

You might be suspicious. And in South Korea, that’s definitely the case — especially in a country where press safety and freedom of speech in the media are fairly recent (and, by some measures, still far from ideal).

Understanding the context of the place and people you are going to interview will make you more approachable. Know your history when you report in a new country. Were people ever killed for their political opinions in the last 50 years? How long has this nation been in contact with tourists from your country? Do they have reasons to fear backlash from going on the record?

I’ve tried many things to make myself more trustworthy: carrying translated business cards, using my phone to show my staff page on a news website, letting them know the interview will be translated, giving a spiel on who I am and why I report in South Korea. During the 2018 Pyeongchang Winter Olympics, I actually made a plastic press ID to show people when I approach them. The card is unofficial, but my face and the word ‘PRESS’ in big letters certainly helped.

All of these workarounds made my man-on-the-street interviews more smooth, especially when I combined them. They let potential sources know that I cared to put them at ease, and that communication with me is an open door.

In South Korea, like anywhere else in the world, trust is the cornerstone of a good interview. Knowing the best way to approach people on the street can start building that trust and generate not only good quotes, but potential leads for your current or future stories.