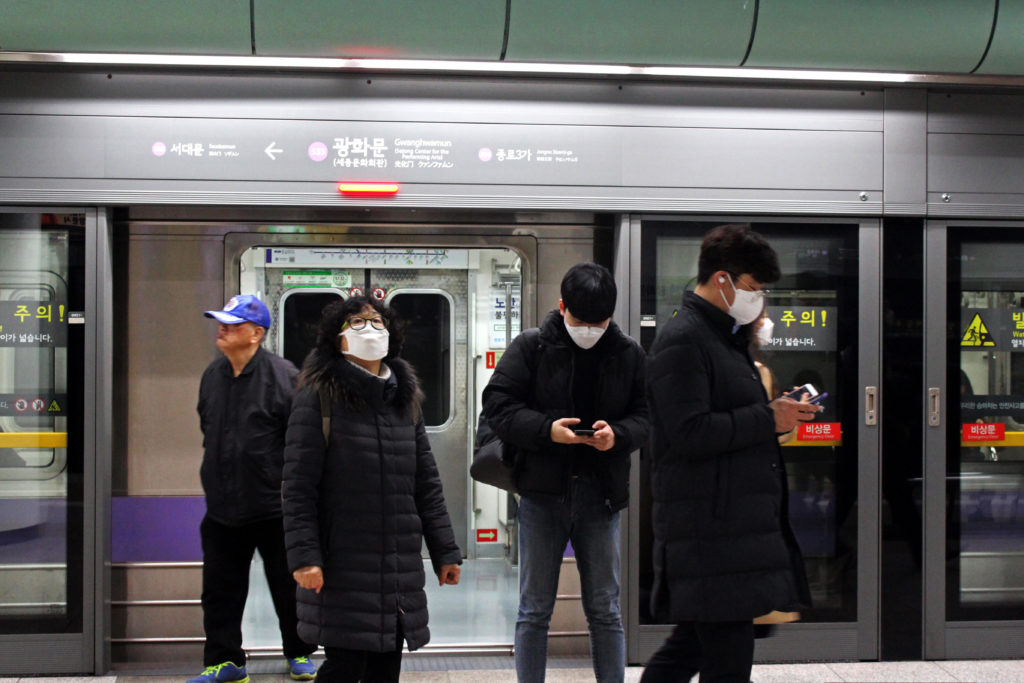 People wearing face masks to protect themselves from COVID-19 (exit the subway in Gwanghwamun Station / walk through the Gwanghwamun district) in Seoul, South Korea on Feb. 20, 2020. (Photo by Kelly Kasulis/GroundTruth)

SEOUL — Just a few weeks ago, South Korea and China were ground zero for coverage of the COVID-19 novel coronavirus. In mid-February, the Southeastern city of Daegu had the second-largest outbreak in the world, behind China — and many of us foreign correspondents here were covering the virus around the clock.

Now, life in Seoul is starting to look normal again: People seem to be walking the streets more, and my public bus to the Foreign Press Center is almost always full. Still, what we’re seeing seems more like “new normal” — almost everyone I’ve seen is still wearing a face mask, and I’ve seen restaurants force customers to use hand sanitizer as they walk through the door.

Around the world, more than 30,000 people have died from COVID-19. But when it all began, many foreign correspondents like myself didn’t know how “seriously” to take the virus, or what tone to take when portraying it to the public (especially as some called us alarmists). When the first few cases were confirmed in South Korea, I remember being quietly skeptical of canceled university graduations and having to work from home. Now, those acts of “social distancing” are exactly how health experts advise much of the world to “flatten the curve.”

As a freelance foreign correspondent, I’ve learned a lot covering this virus, and I hope to share some of those lessons here. I don’t have all the answers, nevertheless, this is a time for us journalists to exercise caution and ask ourselves big questions about how we convey information to the public.

Let the public know what we don’t know

Information changed quickly at the beginning of the outbreak, from symptoms to watch to naming the virus. At first, many referred to the illness as the “Wuhan virus” because it was first detected in Wuhan, China. Since then, the virus name has taken on several other forms, including “novel coronavirus” and “COVID-19.”

In the United States, President Trump has pointedly called it “the Chinese virus,” to much backlash (at the same time, hundreds of hate crimes against Asians are being reported). As journalists, we’ve quickly learned that what we call the virus and how we frame where it comes from can directly affect public perception.

Especially at the beginning of China’s and South Korea’s outbreaks, there were conflicting reports about how long the incubation periods could be — were they a few days, one week or two weeks? There was also confusion about what symptoms people with the virus show, and whether they would show any symptoms at all (now, we’ve found that people can be asymptomatic).

In the beginning, the popular narrative was that only the elderly should be concerned about getting extremely ill or dying. While death rates are significantly higher in older populations, it wasn’t until later that I heard people discuss risks for those with immune system diseases or other pre-existing conditions. Early data suggested that people with diabetes, high blood pressure, cardiovascular disease and other conditions were at greater risk — and that the risk of severe illness “gradually increases with age starting from around 40 years,” according to the World Health Organization.

If I’ve learned anything, it’s that the narrative about what COVID-19 is and who’s at risk could change yet again. As journalists, we have a responsibility to continuously let the public know what we don’t know — and that information about new viruses are ever-evolving. And to be fair, many reporters have done that.

I’ve already mentioned the implicit racism that comes with calling it “the Chinese virus” or “Wuhan virus.” But as a reporter, I’ve also had to consider the ever-shifting public blame that occurred alongside South Korea’s outbreak.

Here in South Korea, anti-Chinese sentiment was palpable as COVID-19 began to spread. As a journalist, I felt responsibility to address this by writing about it and discussing it on television and radio. But once patient 31 — a churchgoer often called South Korea’s “super spreader” — helped spur a massive outbreak in Daegu, that blame largely fell on a controversial group called the Shincheonji Church of Jesus. While reporting, I had to consider how journalists should characterize Shincheonji: Are they a “cult” or a “fringe religion” group? Or are they simply a “religious group,” and nothing else?

How we portray Shincheonji certainly matters. Personally, I decided not to include highly inflammatory quotes from South Koreans who were angry with Shincheonji, and I also struggled with the dilemma of covering the church without becoming a device for their PR.

Anticipate how government may use your reporting 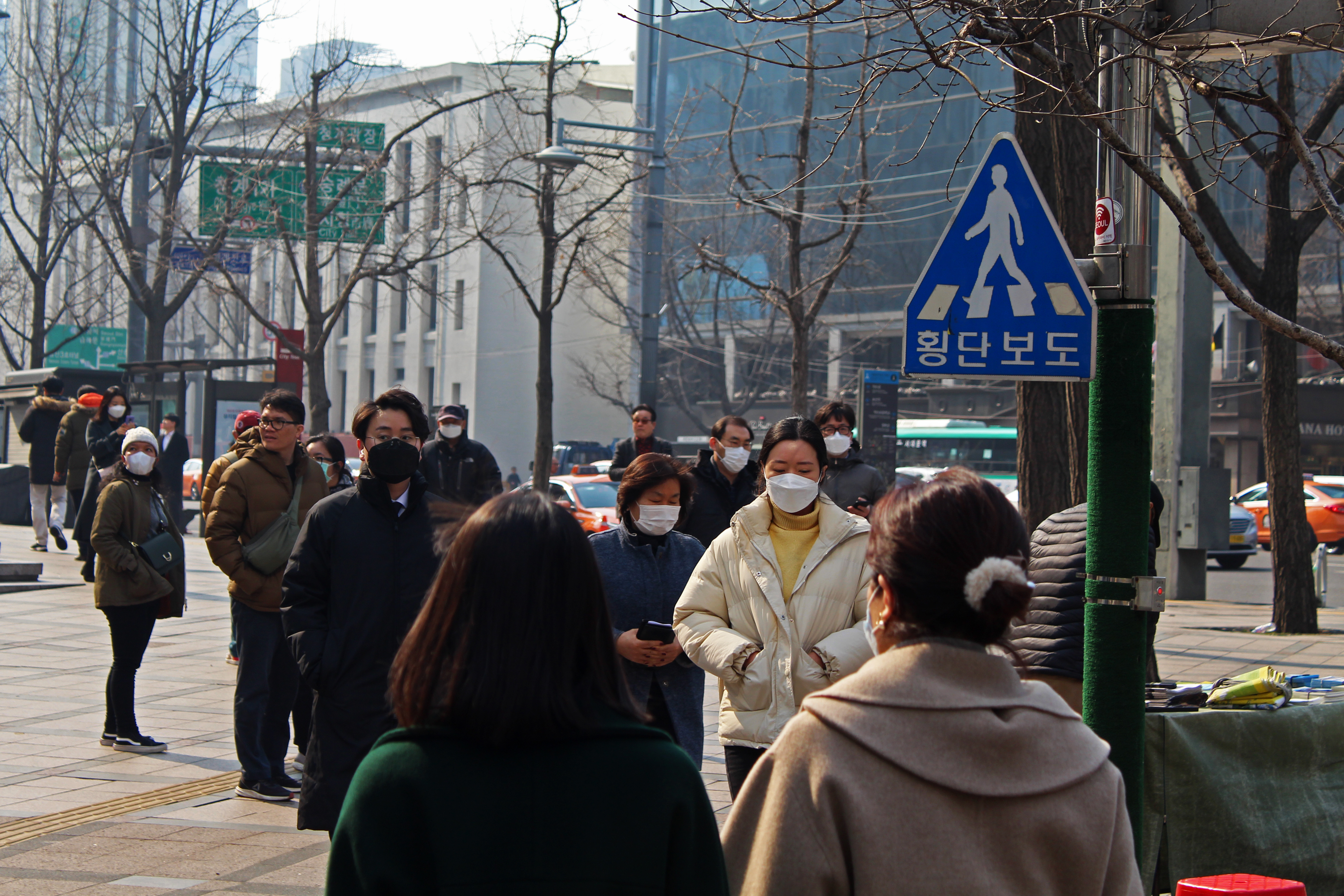 I am one of the many foreign correspondents who have covered South Korea’s largely celebrated COVID-19 response and what the world can learn from it. At the same time, I am aware that it has the potential to be used as a political tool.

Here’s a benign example: One government-funded news agency here wrote an article about one of my pieces on lessons that can be learned from South Korea’s COVID-19 response.

Raphael Rashid, a British freelance journalist based in Seoul, wrote an op-ed in the New York Times that  strayed from the popular narrative. He called the South Korean government’s initial response to COVID-19 “sluggish and naive,” and he discussed how government actions or public sentiment against Shincheonji may be unfair.

Since his piece was published, Rashid has received much backlash online from people who accused him of defending Shincheonji or not giving enough credit to the South Korean government. Days later, the South Korean foreign ministry even published a response to his article in the New York Times.

“Before taking on the New York Times piece, [journalist friends] around me joked around like, ‘Do you want to stay in the country, or do you want to be in the government’s bad books?’” Rashid told me, adding that he heard “several people within the government have been unhappy” with his article.

“Even though it’s just a joke, the fact that they’re saying this implies that, if you write a piece that goes against the popular way of thinking — the generally-accepted narrative — then you are going to create enemies,” he said. “… I had to ask myself: Am I strong enough to deal with that backlash? It shouldn’t be a question for me to think about.”

In China, journalists are most blatantly forced to think critically about what the government says. Fabian Kretschmer, a Beijing-based correspondent for Die Presse in Vienna, told me that reporting public opinion and the truth around coronavirus requires a “fine line between official [government] narrative and social media posts.”

“When Li Wenliang, the whistleblower doctor from Wuhan, died, I was overwhelmed by all the anger and grief I was seeing on social media,” Kretschmer said. “If I was more emotionally distant, I would have realized that this reaction was only temporary and not representative of the majority of the Chinese population.”

“It’s the same reporting principle as in Korea: I try to seek as many diverse sources as possible, and then evaluate them according to my own expertise and also my gut feeling,” Kretschmer added. “But in China, it’s ten times more difficult to do so.”

Kelly Kasulis is a freelance foreign correspondent based in Seoul, South Korea. Her work has appeared in Bloomberg Industry Group, TIME, Quartz, BBC, Al Jazeera English, The Boston Globe and The Sunday Times.

This article is co-published with the National Press Club Journalism Institute.