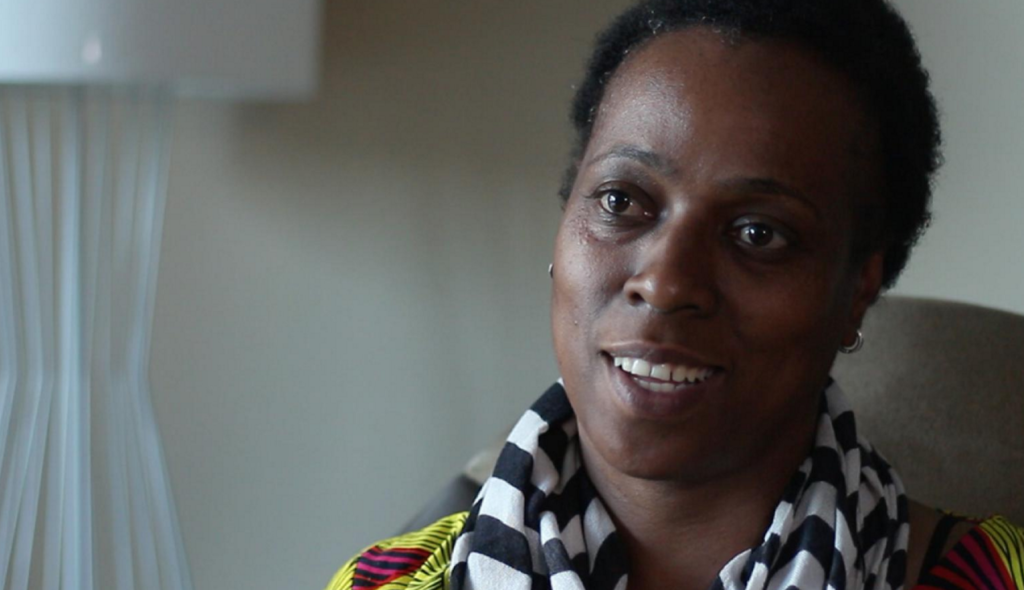 CAPE TOWN, South Africa — Yvette Raphael left the medical clinic in Midrand, Johannesburg with one thought running through her mind.

She wanted to be dead.

“At the time, AIDS deaths were described as very painful, very long suffering —everyone would know what’s wrong with you,” Yvette said.  “I thought it would take three months for me to be dead.”

In what she now counts as one of the luckiest moments of her life, the taxi coming down the hill slammed on its brakes, stopping right in front of her. The driver took her bag, found her diary with her address in it, and drove her home.

As Yvette, 39, recalls that day 15 years ago when she found out she was HIV positive, she looks healthy and bright like the yellow patterned dress she is wearing. She had come to Cape Town from her home of Johannesburg to take part in the first-ever HIV Research for Prevention Conference, convening researchers, academics and activists to discuss breakthroughs and challenges in the field of HIV prevention.

An HIV diagnosis is no longer a death sentence, thanks to advances in medicine and treatment in the last 30 years. But stigma against HIV/AIDS and fear of discrimination still run strong in South Africa, despite legal protections, as well as drastically improved treatment, prevention techniques and education. Today an estimated 19 percent of South African adults ages 15-49 are living with HIV.

And women, who represent about 60 percent of people living with HIV in South Africa, face a disproportionately large array of consequences, including physical violence and abuse.

“Upon disclosure of women’s HIV positive status,” reads a 2012 study by the AIDS Legal Network on gender violence and HIV, “women’s lives change, due to fear and the continuum of violence and abuse perpetrated against them.”

Although forced or involuntary disclosure of one’s HIV status — along with any discrimination that may result from that disclosure — was made illegal by South Africa’s post-apartheid constitution, experts and advocates say that public knowledge of these laws is limited and the legal system is not equipped to implement them.

Not only are women disproportionately affected by HIV, but they are also more likely to know their status. More women get tested, said Rukia Cornelius, community education and mobilization manager at the NGO Sonke Gender Justice, based in Johannesburg and Cape Town, because unlike men, women need antenatal care.

And often, she said, clinics give women HIV tests when they come in for prenatal visits.

The way hospitals and clinics are set up also are not always conducive to protecting privacy, said Alexandra Muller, researcher at the School of Public Health and Family Medicine at the University of Cape Town.

“People who provide services in the public system, at the community level, are community members,” said Muller. “This is an important dynamic when we think about stigma and disclosure.”

Doctors and nurses can see 60 to 80 patients per day in an overcrowded facility with shared consultation rooms, Muller said.

“There’s not a lot of consideration for how is a clinic set up,” added Cornelius, so that “a health care worker who has done your test and knows your status doesn’t shout across the room to the other health care worker, ‘okay, this one’s HIV-positive, that file goes over there.’”

Once HIV-positive women disclose their status, willingly or not,they are disproportionately affected by stigma because of the direct link between HIV and gender violence.

“Women’s experiences of living with HIV are a clear illustration of multiple forms of abuse and violence in all spheres of their lives, perpetrated by partners, families, friends, communities and service providers alike,” the study said.

“It’s about, generally, how society relates to issues of when, and how, we talk about sex and sexuality and power and gender norms,” said Cornelius. “And often, all of those things play out in overt ways that leaves women vulnerable and compromised.”

Yvette was diagnosed in 2000, and she didn’t begin talking about her HIV status until a year later. She started by joining secret chat rooms because no one in her life knew that she was HIV positive.

Then, her boss at SASSETA — an organization that promotes training and development for South Africans in the safety and security sector —asked her to arrange for a speaker for a World AIDS Day event they were planning.

With 80 colleagues in the room, she said, she told them her secret. “I told them I’m HIV positive. They don’t need a speaker, because I’m going to tell them about my life.”

When Yvette disclosed her status at work, she had not yet told her family. But she had a cousin who worked with her and told her relatives at a family meeting before Yvette had a chance to do so herself.

“I walk into this family house, and there’s close to 20 people there, all who know me, and everyone’s talking behind my back. Everything that I wanted to avoid,” she said.

“Everybody was whispering, saying stuff that I did not understand,” she said. “The fact that she went and disclosed my status to other people did more harm than good.”

It was because of her positive HIV status that Yvette picked up the South African constitution for the first time.

South Africa’s constitution is one of the most progressive in the world and ensures the right to privacy and equality. The Promotion of Equality and Prevention of Unfair Discrimination Act (PEPUDA), passed in 2000, gives effect to the equality clause of the constitution by outlawing forced disclosure of HIV status and discrimination based on one’s status, said Katy Hindle, an attorney and the policy development and advocacy research associate at Sonke Gender Justice.

Yvette said she didn’t want to pursue legal recourse against her cousin because it was close family.

After three years without speaking to her cousin, Yvette said, she eventually forgave her, realizing that she hadn’t meant harm. Rather, Yvette said, her cousin just had not known what to do with the information she had been given.

Even when women do know that their rights are protected, reporting cases of forced or involuntary disclosure or discrimination based on HIV status can be challenging, and access to court systems can be difficult.

Section 27, a Johannesburg-based public interest law center, has tracked only 12 cases related to HIV, discrimination and confidentiality that have been brought to court since 1993.

“I’ve heard it referred to as ‘magic legalism,’ which is this idea that you enact something, and because it’s progressive and it’s the right kind of legislation, it will suddenly have a ripple effect of positive benefits,” said Hindle. “In practice, that isn’t the case, and that hasn’t been the case in South Africa.”

Police stations are often not set up to allow women to disclose their status to a police officer privately, said Cornelius. And even if a woman does report a rights violation, it takes a lot of time and money to go through with legal action — two things that many women don’t have.

“If a woman’s status if involuntarily disclosed and she decides to take legal action in that regard, she’d have to have a lot of financial resources,” Cornelius said. “If you don’t have the resources? Good luck.”

Access to court systems is further limited by the public’s perceptions of the legal system, which were heavily shaped during apartheid, said Hindle.

During apartheid, “the legislature and the parliament in South Africa would pass laws that weren’t based at all on the will of the majority and weren’t democratic or fair. I think because of that, most people don’t really come to realize courts as a place where you can access or protect your rights,” she said.

Stigma related to HIV/AIDS has decreased in South Africa and views have shifted, stated an article published this year by BMC Public Health, which outlines the results of an exploratory survey to measure stigma in the country.

Improvements in treatment and scientific advances are an additional source of decreased stigma, said Hindle.

“A lot of people who are HIV positive … live healthily, they live for much longer, they live comfortably. And all of those things, I think, have positively impacted discrimination and stigma,” she said.

Still, the survey on stigma concludes, “the advances made by scientists in the diagnosis, prevention and treatment have unfortunately not been matched by advances in social acceptance of the disease.”

After disclosing her status, Yvette helped the safety and security sector conceptualize an HIV/AIDS policy, and she was appointed as the HIV/AIDS coordinator for SASSETA. Now a 2014 fellow at AVAC — a nonprofit organization dedicated to global advocacy for HIV prevention — Yvette counts herself as an activist.

Her real motivation is her children, she said. Her daughter is now 15 and her son is 7.

She has used milestones in her daughter’s life as markers — first she vowed to see her through daycare, then to five years old, then to ten. She said her kids are her yardsticks in life.

“When I was diagnosed, I was in a very bad space. I was in a space of almost being suicidal, and getting past that is taking it one step at a time,” Yvette said. “We all need to find that reason why we live, why we are alive.”