ON THE GROUND IN RIDGELAND, MISS

‘For me, that’s not living:’ In Mississippi, teachers struggle to make ends meet 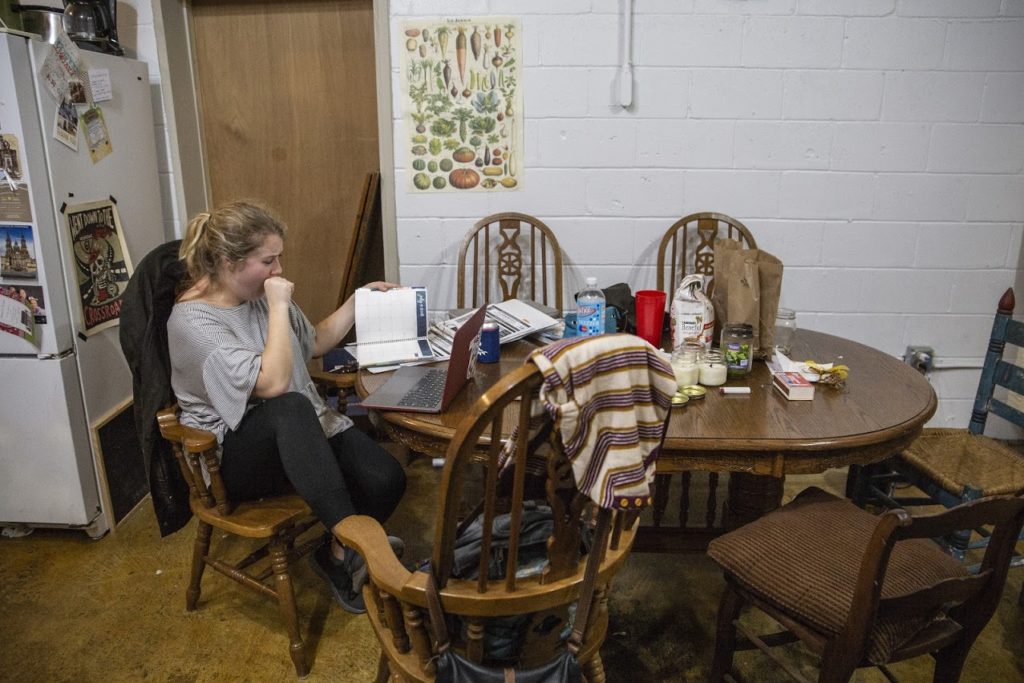 Barton yawns as she works on a lesson plan for her high school English class that she teaches during the day. (Photo by Eric J. Shelton/GroundTruth)

RIDGELAND, Miss. — Kaitlyn Barton, 25, is a full-time English teacher at Clarksdale High School. As soon as the bell rings at the close of the school day, she is off to her second job at the Yazoo Pass, a local restaurant, where she spends evenings serving customers, pouring coffee and bussing tables.

When the boots come off at the end of her day, contact lenses stored away, and eyeglasses positioned on top of her nose, she is quickly confronted with the next item on her agenda.

“The day is not over yet,” Barton says as she yawns, sitting in front of the computer at her kitchen table. Even after a 13-hour day, she still has to grade papers and finalize lessons plans. Only after those tasks are complete can she shut down the computer, turn on the television with her dog, Olive, and enjoy a brief respite before her daily routine starts all over again.

A teacher’s role is defined by service. It requires dedication, humility and sacrifice. Hours spent preparing students for the world before they have to tackle it on their own. For Barton and most teachers in Mississippi, however, these characteristics are tested beyond limits when there are little resources to not only perform job duties, but to survive outside of the classroom. For some, even though they may be passionate about their profession, a low salary makes their eyes wander to explore other careers just to stay afloat.

Barton, a Teach for America Corps Member, struggles to make ends meet. With more than three years of experience teaching English at Clarksdale High, she still makes less than $37,000 annually — significantly less than the national average of nearly $60,000. Data from the United States Labor Department show that Mississippi has some of the lowest teacher salaries in the United States. They’re also teaching in a scarce environment where there have been teacher shortages for decades, and textbooks and supplies are outdated. Barton brings home nearly $2,700 a month. She splits rent with her roommate, who is also a Teach for America Corp Member, in order to save on living costs, which include car payments, food and care for Olive. Both teachers are fortunate that, with Teach for America, they have access to benefits such as student loan assistance and funds for pursuing a teacher certification. But after all her expenses, Barton still only has enough to get her through the next month. That is what led her to waitress at Yazoo Pass.

“The second job allows me to pay all my bills with a little extra cash for leisure,” said Barton. “Without the second job I would be living strictly paycheck to paycheck, and for me, that’s not living.”

Barton first wanted to become a teacher following her love for the classroom. “I am a product of Mississippi public education–kindergarten through college.” Barton said. “I have always loved school, the act of learning, desks in a row, whole group debates and I love asking questions.”

In her classroom, Barton leads students with an enthusiasm that is contagious. Her students seem comfortable and eager to learn.

Although she loves her position as a teacher, she is considering other options. “I absolutely love my students, but the school environment can be difficult to navigate,” said Barton. “From low pay to exhausting testing expectations, education is a difficult field.”

Recently, Mississippi lawmakers passed a bill that, beginning July 1, increased teachers’ salaries by $1,500. But Mississippi teachers were, by and large, unimpressed by the modest increase. The Mississippi Association of Educators president told the media outlet, Mississippi Today, that the process has been insulting. Clarence Hayes, the principal at Clarksdale High School said that the small pay raise was a “slap in the face.”

The last pay raise for teachers was in 2014. The state government passed a law that gave pay raises and rewarded teachers in high performing schools or those that showed improvement. It had been modest, too.

This leaves educators with multiple dilemmas and very few options.

For Barton, this is examining her career path, moving to a higher paid position in education and leaving the classroom.

Barton recently obtained her graduate degree, where she studied school administration and leadership. “This will open doors for upward mobility within education,” said Barton. “However, I’m not sure that’s where I want to be anymore.” “Speaking with complete honesty, I’m not sure that raising my pay will keep me in the classroom. Teachers are expected to act professionally without receiving the respect of a professional,” she said.

Eric J. Shelton is a Report for America corps member and the first photojournalist at Mississippi Today. This essay is part of a series called “On the Ground,” supported by The GroundTruth Project.