ON THE GROUND IN MINNEAPOLIS, MN

For Black Minnesota voters, equality is on the ballot 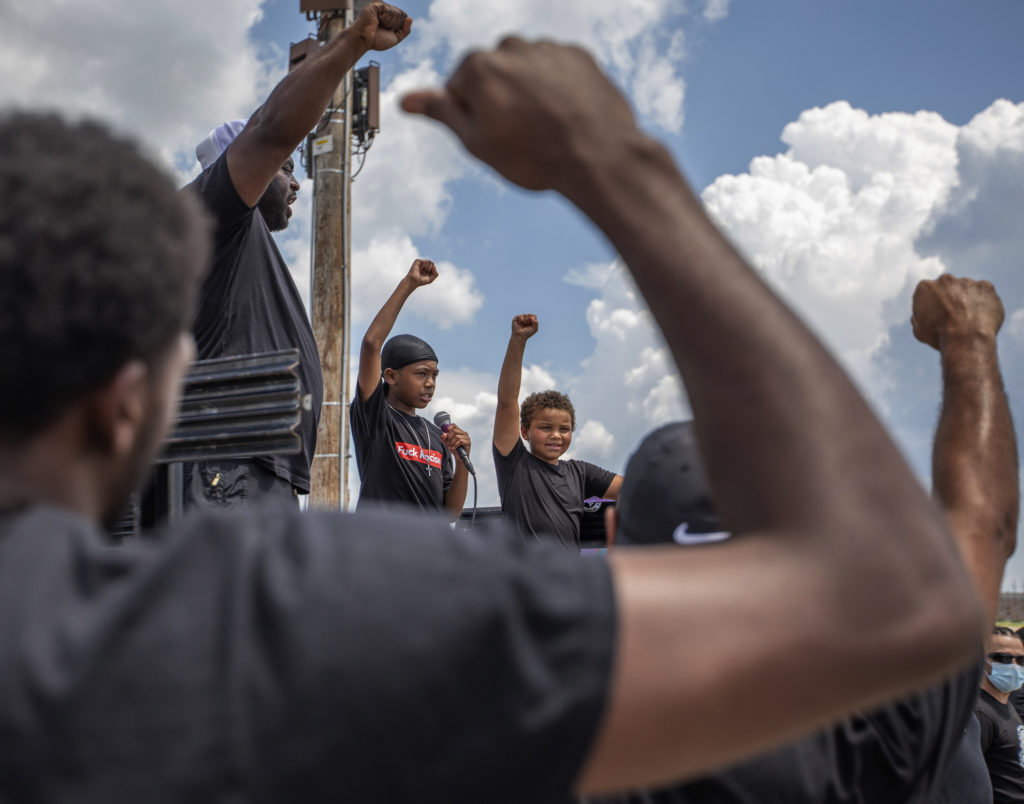 Protesters raise their fists as they listen to a child talk to the crowd in a parking lot in Bloomington, Minnesota before they marched to George Floyd Square in Minneapolis on July 5, 2020. (Photo by Chris Juhn/GroundTruth)

MINNEAPOLIS — The morning after a record snowfall in Minnesota, the city was quiet. But at George Floyd Square, the caretakers of the memorial were hard at work. People chopped and stacked wood for fires. They collected winter weather gear for the needy. Someone had already cleared a path to the landmark fist sculpture at the intersection of 38th and Chicago.

Ordinary people — teachers and parents and singers —  continue to occupy the city street, organizing patrols through the night, a local vigilance lost on some outside the city, which in May became ground zero of the nation’s long-coming reckoning. National eyes once fixed on the intersection have now turned to the election.

“This is bigger than Martin Luther King,” organizer Andrew Jackson told me as he fed a fire for warmth. The movement that sprung out of south Minneapolis, he said, was the second coming of the civil rights battle. “We had all of the U.S., 13 countries. The world has literally protested for a change.”

Related: A spark in Minneapolis: From grief to activism

Floyd’s death is another notch in the belt of American racism, and to counter that continued tragedy Black voters are taking the possibility of change into their own hands. Many of the people who have tended to the square throughout the summer are well aware of the importance of the election, of this community’s vote.

Though some Black activists are turning away from the presidential contest, calling it a catch-22 with no option that will truly move the country in the direction of racial equality, they are instead focusing on state and local elections that they believe will have more direct impact on their lives.

But at an early voting center in downtown Minneapolis that same day, an uncast vote in any corner of the city was unfathomable. Many older Black people saw voting as due diligence, duty. A 74-year-old woman said she’d voted for 56 years. They are exercising the rights their mothers and fathers may not have had, or may have been intimidated from.

It is a familiar story among Black Americans who believe that the fight for enfranchisement continues well-past the Voting Rights Act and into next week.

That movement in Minneapolis, of Black people casting their votes after a summer of awakening, will likely radiate across the country as the results stream in. With my colleagues at the Star Tribune, I sought to capture this momentous wave of Black voters casting ballots in a landmark year for racial justice and equality.

The power behind that vote, behind the death of Mr. Floyd, behind the summer of grief and unity, protest and activism that followed, will soon be seen. America faces its truest litmus test yet.

Zoë Jackson covers young voters for the Star Tribune. Read the full Star Tribune article here: For Black Minnesota voters, equality is on the ballot’ (with Patrick Condon and Jeff Hargarten). Follow her on Twitter: @zoemjack.