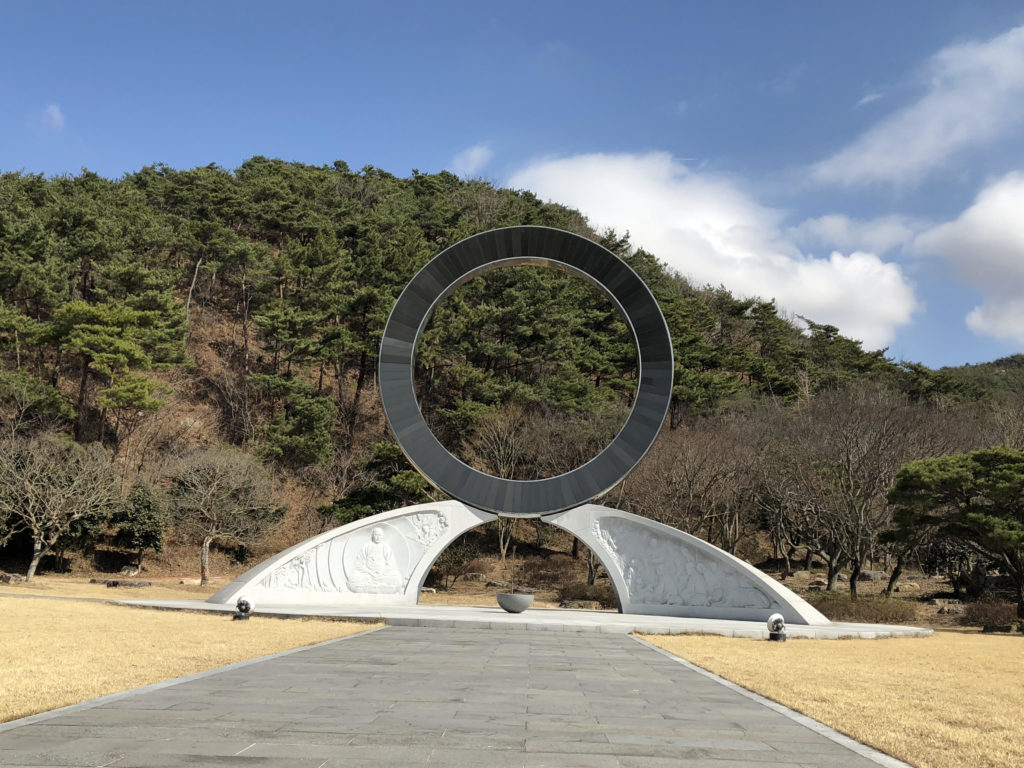 The circle is the symbol of Won Buddhism, representing the enlightened mind and the interconnectedness of all beings. (Sherry Simpson/GroundTruth)

YEONGGWANG COUNTY, Korea – Grace Song is a Won Buddhist minister. Instead of the traditional robes and shaved head associated with Buddhist clergy, she sports a stylish K-pop inspired hair — shaved around the sides and back with a tuft on top — and wears an expensive trench coat and Nike sneakers.

She moves around the quiet rural campus of Youngsan University, the graduate seminary for Won Buddhist studies, with the determined gait of a city dweller navigating urban blocks during rush hour. The region Youngsan University sits in seems untouched by time. Open fields ensconced by mountains and tall trees reflect the religion’s core connection to nature. Many of the student gatherings take place outside in areas where the religion’s founder Park Jung-bin — who took the name Sotasaen — and his original nine disciples communed.

Won Buddhism is a contemporary Korean take on an ancient tradition, founded by a Korean man in the early 1900s. Park Jung-bin came from a family of farmers and grew up during the Japanese occupation of Korea. In 1916 he had an epiphany: religion must be adapted for the average person living in an increasingly fast-paced modern society. His new religion would not include secluded retreats and long rituals. Rather his practice of Buddhism would emphasize engagement with the world, especially in caring for the Earth. He chose the name Won, meaning circle, to symbolize the world’s interconnectedness.

The religion is growing steadily. It has over 130,000 members in Korea and is growing internationally with temples in Australia, the United States, and Europe. “Unlike other new religious movements in Korea whose influence has waxed and waned with the times, Won Buddhism has experienced a slow but steady growth, and its overall influence in Korean society has grown considerably,” Daniel J. Adams, an emeritus professor at Hanil University in Jeonbuk, Korea, says.

Grace Song was born into a Won Buddhist household. As she grew up, she related to the simplicity of the scriptures, especially their connection to daily routines. “Traditional Buddhists, yes, they can talk about suffering. But more and more, it is becoming a more materialistic, scientific and technological world. How are you going to create [a] teaching to address those conditions? In Won Buddhism, you can’t separate living from practice. Everywhere should be your temple,” she says.

“Won Buddhism scriptures teach that mindful nonviolent-approaches can lead to societal change,” says Eunsook Cho, a leader who is active in Won’s environmental activities. Cho says that more than 4,000 people have walked to the gates of Hanbit where they engage in prayer. They are praying that the government will shut down the plant and turn away from potentially harmful nuclear energy.

Since 2012, the Youngsan students participate in a peaceful weekly march from the university to the Hanbit Nuclear Power Station. The Life, Peace, No Nukes Pilgrimage starts at 10:30 a.m. every Monday morning and takes around five hours. “Each step is a practice. It is a modern incarnation of the Won Scriptures,” Song says. 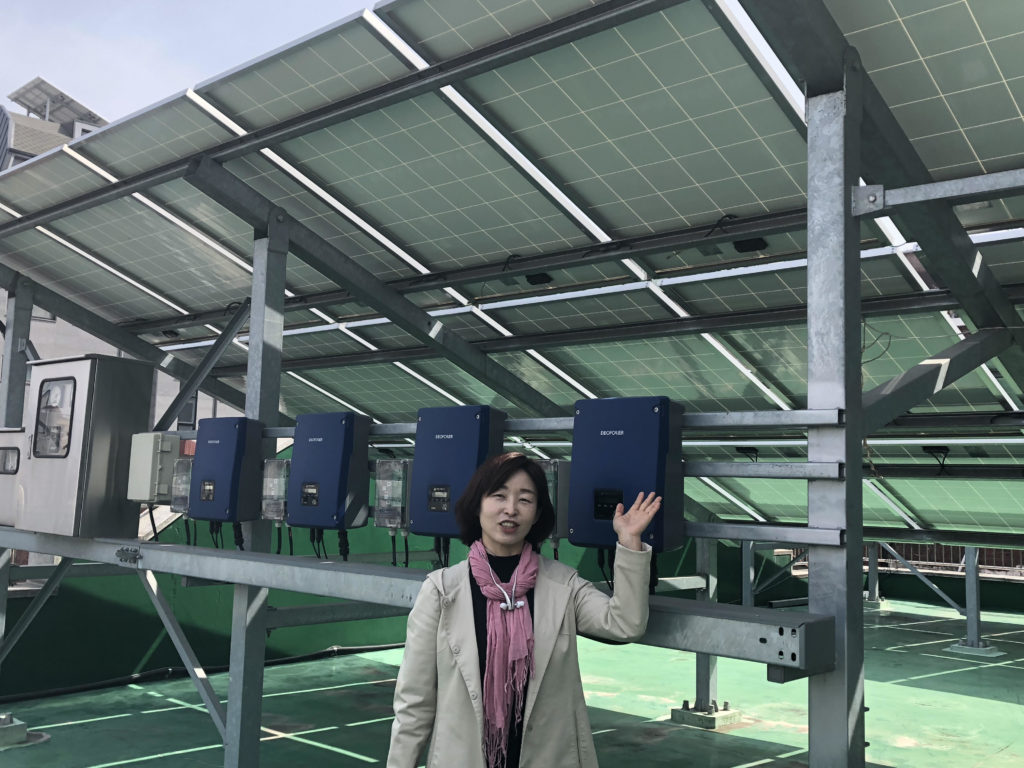 Eunsook Cho of Won Buddhist Eco Network stands in front of the solar panels on the roof of Song-cheon Won Buddhist temple in Seoul. (Sherry Simpson/GroundTruth)

When President Moon Jae-in shut down the country’s oldest power plant, Kori 1 in Busan last year, Won Buddhists and other anti-nuclear groups believed it would signal the end of nuclear energy in Korea. But Hanbit is still in operation, and nuclear energy is a component of the Korean government’s Five Year Plan for Green Growth.

In addition to their continued protests, the Won are focusing on promoting a safer, greener, cheaper alternative to nuclear energy: solar power. In 2016, Won Buddhists launched a Dung-geun Solar Power cooperative to aggressively invest in solar power. The co-op builds solar power panels on rooftops and on parking lots in Korea and is funded by contributions from co-op members. It creates revenue by distributing the generated electricity.

Cho and other leaders received funding from the cooperative for a campaign to pay for solar panels in 100 Won temples in honor of the 100th anniversary of the new religion. They met their goal.

“We have been asked many times when the end [of the nuclear protests] is,” Cho says. “An old man who regularly participates in the pilgrimage walk in Yeounggwang said, ‘I am old, but I have a responsibility for the young. My pilgrimage will be ended when I die or Hanbit Nuclear Power Plant will stop.’”