Closing the gap between climate change and local reporting 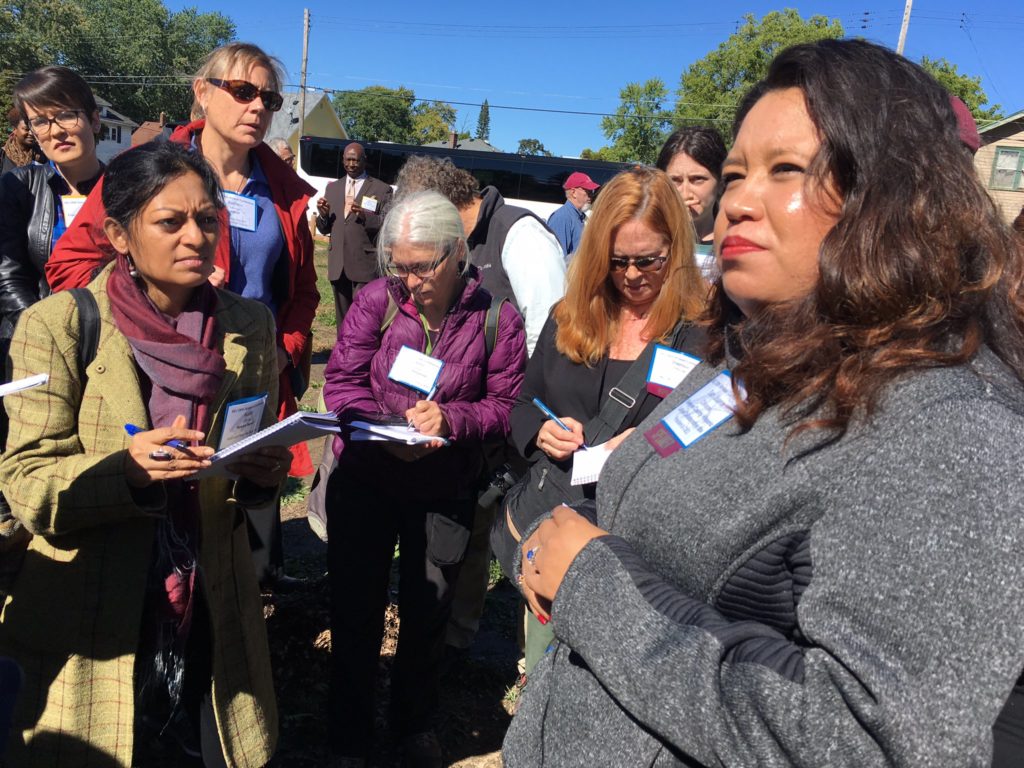 Juani Olivares works to get information and services to thousands of Hispanic residents in Flint, many of whom don't speak English, and many of whom are undocumented. (Photo by Samantha Fields/GroundTruth)

In a week where a new United Nations report warned that time is running out to stave off the worst effects of climate change worldwide, environmental journalists from all over the world converged in Flint, Michigan, for the Society of Environmental Journalists’ annual conference. Our environmental reporting fellows Pien Huang and Samantha Fields attended the event and covered it on social media — including a takeover of our GroundTruth channels. Here are some of their highlights:

How to communicate effectively on the effects of climate change was one of the topics of the conference. Edward Maibach, director of the Center for Climate Change Communication at George Mason University, argued that journalists should understand the public and how they react to environmental coverage. On this topic, he said, there are “Six Americas.”

When it comes to global warming and climate change, there are “six Americas,” Ed Maibach says at #SEJ18. “I, myself, am in the ‘alarmed’ sector way over there on the left.”

Only difference between categories is WHEN people see climate change coming home to roost. pic.twitter.com/yDDqonWdy0

Others like Paul Gross, Meteorologist at WDIV-TV in Detroit, highlighted the importance of contextualizing the effects of climate change to help people understand its local impact:

When reporting on climate change, “you need to localize and you need to make it tangible,” says @PGLocal4 at #SEJ2018 pic.twitter.com/HGzGSW9GDS

“The public has a huge appetite for unbiased communication about climate change,” said Gross.

“If you have allergies, that matters to you.” -Paul Gross, #SEJ2018 pic.twitter.com/oLeHhDVpkU

When providing context, reporters have to be careful to not fall into the trap of false equivalences. For example, the supposed “disagreement” among scientists on climate change is minimal, argued Susan Hassol, director of the science and outreach non-profit Climate Communication.

“People think that there’s much more disagreement among scientists than there is,” says @ClimateComms at #sej2018. In fact, 97 percent have concluded that climate change is real. pic.twitter.com/6Rj3gRWJPV

Journalists – and scientists – have to be very careful not to use jargon in talking about climate change, says @ClimateComms at #sej2018. (Like “positive feedback” and “enhance” – which sound positive to most people but are actually negative when talking climate change.)

An on-the-ground look at Flint

Our fellows also had the opportunity to visit the communities affected by the ongoing water crisis in Flint and spoke with some of its residents about how they have coped with the lack of a reliable water supply and the high prices of the utility.

Jassmine McBride was 26 when she got Legionnaires’ disease in Flint in 2014. Asked what help and support she’s gotten from the city, the state, the hospital since then, she and her mom say, at the same time, “nothing.” #SEJ2018 pic.twitter.com/adtTTTy5sr

“One of the big issues were dealing with now is water affordability,” says @pamlpugh. It was also water rates that precipitated the Flint water crisis. #SEJ2018

Edna Sabucco has lived in Flint for 30 years. She and her friend, along with kids from the neighborhood, are working to turn this series of empty lots, where homes have been torn down, into a park, with fruit trees and berry bushes. #sej2018 pic.twitter.com/cimN36Gg14

For local experts, it was an opportunity to highlight Flint’s struggles with the water crisis for a national group of journalists:

“The water crisis is not the worst thing that’s happened to Flint,” says Debra Furr-Holden. “It put Flint on the map.” But, she says, the biggest challenge for Flint is poverty. #SEJ2018

“One of the big issues were dealing with now is water affordability,” says @pamlpugh. It was also water rates that precipitated the Flint water crisis. #SEJ2018

The role of lead regulation was another aspect discussed in the conference’s panels. The crisis in Flint is not an isolated incident. Many other communities across the country have similar troubles.

“The Flint crisis is just a symptom of the larger lead crisis across the country,” says @YCabreraOC at #sej2018. And not just in water, but in paint and in soil.

“0 parts per billion is the safe level of lead in water,” says @SafeWaterEng. The EPA’s 1991 Lead and Copper rule, which sets the limit at 15 ppb, “was designed for corrosion control – NOT public health.” #SEJ2018

The #FlintWaterCrisis could have been avoided with basic chemistry, says Monique Wilhelm @UMFlint. “Adding phosphates to the water would have cost $50k/year.” With permanent damage to infrastructure and people’s lives, “How much do you think it’s costing us now?” #sej2018

Policy changes are transforming the landscape of environmental journalism. The EPA’s diminished role in the Trump administration is creating new challenges for environmentalists, but also story opportunities for reporters, both at the national and local levels, according to Eric Lipton, investigative reporter for the New York Times.

There’s been a “significant decline in enforcement activity of the EPA,” says @EricLiptonNYT. Whether that means air & water pollution across the US is already getting worse, or will get worse on a wide scale, “I don’t know.” But there are places where that’s happening. #SEJ2018

Lipton reminded the attendants to keep their focus on the local effects of policy to help readers understand the effects of Washington’s decisions.