Fixing our media starts with the next generation of journalists 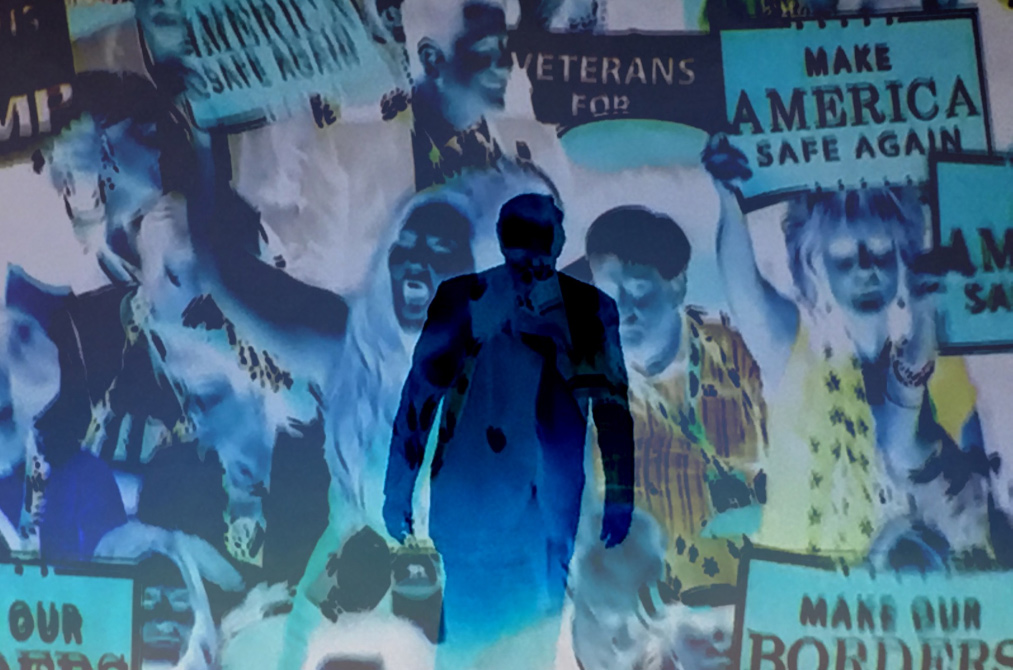 “The goal is not to fear Trump, but for Trump to fear you," wrote Ari Goldman, a professor of journalism at Columbia University. (Photo by Elizabeth Herman/GroundTruth)

Okay, we got through Thanksgiving.

As families and friends across America came together for the holiday meal, most ended up talking – or working very hard not to talk – about the most bitter and divisive presidential election in recent American history.

No matter what side of the table you might be on politically, there was at least one place Americans seem to have found consensus while passing the stuffing. That is, that the media let everyone down in this election.

This election marked an epic failure of many large media outlets to get the story right, and a failure to hear what Americans particularly in the middle of the country are saying. Never before has it been so painfully obvious that new models for journalism need to emerge and that a new generation of journalists need to be brought along to do work that matters on the big challenges we face as a country and as a world.

That’s why we at The GroundTruth Project have never felt more focused on our mission. These days, we’re more committed than ever to redoubling our efforts to be part of the solution to saving journalism because without strong, independent reporting, democracy itself is in great peril.

So, as we shift from a day of giving thanks to the season of giving, we hope you will consider supporting GroundTruth and its mission to train a new generation of journalists.

Support the future of journalism on this Giving Tuesday.

The support you provide will help us fund top, young reporters and continue our coverage of stories that matter including climate change; youth unemployment; rising inequality, religious extremism and human rights. Our writers, photographers and videographers, who we support through reporting fellowships, are producing award-winning work that rises above all the shouting and crass partisan coverage that marked this election.

We believe a new generation of journalists is badly needed after an election in which so many traditional organizations missed the story of Donald Trump. Well-established newspapers like The New York Times, public media mainstays like NPR and new media organizations like Politico all got it wrong.

It was a collective failure to see the mood of an American electorate in the middle of the country intent on overturning the status quo and punishing perceived elites on the coasts, particularly the media. Most importantly, the media covering this race failed to enlighten and inform the American electorate on the biggest issues of the day. It gave more attention to the size of Trump’s hands than the scale of climate change. It allowed candidates to hurl insults and lies, but failed to pin them down on what they would do to address income inequality or the loss of industrial jobs. It didn’t know how to respond as the election went beyond the normal rough-and-tumble of politics into some darker corner where populism suddenly feels menacing to so many.

It doesn’t really matter whether you believe the news reporters are out-of-touch liberals on MSNBC or conservative fear mongers on Fox News – or just robotic practitioners helping the corporations they work for like CNN score record profits from the high ratings.

What matters is an acknowledgement that the media as we know it is badly broken and in need of repair. The echo chambers of the digital age — with shouting on the left, shouting on the right and a vanishing middle ground — have made us all hearing impaired and uninformed.

Indeed, trust in newspaper, television and radio news is at an all-time low, according to the Gallup polling agency. Now only one in three Americans (32 percent) actually have a great deal or fair amount of trust in traditional news organizations to report the news “fully, accurately and fairly.” That means fully two-thirds of the country do not trust the media.

A good argument can be made that a question about “trust in the media” is flawed in its approach because it lumps all media together. The fake news fabricated by websites in Macedonia get the same tag as a newsroom where scores of experienced political reporters and editors tried their best to get it right. But with that rather large caveat aside, the Gallup poll is important and the decline in trust of journalism is significant and undeniable.

Gallup has been tracking this question since 1972, and found the highest level of trust came in 1976 when 72 percent of Americans vouched for the media. It was a time when crusading reporters were viewed as heroic for exposing the Watergate cover-up and questioning America’s involvement in Vietnam. Since then confidence in the press has slowly and steadily fallen.

And trust dropped sharply over the last year, a total decline of 8 percentage points, as American news consumers watched a presidential campaign descend into crass insults, name calling and vitriol as the media seemed flat-footed on how to respond.

“Make no mistake. This is an epic fail,” said Margaret Sullivan, media columnist for The Washington Post, on the day after the election.

Journalism is in trouble on many fronts. First, it has never been more dangerous to be a reporter in the field with more than 1,220 journalists killed since the Committee to Protect Journalists starting keeping statistics in 1992.

The 2014 murder of freelance journalist James Foley, who worked with us at GlobalPost and GroundTruth, by the self-proclaimed Islamic State in Syria was a defining moment for just how dangerous it has become. And Foley’s death as a young journalist who wanted to bear witness to war became a unifying narrative for news organizations to call for A Culture of Safety (ACOS.) The agreement, which has  more than 75 international news organizations as signatories, outlines a set of shared standards and practices for dangerous assignments for news organizations and freelancers to be sure they are operating safely. GroundTruth is proud to be among the founders of ACOS.

Last week at the Committee to Protect Journalists annual gathering, which typically focuses on threats to journalists in repressive regimes around the world, the spotlight on protecting journalism shifted closer to home as Trump’s attacks against the American media were a recurring theme.

New Yorker editor David Remnick told the annual gathering of the Committee to Protect Journalists in New York City, “This year the threats to press freedom are quite close to home. It’s right here.”

Christiane Amanpour of CNN sounded a similar note of alarm in the wake of the election of Trump who has been more openly hostile to the media than anyone elected to the White House since Richard Nixon and his famous and oft repeated line: “The press is the enemy.”

“I never in a million years thought I would be up here on stage appealing for the freedom and safety of American journalists at home,” Amanpour added.

Amanpour called on journalists to “recommit to robust fact-based reporting” and to fight “against normalization of the unacceptable.”

The great weakening of journalism in America is caused in part by the financial struggle newspapers and networks are facing amid the disruption brought on by the Internet.

Newsrooms have been gutted over the last 25 years as newspapers are reporting a 60 percent decline in jobs from a height of more than 450,000 in 1990 to 185,000 jobs today. Amid that steady decline of journalists able to make a living in the digital age, traditional news organizations have failed to find business models that can sustain big staffs and in-depth journalism. The revenue for digital advertising simply does not provide the same support for great reporting that the print subscription model did.

That decline is felt most acutely at regional newspapers. As a result, readers are missing ‘ground truth’ in cities and towns across America that exist outside the eye of the coastal elites and their larger and healthier news enterprises that have successfully shifted to online news organizations like The New York Times.

That lack of regional news is one reason that the media on the coasts so dramatically failed to hear the frustrations of Americans in the so-called “flyover states” who lost industrial jobs and feel free trade agreements are working against them; who view immigration policies as a threat to the fabric of the country; and who see Wall Street and Washington as rigging the system against them and the media as part of the plot.

Missing that big a story in America has the media reflecting, and it needs to reflect. We all need to be much better at listening. But journalists also need to stand strong, to muscle back into relevance. Journalists should not be shaken or distracted from the need to keep doing public service work that enlightens and informs, as Edward R. Murrow put it, “without fear or favor.”

Earlier this month at Columbia J-School, in the aftermath of the long night in which it became clear that Trump had won a stunning upset in the election, Professor Ari Goldman huddled with a group of student reporters. He told them about Nixon’s hostility toward the media and reminded them of the legendarily dogged work of the Washington Post’s Woodward and Bernstein that would eventually topple Nixon.

As Goldman put it to a new generation of aspiring journalists, “The goal is not to fear Trump, but for Trump to fear you.”

A donation to The GroundTruth Project supports the future of journalism. Click here to make a donation.