Finding sources who ‘live in the shadows’ 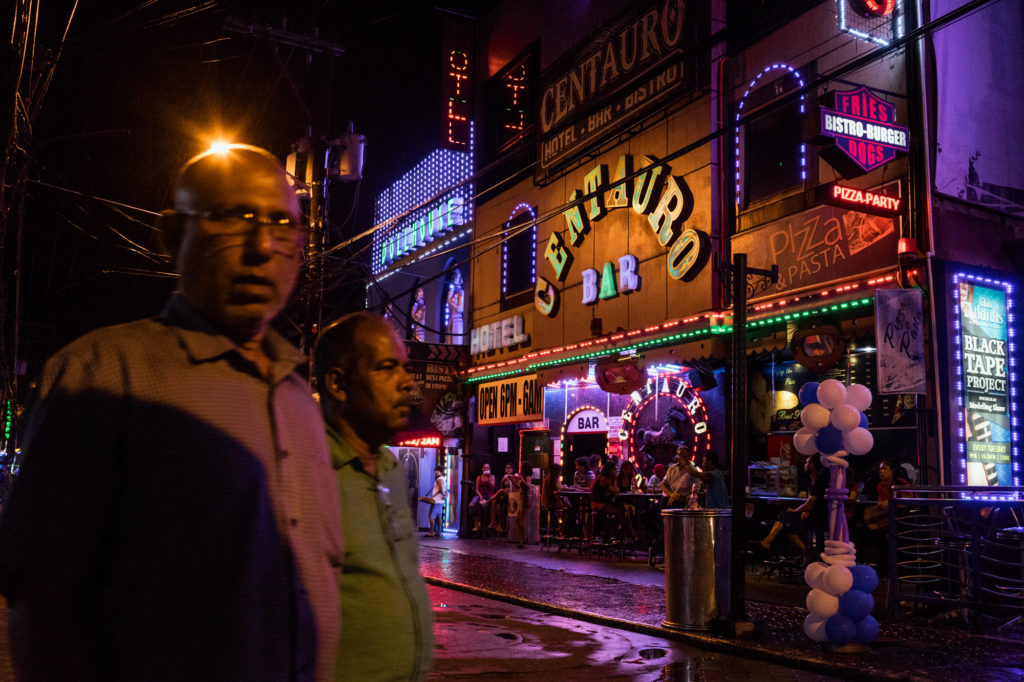 A scene from the red light district in Angeles City, Philippines. In their work on human trafficking victims and survivors, our climate fellows worked through NGOs to meet some of their sources. (Hannah Reyes Morales/The GroundTruth Project)

One important service of journalism is giving voice to the most vulnerable people in society.

Phillip Martin, an investigative journalist for WGBH in Boston, is interested precisely in these sources: people who, as he says, “live in the shadows” — victims of human trafficking, unsheltered homeless individuals, formerly incarcerated people, undocumented agricultural workers.

But finding these vulnerable individuals and convincing them to speak with you can be a challenge. Phillip has these tips for finding sources and for conducting interviews with them.

1. Find a third party to connect you to sources

This is especially true when you’re trying to find sources who’ve experienced trauma. You’ll want to reach out to social service organizations who are dedicated to working with particular populations, and have them connect you to their clients.

“It’s through a third party, almost always, that you are able to reach some of the most disenfranchised voices,” Phillip said. “If it comes to inmates, it’s going to be through their lawyers or families. If it’s homeless people, it doesn’t mean you go to an overpass and start interviewing homeless people. Because people are going to be distrustful, for good reason. So find someone who works with the homeless, who has already gathered their trust.”

“There’s nothing more important in terms of reporting when you’re talking to disenfranchised people than to make sure that they are imbued with dignity,” Phillip said.

If you’re going into a neighborhood or community that has often received negative media attention, residents aren’t going to want to talk to you, or if they do, it will likely be perfunctory and uninformative.

For the insight, you have to put in the time to get to know community leaders, and show up in those communities to prove you’re invested in them, and gain their trust as a responsible journalist.

“It is so important to have someone in that neighborhood…introduce you to those folks,” Philip said. “You want to develop a relationship with those intermediaries where they are not just introducing you, but they are vouching for you.”

2. Once you locate your sources, learn as much as possible before the interview

Learn about the circumstances that inform your source’s life so that you aren’t making any presumptions or playing into stereotypes. This is especially true if you’re covering a community that you don’t live in, whether it’s a neighborhood or another city or country, or if you’re interviewing someone whose experience is nothing like your own.

“One of the first ways to challenge stereotypes is you have to know history and read history. Reporters who don’t read or know history, I find that really problematic,” Phillip said. “I did an interview in Baltimore years ago, and my first thought was Baltimore is very similar to Detroit, my neighborhood. That was wrong. That was presumptuous. So what I had to do was read about the neighborhood and look at something beyond ‘The Wire’ in order to understand where I was. When did the murder rate accelerate, when did crack cocaine take over the neighborhood, relationships with the police, the political history of the area, understand who the council people for that area are, understand mayoral politics.”

3. When you’re ready to do the interview, set ground rules and be empathetic

We’ve covered this some in a previous Navigator, but it is important to emphasize that you should be grateful and humane when someone entrusts you with their story.

When Phillip interviewed two human trafficking survivors for his story, whom he met through a social services organization, the interview took place in the organization’s building, a place that felt safe for them.

“The woman who talked about labor trafficking was very candid…the other [woman] was very shy, and at times tears welled in her eyes, and there were times when I said, ‘I’m going to turn [my recorder] off.’ A lot of editors would say, ‘Are you out of your mind?’ because some of the best moments occur during those emotive settings. But it also lends itself to extraordinary exploitation. And so I said, ‘When you’re ready to talk, I’m going to turn this back on.’ And she was. And that’s how we were able to develop a degree of trust.”

And it is important to listen to people and not treat the interview as purely transactional.

“I did not turn on my microphone right away, I asked about her family before I turned on anything,” Phillip said of the survivor he interviewed.

He adds, “It’s important to spend some time with these folks, to not just record, but listen.”

However, that doesn’t mean you can’t shape the conversation and come into it with a set of questions and information you’re trying to get. And it’s very possible the conversation can go off the rails, and you’ll have to try and get it back on track. This can be very delicate, and it may feel awkward at first, but with practice you’ll develop a gentle but firm tone.

“You can get really hemmed in by the emotion of that interview. Sometimes you can allow someone to go on and on and on precisely because it’s cathartic for them…you’ve asked them a key question, and all of a sudden the floodgates open,” he said. “And so what becomes really important is to decide what you need from that interview.”

Phillip’s method is to gently interrupt and steer the conversation back to the material or topic that he has decided is pertinent to the story.

He adds that while you’re being empathetic, it doesn’t mean you can’t be a tough and incisive journalist.

“You have to empathize with people who are suffering,” Phillip said. “Even folks who may be of questionable character, if another aspect of their character is not questionable. If in fact you are able to see the complexity of that character. It’s not that you let any of these people off the hook, in terms of the answer you’re trying to get, and in terms of what they may have done or not done. But there is a degree of empathy that is absolutely important to infuse into these discussions.”