The fight for better pay in D.C. 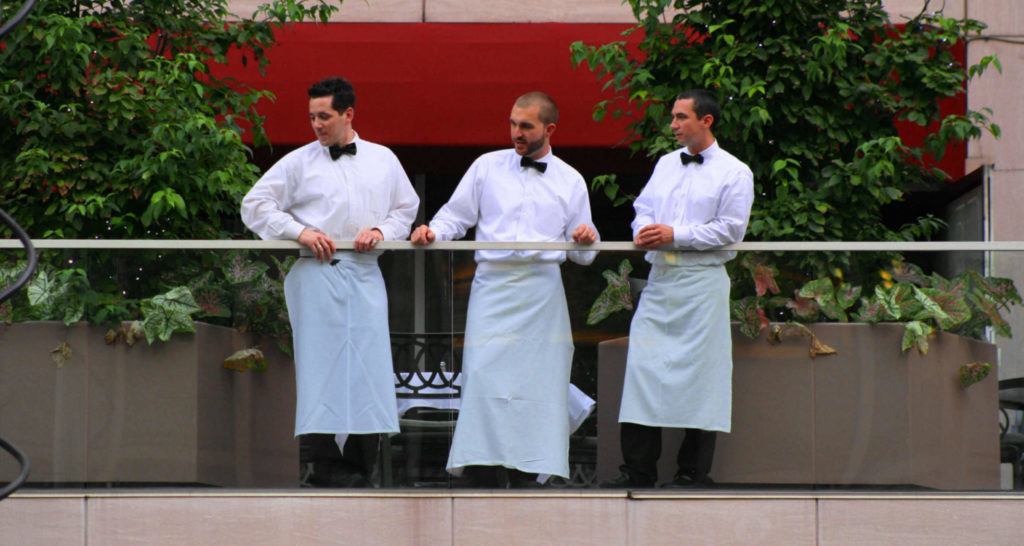 WASHINGTON –– Venorica Tucker has worked in the service industry since she was around 12 years old, when she got her first job selling concessions at the Arena Stage Theater.

Tucker, who will be celebrating her 70th birthday in October, said she can’t remember the exact number of positions she’s held since then, totaling it up to a “gazillion.” She has worked at hotels, conference centers and at the House of Representatives as a caterer. She once worked as a server for 66 cents an hour.

Tucker is involved in a fight over the minimum wage for workers who make a living primarily from tips here in the nation’s capital.  In June, D.C. voters narrowly approved Initiative 77, which would raise the “tipped minimum wage” from $3.33 per hour to $15. By 2020, the minimum wage for servers, bartenders and similar jobs working for tips would be the same as for non-tipped workers.

Minimum wage movements like this one have faced backlash across the country from the National Restaurant Association, which argues raising the wage will mean job cuts and the loss of businesses. In Washington, the movement is opposed by Congressional Republicans as well as City Council Chairman Phil Mendelson and Mayor Muriel Bowser, who are Democrats.

Seven out of the 13 City Council members this week quietly introduced a bill to repeal the initiative. In addition, two members of the House of Representatives added an amendment onto the 2019 House spending bill that would ban the use of federal funds for Initiative 77. As opposition builds, proponents fear Initiative 77 will die before it has ever been enacted.

“They’re opposing because it’s a lucrative business,” says Tucker. “People are making money. If they can shorten what you get, they can increase what they get.”

Critics like Mendelson argue raising the tipped minimum wage will put establishments out of business or force job cuts so owners can afford to pay their employees.

David Cooper, an economist at the Economic Policy Institute, said this argument doesn’t hold up.

“This is not some radical new policy. There are seven states, eight if you include Hawaii, where this is already the law of the land,” Cooper said. “The industry has found ways to operate in this type of system elsewhere. There’s no reason why they can’t adopt those same strategies in D.C., they just don’t want to.”

A 2014 study by UMass Amherst economist Arin Dube found that raising the minimum wage can directly reduce poverty. Most states have minimum wages that are less than the average amount it takes to rent a two-bedroom home. Increasing the minimum wage, tipped or not, can have a direct effect of an individual or families’ well-being.

For businesses, Cooper has found that when wages increase, well-run businesses last, and poorly managed ones do not.

“When you set a higher minimum wage, it can lead to an increase in business closures. However, it also leads to new business openings,” he said.

Cooper cited a Harvard University study in which, using Yelp reviews, researchers found that higher-rated businesses were less affected by minimum wage raises in the Bay Area than lower-rated ones. The study determined that “a one dollar increase in the minimum wage leads to a 14 percent increase in the likelihood of exit for a 3.5-star restaurant (which is the median rating on Yelp), but has no discernible impact for a 5-star restaurant (on a 1 to 5 star scale).”

Those who work in minimum wage positions have to live in urban areas like the District, which suffer from rising rent prices and cater to higher incomes.

“Maybe you can qualify for a mortgage now,” says Diana Ramirez, co-director at ROC United. “It will empower families.”

Advocates argue that a reliance on tips can create a power imbalance between customers and staff, and possibly foster an environment for harassment.

Employees can be snubbed on tips due to prejudice against their race or class, or simply because a customer did not want to tip or did not have enough money to. With the new initiative, the guaranteed minimum wage could give agency and stability back to tipped employees.

Whatever the outcome, other cities and states will be watching the capital.

Meanwhile ROC United is supporting other wage movements across the country.  In Michigan, it hopes to raise the tipped minimum wage to $12. Ramirez notes that the Michigan campaign includes a larger coalition of supporters.

“In D.C., it was the restaurant organizations coming after a nonprofit,” says Ramirez. “It will be an easier fight [in Michigan], but a bigger fight.”

The battle for Initiative 77 is not over yet. ROC United continues to challenge the City Council on its effort to repeal, tweeting, “Why vote if someone can just come in and nullify it?”

The House Appropriations Committee will decide on the amendment that would strip funding from the initiative on July 16. The City Council will vote on its repeal bill in September, when its two-month recess ends.