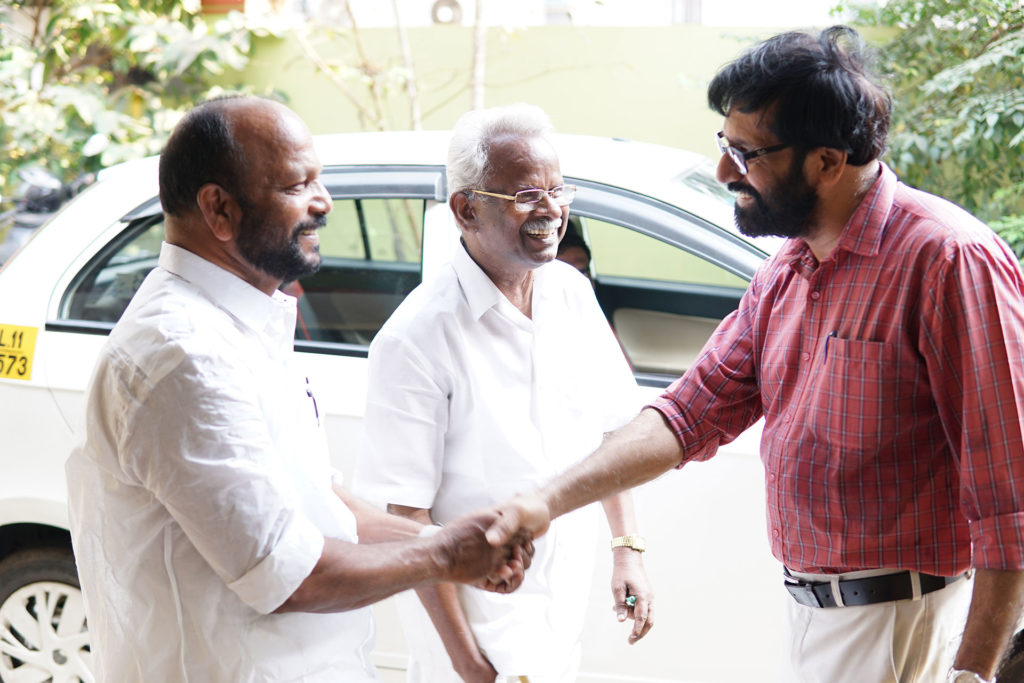 KOZHIKODE, India — When K.P. Ramanunni won the Sahitya Academy Award in fiction last February, his career as a novelist came full circle. The 64-year-old had received the same honor, the highest recognition for Malayalam literature in the Indian state of Kerala, over twenty years earlier for his first book, “What the Sufi Said.” In between, he quit his banking job to become a full-time author. He also helped adapt the “Sufi” novel into a film.

A practicing Hindu, Ramanunni’s writing grapples with religious and political themes, based on the traditions of interfaith harmony and social egalitarianism in cosmopolitan Kerala.

His latest novel, a science-fiction fantasy epic, imagines the Prophet Muhammad and the Hindu god Krishna as friends travelling through time to prevent an apocalypse. When the Sahitya Academy announced its award for “Daivathinte Pusthakam” (“God’s Own Book”), Ramanunni knew what he wanted to do with the 100,000-rupee prize. He kept three rupees for himself and gave the rest to the family of Junaid Khan.

The previous summer, the sixteen-year-old Muslim boy was killed on a train outside of Delhi. Reportedly, Khan and his brothers were returning to their village after shopping for Eid, the celebration marking the end of the holy month of Ramadan. A group of older Hindu men started harassing the brothers, accusing them of transporting beef, in violation of that state’s ban on cow slaughter. No meat of any kind was found in the boys’ bags. In the ensuing melee, Khan was stabbed to death and died in his brother’s arms.

“Junaid was killed only because he was a Muslim. He had done nothing wrong,” Ramanunni said. “Junaid wasn’t just killed that day. Hindu dharma was killed.”

A difficult Sanskrit word to translate, “dharma” blends “personal duty” with “civic responsibility.” As a public figure, Ramanunni has made his dharma to reclaim Hinduism from the far-right politicians he feels have distorted this peaceful faith in an effort to polarize India, fostering discrimination against non-Hindus, women and the poor. He also exhorts the secular left in his Marxist-led state of Kerala to acknowledge something it rarely does —religion’s power to unite and to inspire people.

“Religion is a lot like literature,” Ramanunni said. “It is the world of imagination. You just can’t ignore that part of humanity.”

Junaid Khan isn’t the only recent victim of faith-based violence. Hate crimes against Muslims and other religious minorities in the Hindu-majority nation have risen steadily since the conservative Bharatiya Janata Party’s victory in the 2014 elections, according to data tracked by IndiaSpend. Though the BJP’s public platform is to support a unified India for everyone, their association with extremist organizations and their reluctance to condemn acts of communal violence have drawn comparisons to the U.S. Republican Party’s flirtations with white nationalism under Donald Trump. Close to 900 million Indians are expected to vote in the general election this April. Viewing BJP Prime Minister Narendra Modi as a divisive figure, The Economist recently dubbed the 2019 elections “a struggle for India’s soul.”

Like the United States, India has no shortage of writers and artists speaking out against the potential threat of fascism. But according to Sunita Viswanath, co-founder of Sadhana, a New York-based organization advocating for social justice causes from the perspective of Hinduism, K.P. Ramanunni is one of the few framing his critique within an explicitly Hindu perspective. “In his work, his literary and advocacy, the way he lives his life, Ramanunni stands for unity for all,” Viswanath said in a phone interview. “He adds a Hindu voice of conscience to the movement.”

In India, progressive Hindus face a similar problem to liberal Christians in the U.S. In both countries, a “religious right” has dominated the public discourse around their respective traditions in recent years. Articulating a faith-based view for social justice invites skepticism, if not ridicule, from potential allies. “As liberals,” Viswanath said, “we are own worst enemies.”

To combat “Hindutva” — a nationalist, hyper-masculine interpretation of Indian culture — Viswanath says that “more Hindus need to step up” as Ramanunni has done.

In January of 2018, Junaid Khan’s murder was topped by a more heinous crime in the northern state of Jammu and Kashmir. A group of Hindu men, including a temple priest, were accused of kidnapping, gang raping and killing an eight-year-old Muslim girl in the town of Kathua. The Hindus’ alleged “motive” was to frighten the girl’s nomadic Muslim community from the area.

Though the incident happened in a state on the opposite end of the country, Ramanunni felt all Hindus should atone for the sins of these men. Last June, he announced he would visit a temple in Kerala and roll on the floor in a “pradakshina,” a ceremonial movement of circling a deity or holy site, as an act of supplication.

Ramanunni invited other Hindus to join him. Instead, he was met by a BJP-affiliated youth group, who tried to block his entry to the temple. India had already been rocked by nationwide protests over Kathua — many of which supported the accused and suggested a pro-Muslim conspiracy to obscure the facts. Ramanunni’s counter-protesters told him he was denigrating Hindus by drawing attention to something they believed to be fake news.

It was the men in Kathua who had denigrated Hinduism, Ramanunni replied. “They asked me why I did not object to similar atrocities against Hindus by Christians and other religions. I said that’s not my business. When Hindus do it, it’s my religion.”

At the Hotel Alakapuri, where Ramanunni shared most of these recollections in March of this year, everyone seemed to know him, from the dining hall staff to local newspaper reporters. Though the author lives with his wife a thirty-minute drive away, his tall frame and bearded smile were recognizable in this part of Kozhikode, a city of three million on the central coast of Kerala. Every winter, a literary festival is held at nearby Calicut Beach, and Ramanunni is often invited to speak.

Since the temple penance, he has been more visible in the political sphere and on Indian television. He stopped the interview for five minutes to record a political ad in the hotel courtyard, endorsing Pradeep Kumar, a communist running for a parliament seat in the upcoming elections.

Kerala’s political makeup is unusual, even by India’s byzantine standards with its numerous parties, sub-parties and cross-party alliances. The state produced the Eastern world’s first democratically-elected communist government in 1957. (The Mediterranean microstate of San Marino had one a decade earlier.) The Left Democratic Front, a coalition of communist and other groups in Kerala, retains current control of the state’s government, having battled back  and forth with the moderate Congress Party and its United Democratic Front for most of the last sixty years.

Ramanunni insisted he would never run for office himself. He hopes to shape the political world from the outside. “When you become a member of a party, your freedom is lost. You have to support their wrongdoings and keep silent when you disagree with them.” By remaining on the sidelines, he can freely criticize the communists, though he often supports them.

Marx may have described religion as “the opiate of the masses,” but for Ramanunni, Hinduism aligns well with socialist pursuit of equality for all. The atheists of Stalinist Russia failed to understand Marx’s later writings, which were more sympathetic to spiritual sentiment, Ramanunni said. Indian communists tend to reflect the nation’s religious diversity, with Hindus, Christians, Muslims and atheists all within their ranks. But publicly, Kerala’s ruling party promotes secular ideals and uses non-religious rhetoric.

“The communists need to start speaking the language of religious believers,” Ramanunni said, fearing that more Hindu voters will become confused and turn to right-wing politicians and their frequent displays of piety, whether genuine or not, in the April elections.

Even the Congress Party has invited Ramanunni to speak at their events. “I tell them my stand,” he said. Their problem, he said, started back when Jawaharlal Nehru, India’s first prime minister, fell in love with Western philosophy and forgot the “core values of Hinduism” that helped Mahatma Gandhi mastermind the Indian revolution and draw so many people toward him.

Yet, even in Kerala, where the BJP has long been the odd one out in the power-jockeying between the communists and the Congress, the Hindutva movement could be gaining ground.

After India’s Supreme Court ruled that women of menstruating age could enter Kerala’s historic Sabarimala Temple, where they had been previously barred, the BJP had a “golden opportunity” to sow discord among religious devotees who wanted to preserve the temple’s tradition, according to Anil Kumar, a communist party leader from Kochi.

Kumar applauded Ramanunni’s efforts to thwart religious intolerance and fundamentalism. “He is very courageously taking it to [the Right],” Kumar said. “He was bound to be attacked,” he added.

Threats have been made on Ramanunni’s life, and he has dealt with the vitriol of social media. Still, he asked the communist government to stop giving him police protection after the uproar over his Kathua protest died down. “It became too hard to move around freely,” he said.

For Ramanunni, the relationship of faith and activism is clear. “We have to get back to the Hindu religion of Mahatma Gandhi,” he said, contrasting the freedom fighter’s pluralistic values with the Hindu hardliners who engineered his assassination.

Ramanunni is not alone. A group with communist party support, the Kerala Sanskritam Sangham, meaning “Sanskrit Assembly,” helped organize his temple penance. Last summer, they also staged readings and scholarly discussions of “The Ramayana” to combat the Hindu epic’s misappropriation by Modi and other nationalist politicians. “They are exploiting unsuspicious believers by misusing the verses of these great classics. Our attempt is to contest this,” T. Tilakaraj, a Sangham leader, told India’s The Week.

Yet, Ramanunni doubts if more authors will join his cause. “Other writers are hesitant to come to this controversial field or are confined to not addressing religion,” he said.

If Hindutva successfully works its way into an open-minded place like Kerala, the rest of India is doomed, according to the novelist.

“Religious division will spoil this earth.”