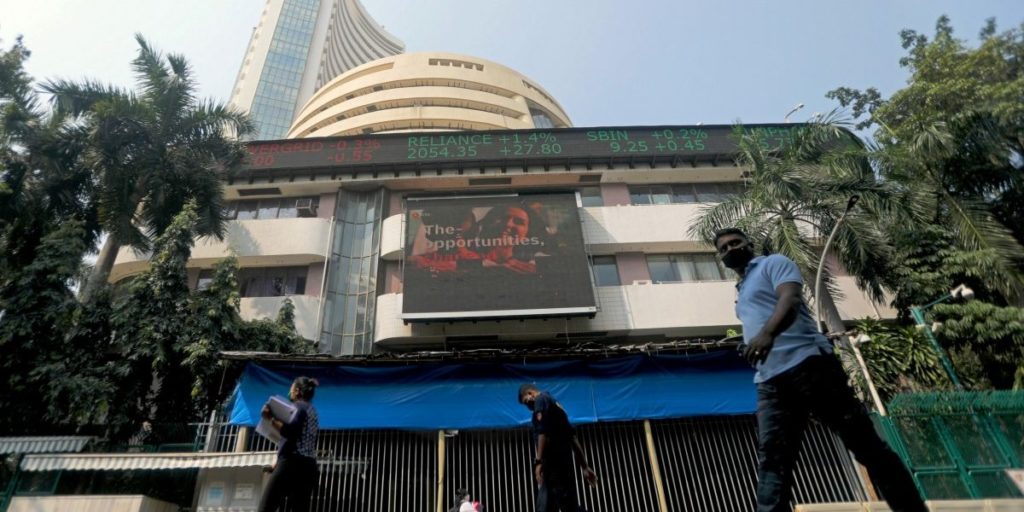 Mumbai: If you are a retail investor who is given to bouts of panic, this might not be the best time to check the status of your mutual funds and portfolio.

Alternatively, if you are a retail investor who believes that India’s growth story is still intact, no matter the dampening inflation, then this might be the time for you to step up your market investments.

Whichever camp you belong to, that there is bloodbath on Dalal Street is beyond doubt. On June 15, Federal Reserve Chairman Jerome Powell delivered a 75 basis point interest rate hike – the largest in three decades – generating murmurs of an imminent recession.

In India, the bourses have been crumbling as foreign institutional investors or FIIs look to exit the market in droves attesting, in a way, the age-old maxim of the world catching a cold when the US sneezes.

Domestic institutional investors or DIIs, however, have consistently remained strong buyers of Indian equities, partly making up for huge FII outflows, even as the fresh inflows via the systematic investment plan or SIP route have fallen marginally. They have invested a total of Rs 66,000 crore in FY23 thus far, after putting in nearly Rs 2.2 lakh crore in FY22. In fact, May 2022 marked the 15th consecutive month of net buying by DIIs. 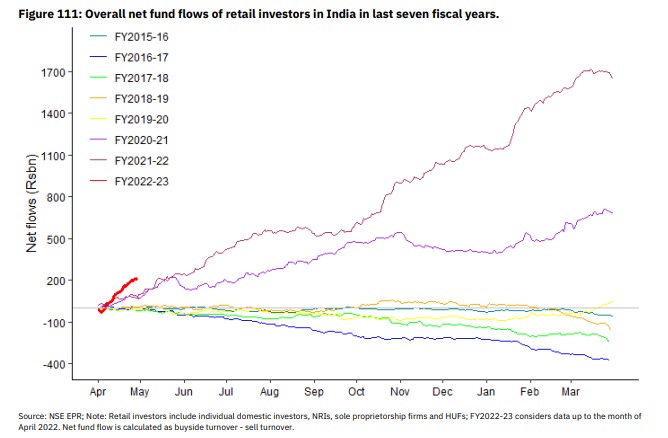 One can gauge the retail investors’ appetite for the markets from the fact that direct investments by them in FY22 ballooned to Rs 1.64 lakh crore, which is nearly 2.5 times the net inflows during FY21.

For now, the outlook remains foreboding and ominous.

Fed Chair Powell’s decision to hike the interest rate will likely trigger another exodus of capital from the equity markets to the safe havens of US treasury bonds and gold. Chair Powell said in so many words that coming interest rate hikes will be dependent on the data emanating from the ground and the policy will pivot around bringing inflation back within the 2% range.

“We anticipate that ongoing rate increases will be appropriate; the pace of those changes will continue to depend on the incoming data and the evolving outlook for the economy. Clearly, today’s 75 basis point increase is an unusually large one, and I do not expect moves of this size to be common. From the perspective of today, either a 50 or 75 basis point increase seems most likely at our next meeting. We will, however, make our decisions meeting by meeting, and we will continue to communicate our thinking as clearly as we can. Our overarching focus is using our tools to bring inflation back down to our 2% goal and to keep longer term inflation expectations well anchored.” Chair Powell said.

There’s no escaping the heat of inflation, be it one running rampant in the US or in India.

Recurrent invocations of different inflation figures under its large taxonomy will roll off your memory but the existential bite of expenses is likely to linger for long. Inflationary pressures on food articles as well as natural gas, crude oil, minerals and power segment were visible in the wholesale and retail price indices.

The Wholesale Price-based Inflation (WPI) for the month of May stood undented in double figures for the 14th consecutive month. In May, the WPI inflation also continued its upward march for the third consecutive month surging to a whopping 15.88%.

Seen in the fine print, the CPI figures for all the six groupings under the CPI witnessed a sequential increase. Beyond the statistical onslaught, the reader would be aggrieved to know that year-on-year inflation for vegetables spiked up to 18.3% from 15.4% in May 2021 led by a sharp price rise in tomatoes, potatoes, pear and cauliflower.

Additionally, prices of meat and fish and milk products hardened as well in May compared to April this year, reflecting the impact of extreme weather conditions in different parts of the country. As per ICRA, the food and beverage index rose by a strong 1.5% with a broad-base increase in nine of the 12 sub-groups, which include, spices, vegetables, meat and fish.

Price pressures eased off a bit on certain select commodities primarily because of the Indian government’s decision to place a ban on the export of wheat and sugar. This had the effect of scuttling large leap increases in the prices of wheat and sugar. Additionally, duty-free import of crude varieties of edible oil also contributed to the prices of edible oil remaining relatively stable compared to the month of April. However, the going forward will be dictated by weather conditions across the country and the impact of the monsoon.

Meanwhile, frustrating India’s attempt to tame inflation is rising international crude oil prices which breached the $120 per barrel mark (Indian basket) on June 9. Growing demand from the Chinese economy and rising supply from Russia despite fresh sanctions by European Union countries on Russian oil are spearheading the undesirable yet inevitable rise in crude oil prices.

If the upward bias of international crude oil prices continues unabated, it will only add to the government’s bill of excise duty cut, leading to a situation where higher crude oil prices will render the excise cuts meaningless.