Far From Home: A brief history of Central American immigration to the US (VIDEO) 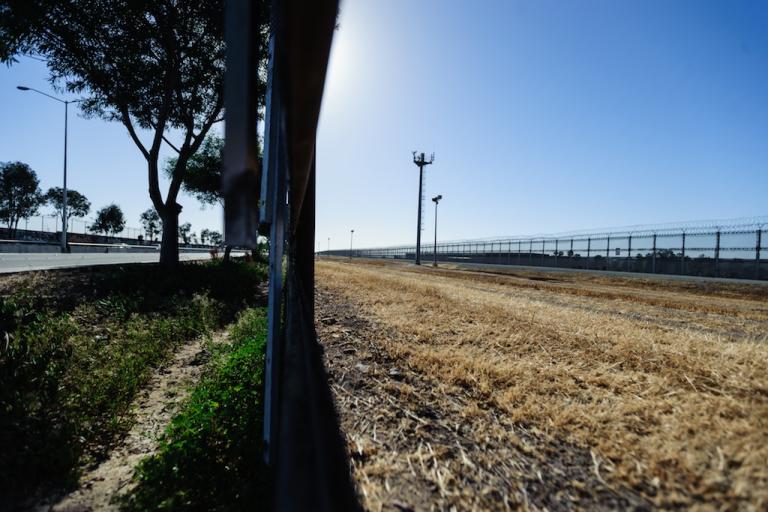 The border between Mexico (left) and the United States (right), seen through a gap in the wall on the Mexican side near Tijuana. In 2014, more than 68,000 Central American children were detained at U.S. borders, many of them fleeing the violence and poverty in Honduras, Guatemala and El Salvador. - ((Charlie Magovern) )

LOS ANGELES — Reading the headlines and political declarations booming from America’s southern border last summer, one could imagine the nation was under mortal siege.

Then-Texas Gov. Rick Perry demanded military troops be rushed to the border. Georgia Rep. Phil Gingrey warned that invaders might be carrying an Ebola epidemic across the border. CNN warned of “an invasion.”

There were no enemy troops trampling across what is a heavily armed, if not militarized, US border.

These “invaders” were, in fact, tens of thousands of children. Many walked unaccompanied, sometimes with a mother or adult relative, peacefully turning themselves into Border Patrol agents if confronted. More than 68,500 such unaccompanied kids were detained in fiscal year 2014, the Congressional Research Service reported.

Most were fleeing gang violence and economic devastation in Central America, seeking shelter or reunification with family members in the US or a whole new life. The spike of humanity, fueled by rumors that President Obama had opened the border to migrants, completely overwhelmed the local and national immigration infrastructure and the federal government rushed to stand up detention centers to hold the new arrivals.

Soon Obama declared the humanitarian crisis a “national emergency,” launching a surge of deportations challenged by squads of volunteer lawyers. A “second wave” of perhaps of 40,000 more unaccompanied minors was projected during the first half of this year. However, an analysis by the Pew Research Center in Washington indicates those numbers are suppressed because Mexico, under pressure from the US, has stepped up law enforcement in its southern region. The newcomers represent a relatively small fraction of the millions of Central Americans later who have come to the US since the late 1970s, when US intervention intertwined with military dictatorships, untethered death squads and armed resistance that inundated the isthmus of Central America in a flood of death and misery that has yet to abate.

Honduras remains the murder capital of the world. Notorious gangs, in great part exported from the streets of Los Angeles, are responsible for horrendous violence in San Salvador. Violence engulfs Guatemala as well, and all three countries face a combination of chronic poverty and political turbulence that forces flight to safer ground.

“Unaccompanied children have been crossing the border for years,” said Neils Frenzen, an immigration lawyer and director of the University of Southern California Immigration Clinic. He is currently representing four minors in a Los Angeles immigrant court who crossed during the most recent surge.

Cases like these have cast harsh light upon a dysfunctional immigration system at a time when comprehensive immigration reform is a battered political football. Every recent Democratic president has promised an overhaul and has failed to deliver. In 2004, Republican George W. Bush proposed sweeping reform, a cause championed by Sen. John McCain, until he ran into fierce and insurmountable resistance from his own party.

When Democrats took the White House in 2008, McCain was already on the other side of the issue. Earlier this year he pushed a measure that would have accelerated the deportation of unaccompanied minors but was blocked, this time by Democratic opposition.

None of this drama of the past year has fazed 69-year-old Eliseo Medina, who has spent the near entirety of his life in the storm of immigration politics.

“Coming to America is a place where you can work hard and make a home for yourself but it is also a place of safety,” says Medina, a veteran Mexican-born union organizer, immigration advocate and a former lieutenant to Cesar Chavez. Medina immigrated here legally when he was 10 years old. “It is a place you might have friends or families who came before you. (America) became a very natural place for people to send their children.”

He started working for the United Farm Workers in 1966 after he met Chavez and was considered by many to be his successor. Eventually, he joined the powerful Service Employees International (SEIU) in 1968 where he eventually rose to the post of international vice president. After retiring from the union, he now works full time on immigration reform.

“The immigration system has been broken, this is not new, this is has been going on for, God, decades,” said Medina.

As a young boy, Medina watched his father participate in the guest worker program, when workers were brought to the US during World War II to work in agriculture on a one-year contract with no real labor or legal rights.

In 1956, Medina’s father legally moved his family to Delano, California. He, like many other immigrants, quit school after the eighth grade to work on the family farm. No questions were asked.

“My family needed me so I left school,” he said.

Overtime, this outlook has changed. Though many immigrant children still drop out of school or never attend, many undocumented minors stay in school and become professionals.

“Expectations for us have changed as well, you see a lot of Latinos going to college, and getting an education,” said Medina. “It becomes clear that there are more options than picking grapes and oranges; you can do more.”

There were also expectations that the immigration system was actually in for some serious reform.

In March 2006, after reform measures failed, Congress prepared to crack down on illegal immigrants by building a large security wall along the US-Mexico border and creating harsher laws that would penalize anyone who helped immigrants cross.

In protest, over a million people marched in over 160 cities. The largest demonstration was in Los Angeles, where over 500,000 people joined together to march peacefully. According to a Los Angeles Times piece published that week, demonstrators wore white shirts to “symbolize peace, (and) included both longtime residents and the newly arrived, bound by a desire for a better life.”

Protests such as those in L.A. occurred all across the nation. It was during these marches that the “DREAMers” — undocumented students including valedictorians and straight-A students with dreams of college and jobs — emerged.

Medina says that this was significant because it was the first time immigrants had mobilized throughout the country in such great numbers.

“It told the Latino community: We are not alone, we have power, we can and will be heard and a sense of unity that had never been present before,” he said. “Before we had been Colombian or Mexican but then we became Latino. And for the public at large, for the first time they saw the face of the immigrants.”

It also showed the public the face of the DREAMers, who came out in droves to call for reform.

Marches or group gatherings about immigration reform did not stop in 2006. A newly elected President Obama promised comprehensive reform when he took office in 2009.  And while almost all reform measures have never made it out of Congress, a first real break through came in 2012 when the president used his executive power to broaden what is called Deferred Action for Childhood Arrivals (DACA) program.

While not conferring legal status, DACA blocks deportation and issues a temporary work permit to about 1.2 million young immigrants who came to the US as children and are enrolled in or have completed school.

Medina remains confident that the growing political importance of the Latino vote — needed by either party to win a national election — makes immigration reform inevitable, no matter how bumpy the road.

“The conversation has changed from the politicians making the decisions to their political future coming into question unless they fixed the immigration system,” says Medina.

Medina explained that there is a growing recognition in the States that the country depends on immigrants coming in to the country to do jobs, often jobs that other people do not want to do. Forcing politicians to acknowledge that was an important step in immigration reform.

While Mexico is apprehending more unaccompanied minors heading north from Central America and there are reports of numbers dropping , others are still anticipating a “second wave” of thousands of migrants.

Meanwhile, the immigration issue remains front and center as the 2016 presidential election cycle revs up.

Last November, Obama rocked the political landscape when he used his executive power to decree a basketful of administrative measures that could shelter as many as half of the estimated 11 million undocumented immigrants in the US from deportation.

Obama’s move was a far cry from comprehensive reform and it will not affect the status of new unaccompanied minors coming to the border, but it was the first time in nearly 30 years that the federal government took such a bold step toward reform.

The Republican reaction was immediate and severe, accusing the president of stepping outside the law and beyond his authority.

With Republicans now controlling both houses of Congress, there is not only no short-term perspective for sweeping immigration reform, there is instead a possibility that Congress will undermine or roll back the few steps forward taken by Obama.

When the new Congress convened earlier this year, its first act wasa dramatic but ultimately unsuccessful attempt to defund the Obama administration’s measures by cutting a portion of funding to the Department of Homeland Security, the agency that oversees immigration policy.  The ploy failed only because it would have caused a shutdown of the entire government.

However, Medina said he is still optimistic. He believes that in the next four years, immigration reform policies will be passed.

“I think there is going to be an even stronger civil war within the Republican Party when they come to the realization that survival is more important and they’ll pass immigration policy and work to rebuild relationships with Latinos,” he said. “This will make for a much stronger democracy for the future.”

Meanwhile, most of the unaccompanied minors that made headlines last year are now out of federal detention and living with a relative in the US. That does not mean they are home free. Most remain in a bizarre legal limbo. They have all been given dates to appear in immigration court.

The youth are not guaranteed right to legal counsel and almost 90 percent of those who go into court without representation are ordered deported. The figure reverses itself for those who go in with a lawyer.  Traditionally, large numbers of immigrants never make their court date, preferring to live in uncertainty rather than face certain deportation.

Immigration and Customs Enforcement (ICE) gives no exact number of youth deported from last year’s wave. Just under 2,000 minors were deported in 2014 but an unknown number of those might be have been pending from previous years.

Reform advocates were stunned, nevertheless, this part March when federal documents surfaced showing that more than 7,000 of the unaccompanied minors were ordered to be deported, allegedly without ever being informed of their court dates.

Children’s advocates blame a broken immigration court system as well as measures by the Obama administration to fast-track the deportation hearings down to a matter of weeks instead of years. In all the hustle and bustle, the advocates say, proper notification of the minors has gotten lost.

Wendy Young, president of advocacy group Kids in Need of Defense, said, “What was a border crisis has now become a due process crisis.”