As faithful celebrate Easter, Passover in Jerusalem, the city braces for the US embassy’s relocation 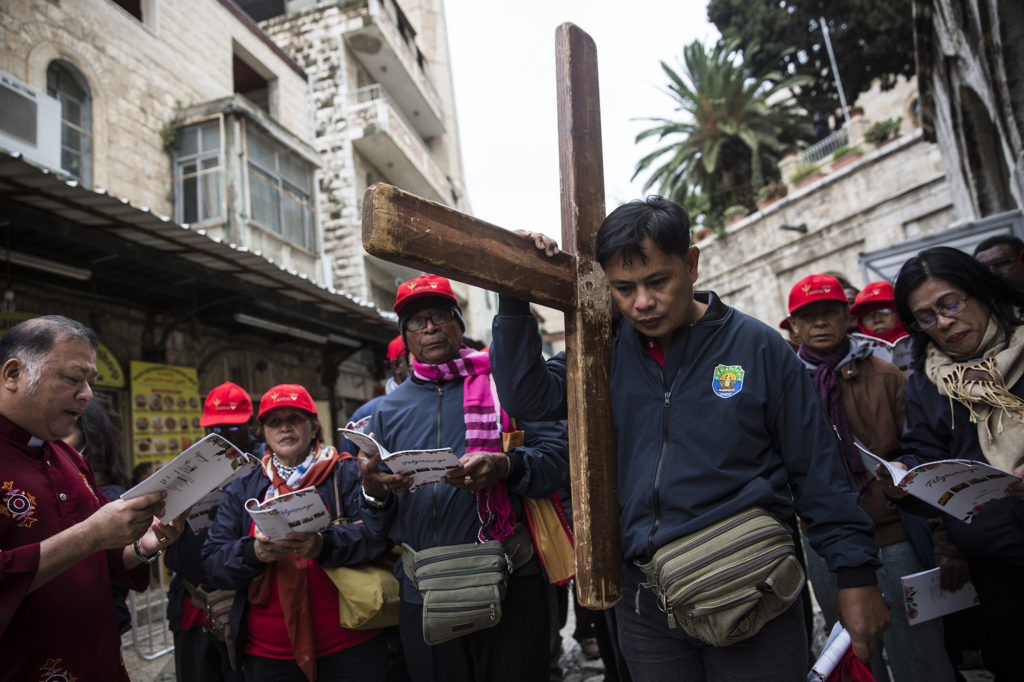 Christian worshippers from around the world along the Via Dolorosa as they walk towards the Church of the Holy Sepulchre on Good Friday, March 30, 2018, in Jerusalem's Old City. Christians believe it to be the site of the crucifixion of Jesus Christ. (Heidi Levine/The GroundTruth Project)

JERUSALEM – A cold, persistent rain fell on the ancient Roman paving stones of the Old City here, making the processions of followers of the three Abrahamic faiths – Jews, Muslims and Christians — a bit more challenging today.

In the Jewish quarter, families huddled under umbrellas and stepped carefully across the slippery stones and past the Western Wall as they rushed to get ready for the Passover observance tonight when Jews will remember the Biblical Exodus and reflect on the meaning of deliverance out of Egypt.

Christians from as close as the Palestinian neighborhoods of Jerusalem and the town of Bethlehem and as far away as Indonesia and the Ivory Coast carried on with their somber Good Friday processions along the Via Dolorosa, or “The Way of Sorrow” which tradition holds is the path of Jesus as he carried the cross to his crucifixion.

And Muslims with prayer rugs tucked neatly under their arms and collars turned up against the rain hustled through the narrow alleys of the Old City for Friday prayers at the Al Aqsa mosque in the overlapping sacred space of Jerusalem.

Jerusalem is indeed a city where three faiths come together, but it is also bracing for a big – and what many fear may be a divisive – moment next month when the U.S. embassy will move from Tel Aviv to West Jerusalem. In doing so, the U.S. will break with decades of diplomatic tradition by recognizing Jerusalem as Israel’s capital. The final borders of Jerusalem and the determination of it as a capital has long been held as an issue to be determined in the so-called “final status” of long-stalled peace negotiations between Israelis and Palestinians.

For Palestinian Christians and Muslims this move by the Trump administration is yet another tragedy in their history, and one that is causing many to lose hope of their national dreams and aspirations for a Palestinian state with its own capital in East Jerusalem.

That despair erupted into violence along the border fence in Gaza. Palestinians were holding a day of protests to commemorate Land Day, the day in 1976 when Israeli security forces shot dead six Israeli Arabs who were protesting the state’s seizure of land owned by Arabs.

Israeli soldiers responded to today’s demonstrations with force, to stop Palestinians from breaching the thick cordon of barbed wire and blast walls. The barrier keeps nearly two million Palestinians holed up inside of the thin strip of land that is among the most densely populated polities in the world. At least 15 Palestinians were killed in the clashes and hundreds more were reportedly wounded.

Amid the two conflicting, nationalistic narratives of Israelis and Palestinians, one group, Christian Zionists, have played an increasingly prominent role in the U.S. in recent years. They’ve pushed for the U.S. embassy to be moved from Tel Aviv to Jerusalem, and for the U.S. to recognize Jerusalem as Israel’s capital. Christian Zionists have become a growing force in Israel – and in the far-right Republican circles in the United States — as many adherents to this evangelical expression of Christianity are donating money and holding fundraisers that are bringing in tens of millions of dollars a year to support Israel, particularly to support stepped up immigration of more Jews to Israel.

Christian Zionists believe that the state of Israel and the return of Jews to the Holy Land is in accordance with Biblical prophecy, and that it sets the world on course for an apocalyptic battle that will set the stage for the return of Jesus as the Messiah. Most mainstream Catholic and Protestant churches have rejected this view of theology as dangerous and misguided, and have warned against it as a modern political expression and not sound theology. Many Jewish theologians and thinkers have also rejected Christian Zionism as a theology that in its core is anti-Semitic because of it imagines a final reckoning in which Jews will have to convert to Christianity or go to hell.

But over the last 10 to 20 years, the Christian Zionist movement has become more mainstream, particularly here in Israel. Fundraising from American evangelicals has become an important source of support for Israel, particularly for settling Jewish immigrants to Israel in a demographic struggle and in shoring up Israel’s hold on Jerusalem as its capital. Prime Minister Benjamin Netanyahu is a strong supporter of Christian Zionism, as are many other members of the right-leaning Likud Party. They have found common cause with the far-right members of the Trump administration, particularly Vice President Mike Pence.

Rev. Mitri Raheb is a Palestinian Christian pastor of the Lutheran Church and the president and founder of the new Dar Al-Kalima University College of Art and Culture in Bethlehem in the West Bank, and he believes the U.S. decision to move the embassy will have long-lasting repercussions.

“Jerusalem should be for two peoples and three religions. If you give Jerusalem to one people against the other, to one religion against two others, actually you are defying the identify of this city. And you are actually destroying its symbolism because Jerusalem is a city of peace,” said Raheb.

Others would strongly disagree. Inside the Friends of Zion Museum, which is dedicated to Christian Zionism and its history of supporting Israel, a Jewish family from New York were to celebrate the Passover holiday with family and were discussing the movement of the embassy. They had a very different take, believing that Israel will be the best steward of the holy city, and will continue to ensure that all faiths are able to worship there.

“Frankly, it’s about time,” said Shalom Maidenbaum, the managing partner of a law firm in Cedarhurst, New York, referring to the decision by Washington to recognize Jerusalem as Israel’s capital. He said it will be good for the unique role the city please as a sacred space for the three Abrahamic faiths.

“Everybody’s welcome here, but who would you trust to be the keeper of the faith? The one religion that hasn’t persecuted any other religion throughout the ages? Or the two other religions who have a very checkered past when it comes to other people? So I’d go with the one that has the better history, which is the Jewish religion,” added Maidenbaum.