‘I have faith this country will keep their doors open’ 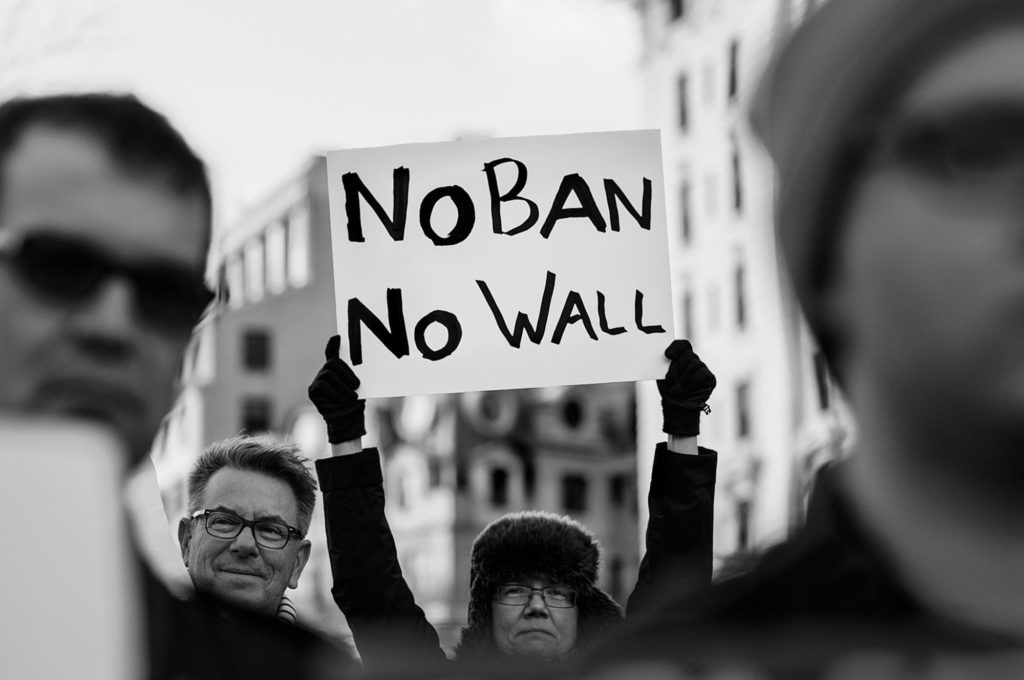 A protester holds up a sign that reads, "No ban, no wall" at a rally against President Trump's "Muslim Ban" on Jan. 26, 2017. (Photo by Lorie Shaull/Wikimedia Commons)

The day I heard about Trump’s immigration ban, I spent most of the morning on Google Maps’ satellite view, looking at Ibtisam Masto’s new home in Cincinnati, Ohio. It’s a long way from the one she left behind four years ago in war-torn Idlib, Syria. I haven’t seen her since she resettled to the Midwest, and I wondered what things looked like from her bright, blue eyes. I wondered what she’d been up to in her new brick home with a red door on a tree-lined street.

In 2014, I had met Ibtisam thousands of miles away, in Beirut, not long after she had fled Idlib in a packed bus with her six children and husband. When shrapnel landed on her balcony one cold Syrian afternoon, just narrowly missing her three-year-old son, she knew it was time to leave.

So, they left. Everything. She left her beloved mazhar, an Arab tambourine-like instrument, back in Syria, along with her favorite gold-rimmed teacups and sepia-toned family portraits. She also left behind one of her favorite cooking pots, given to her by her aunt on her wedding day. “I feel like I’ve lost myself,” she told me one sunny February morning in 2014. Before fleeing Idlib, she had not even been out of her own city, much less the country. And while Lebanon and Syria share similar cultures, fast-paced Beirut — with its noisy streets and, at times, cosmopolitanism that borders on snobbery — was a huge transition.

“I’m staying strong for my kids and my husband,” she told me, tears streaming down her face at a Lebanese restaurant where she had found work — and a community — as a cook. Without proper access to medical care, her husband’s diabetes had deteriorated, leaving her as the sole caregiver for their kids.

I’ve had the pleasure of getting to know Ibtisam, mostly as she waded through purgatorial hell in Lebanon, trying to find a way out for her family. Lebanon now has the most refugees in the world per capita, its resources severely strained.

In the summer of 2016, I wrote an update for Lenny on Ibtisam’s journey. Since I had last seen her, in 2014, she had lost 35 pounds. She was so proud to show me her new waist — giggling and tapping on her hips like an excited schoolgirl. In addition to cooking, she had picked up a sales job at the LA-founded nutrition and direct-selling company Herbalife. She had also registered her family for asylum and relocation in America. In May 2016, she received news that her application had gone through to the next level.

“Do you think they’ll like me?” she hypothetically asked her fifteen-year-old daughter Asma, with a nervous laugh. Asma joined her at the market that Saturday to help sell her mom’s delicious food to impeccably dressed Beirutis. Like most Syrian youth, she hadn’t been to school for three years; there was simply no room for her in the local Lebanese high school. “I fear I have forgotten everything I learned in Syria,” she told me. “I feel like I’m no longer myself.”

Ibtisam always said that if she got the green light or “golden ticket” from UNHCR, the UN agency that resettles refugees, she’d pack up their small Beirut apartment in minutes and be on the next flight.

When she got the call one May day, it took more than a few minutes to pack up all of their stuff. In fact, once they got word that they would be relocated, it took a month or so to sift through all the papers. At first, they didn’t know where they were being sent. California? She had heard it’s sunny there. Michigan? She had heard there are a lot of Arabs there. When she found out that Cincinnati would be their new home, she looked at a map on Google and smiled. It was more than good enough.

The UNHCR helped them with the rent on their home. And her husband now has access to medication for his diabetes. Every morning, he crosses the nearby border to Kentucky, where he works at a fruit and vegetables shop.

While their new Ohio street could be the setting for a Hallmark postcard from Happy Suburbia, USA, life hasn’t been easy for Ibtisam. Her eighteen-year-old daughter, Amal, who had also been out of school since the family had fled four years ago, isn’t able to attend the local high school because she’s too old and too far behind. Her other five children are struggling to make friends. Every day, Ibtisam studies English for three hours at a nearby cultural center.

The woman from Idlib who could barely look me in the eyes three years ago and cowered in the corner of a Lebanese restaurant in dejection was writing in almost perfect English, putting my six years of on-and-off Arabic lessons to shame.

Over the past few months, I’ve watched her progress skyrocket over WhatsApp. The woman from Idlib who could barely look me in the eyes three years ago and cowered in the corner of a Lebanese restaurant in dejection was writing in almost perfect English, putting my six years of on-and-off Arabic lessons to shame.

Last month, “Chef Ibtisam” even sent me a promotional flyer for her new catering business — an extension of the Beirut program she participated in. She hopes to cater dinners within 90 miles of downtown Cincinnati. “Americans are going to love my kibbeh!” she exclaimed. Kibbeh are dough-like balls filled with minced meat and parsley and cooked in rich chili sauce. For the record: they are banging.

Food as art and love, as survival and memory. Food as resistance and healing. From nothing, something – everything. Ever since Ibtisam fled Syria with her family three years ago, food has been a lifeline, a prayer. Every Saturday, she and her daughter, Asma, sell their delicious Syrian fare at @soukeltayeb, Beirut’s premier farmer’s market. “This is a way for me to show others who I am and what Syria is,” she said as Lebanese foodies flocked to her delicious Kebbet Reheb, the small bulgur balls I’m about to inhale in this photo. They’re filled with minced meat and parsley, and doused in chili sauce. They melt in your mouth. I first tasted Ibtisam’s food two years ago. Back then, returning to Syria seemed like a reality. Now the thought seems naive. At some point, the threshold collapsed. Clinging to the past now hurts more than letting go. Her 15-year-old daughter has been out of school for almost four years now, her life perpetually stalled like millions of others. “We’re all just waiting,” Ibtisam said. “We cook, we wait. We cook, we hope.”

While Ibtisam says she hasn’t paid that much attention to politics, she grew worried after Trump was elected — worried for her place in a state where he won 51.3 percent of the vote (Hillary won 43 percent). She says her neighbors are “nice” but she doesn’t “see them much.” I can tell she hasn’t made many American friends. “I have faith, though, that this country will keep their doors open,” she told me. At least in Cincinnati, which Hillary won by an almost inverse margin as the state, Ibtisam says she feels welcome. But ever since shrapnel landed on her porch one cold afternoon in Syria, welcome has become relative.

On January 29th, a day after Trump signed the executive order effectively banning all refugees, I flew into my hometown of Philadelphia and joined hundreds in protest. A 23-year-old Syrian girl named Majd from Aleppo took the small mic and thanked the crowd for standing with Syrians. For many at the protest, it was the first time they had met someone from a country they had learned about only through horrific headlines. They all waited in line to hug her, their faces drenched in tears.

I posted a selfie of Majd and me, our hands locked in love and resistance. Ibtisam was the first person to comment, in almost perfect English. For the first time in weeks, my heart swelled. I noticed that on Facebook, she had started spelling her first name “Abtsam.” Abtsam and Ibtisam are two English spellings of her Arabic name. Because Arabic letters don’t always have a direct Latin-alphabet equivalent, spellings can vary. In other words, it was only until she was essentially forced to interact with English-speaking people that she had to think about how she wanted to spell her name in English — a new name for a new life.

If you want to help refugees like Ibtisam, have your Ohio-based friends order her awesome food! And if you don’t have any friends in Ohio, you can help sponsor a Syrian family who hasn’t been lucky enough to be relocated in America or Europe through the Karam Foundation. The founder is Lina Sergie-Attar, an awesome Chicago-based Syrian-American writer and architect who has worked tirelessly for Syrian youth.

A version of this story also appeared on LennyLetter on February 8, 2017