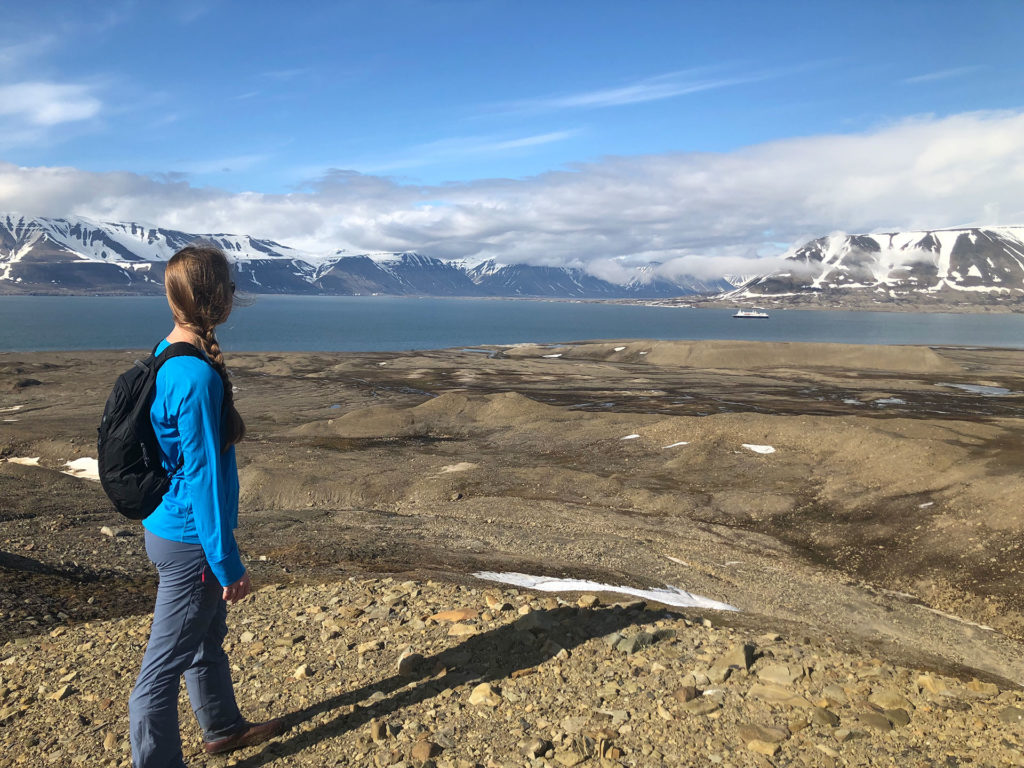 "The sun never set while I was in the Arctic." Emily Beagle, Ph.D., surveys the landscape in front of her in Svalbard, Norway (Photo by David Hone)

The sun never set while I was in the Arctic. Every night I stood on the deck of the ship to witness the midnight sun. I could feel its effect on my brain, a perpetual light signaling to my body that it was time to start the day even though I had yet to go to sleep. This feeling, coupled with a lack of internet and cell phone coverage — and the foreign, surreal landscapes of the Arctic — gave me a sense of stepping out of reality and into a waking dream. As a result, when the ‘real world’ presented itself, it felt rudely inserted, and more off-putting than normal.

I was on board the National Geographic Explorer along with other researchers and students from the University of Texas at Austin taking part in the ClimateForce 2019 expedition. As we first sailed out of Longyearbyen, Svalbard, and into the remoteness of the Arctic, I was expecting to leave all traces of civilization behind – to see only the stunning landscape and wildlife the polar region is known for. Instead, on the first afternoon of our one-week trip, we came to Pyramiden, an abandoned Russian coal mining town that remains just as it was left in 1998. While the town itself still has standing buildings, houses, and apartments, in addition to the mining infrastructure – it is very much a ghost town.

What struck me most about this unexpected reappearance of civilization was the reach of greed and demand for resources that it represented. And decades after the mine shut down, evidence of that appetite remains.

Human consumption and exploitation of natural resources continued to rear its head throughout the Arctic trip.

Nearly every day we had the opportunity to take Zodiac boats onshore to go hiking and explore the local tundra. Every beach we visited had plastic and other trash that had washed up onshore. Less visible but more impactful were the signs of climate change, largely due to man-made emissions of carbon dioxide. The polar regions are warming at twice the rate as the rest of the planet – the Arctic already has seen a 3.5 degree Fahrenheit temperature increase in the last 40 years, compared to 1.4 degrees globally. If these rising temperatures continue, it will be catastrophic for the region — and the planet.

That is why much of international climate policy has focused on reducing greenhouse gas emissions to keep Earth’s average temperatures to within 2 degrees Celsius (3.6 degrees F) of pre-industrial levels, a threshold over which scientists believe climate change would be severely damaging to our world.

There are many different pieces to solving the climate change puzzle but one that I am constantly thinking about in my own research on decarbonization strategies is the crucial role of carbon dioxide removal technologies to meet the necessary emission reduction targets.

Carbon dioxide is a cumulative problem. That means that it is the total amount that has been emitted and not the rate at which it is being emitted that determines the extent of temperature rise and other climate change impacts. Even if we were to completely stop releasing carbon dioxide into the atmosphere tomorrow, we are still going to see its impact because of the amount of carbon dioxide that is already in the atmosphere, the most recent measure of which is well over 400 parts per million. That is why carbon dioxide removal technologies are so important.

The oldest and easiest carbon dioxide removal technology is forestation – simply put: planting trees. Trees are really good at pulling carbon dioxide out of the air but the scale and timing of emission reductions necessary to meet climate targets warrants investigating other options. Other carbon removal technologies include carbon capture and storage (CCS), where the greenhouse gases emitted from burning fossil fuels at power plants is stored permanently underground; bioenergy with carbon capture and storage (BECCS), where carbon dioxide emissions from power plants using trees or crop wastes as fuel is stored in a similar way, and direct air capture (DAC), where carbon dioxide is removed directly from the air and also stored.

One of my concerns as a researcher in climate change mitigation strategies and carbon dioxide removal technologies is the political push to only consider the ‘poster child’ renewables, like wind and solar, in proposed energy policies and in the future energy system. There is this misconception that because technologies like CCS can be paired with fossil fuels like coal and natural gas, these technologies are somehow ‘bad’ or are being suggested only by proponents of extending a lifeline to fossil fuels.

This dismissal of technologies that are crucial to meeting our goal of keeping temperature rise below 2 degrees C could have devastating consequences. Solar and wind are important – but they can only get us so far. And in the meantime, we need to be putting our efforts into developing all of the tools and technologies available to us to reduce greenhouse gas emissions. The Arctic that I saw looks very different from what pictures show it looked like 30 years ago, and if steps aren’t taken now to address climate change, the glaciers, sea ice and wildlife that depend on them may not be around in another 30 years.

Emily Beagle, Ph.D. is the CLIR Postdoctoral Research Fellow in Data Curation for Energy Economics at the University of Texas at Austin. Her research interests include renewable energy deployment and integration with the grid, energy policy for emission reductions and energy economics.

This is the second in a series of posts from scientists, experts and artists detailing the impressions and insights they gathered on their trip to the Arctic, as part of ClimateForce 2019.