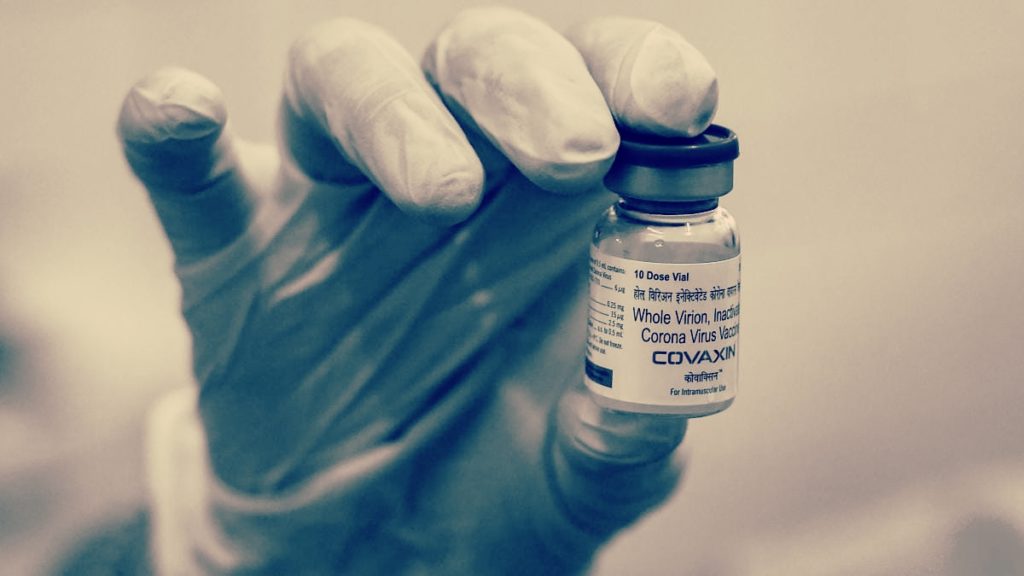 A vial of Covaxin. Representative image. (Photo by: PTI)

New Delhi: More than four months after the World Health Organisation (WHO) suspended the supply of Covaxin to UN agencies, its manufacturer Bharat Biotech has been unable to improve the manufacturing standards to satisfactory levels, The Wire can reveal.

The UN health body had withheld the supply of Covaxin to UN agencies on April 2, 2022, citing deficiencies in good manufacturing practices (GMP).

Replying to The Wire’s questionnaire on August 19, the WHO termed the Hyderabad-based company’s compliance, still, as ‘unacceptable’. After the suspension, Bharat Biotech submitted a Corrective and Preventive Action (CAPA) plan to the WHO on June 16 for an assessment. But the plan was not enough to convince the WHO about quality assurance.

“In summary, based on the said CAPA response, the manufacturing site for Covaxin is still considered to be operating at an unacceptable level of compliance with WHO Good Manufacturing Practices for Pharmaceutical Products guidelines,” WHO told The Wire.

Four months after the WHO inspection in April, the suspension still continues. “[Since the CAPA report has not been accepted] there is no ground to lift the suspension or to initiate any procurement for UN agencies,” the WHO said in its August 19 reply.

It also said that it had communicated a formal response to this effect on July 14 to Bharat Biotech as well as India’s drug regulator, the Central Drugs and Standard Control Organisation (CDSCO) and its head, the Drug Controller General of India (DCGI).

The GMPs are a set of standards that a pharmaceutical company is supposed to follow at its production sites once it has been granted a license after taking into account the efficacy and safety data generated through clinical trials. The WHO approved Covaxin and it received an ’emergency use listing’ (EUL) on November 3, 2021.

The GMP deficiencies were detected after the WHO team visited the Bharat Biotech facility in March. Responding to a set of questions in April, the WHO had told The Wire that the company had made some changes in manufacturing processes after the UN body had given a go-ahead to Covaxin. And, while doing so, the changes were not submitted either to the CDSCO or WHO for “evaluation and validation.”

The WHO guidelines for EUL clearly state: “If changes in the manufacturing process are introduced before the assessment is finalised or after the listing, these must be reported to WHO. [Emphasis supplied]”

But the WHO has not disclosed what changes were made to the manufacturing process by Bharat Biotech, citing the confidentiality clause. All it said in April, when the supply of Covaxin was withheld, was: “The inspections observation indicated that there are gaps in the quality assurance mechanisms.”

A GMP expert in vaccine manufacturing – who has worked with the Indian government – had told to The Wire that a change in the production process might have been introduced to increase the production of vaccine doses or maybe to reduce the quantity of raw materials.

It may be mentioned here that Covaxin is the only approved COVID-19 vaccine whose supply has been suspended by the WHO. The agency has approved 11 vaccines so far.

The WHO told The Wire in April and August that it had shared its inspection report with the country’s drug regulator – the CDSCO – and its head, the DCGI.

The Wire filed an RTI with the Ministry of External Affairs (MEA) on June 11, 2022, asking if it was aware of any UN agency inspectors arriving in India between February-April 2022. The WHO inspection happened in March.

The application also asked about the purpose of the visit and details of the report that was shared by the inspectors. The MEA transferred the application to the Union health and family welfare ministry. The latter replied to the RTI request on July 20, saying that there were no such records with the ministry. It said, “The information sought does not form part of the records held by the International Health Division of Ministry of Health and Family Welfare.”

And, thus, the application was disposed of without revealing which division could have the relevant information.

The CDSCO, which has a copy of the WHO report, functions under the health ministry.

Earlier, on April 6, 2022, the health and science journalist Priyanka Pulla filed an RTI application with the CDSCO, asking for a copy of the WHO report. The regulator also claimed that no specific information was available.

On 6 April '22, I filed an RTI asking CDSCO for a copy of the WHO inspection report, which found GMP deficiencies, necessitating a suspension of Covaxin procurement by WHO. The WHO said CDSCO officials accompanied them on the inspection. CDSCO's responses (1)

While the government has been dodging questions about the original WHO inspection report, the UN health agency has also shared its assessment of the company’s corrective plan with the CDSCO and DCGI. The UN health body told The Wire that it was standard practice to share the details only with the country’s regulator and the company – something it had done on July 14 this time – and not with anybody else, including the media.

The Wire wrote to the DCGI on August 19 asking what the WHO’s reservations with the corrective plan were. No response has been received at the time of publication.

The questions sent to DCGI as well as Bharat Biotech are appended below.

Can Covaxin lose WHO license?

The WHO granted EUL status to all COVID-19 vaccines on the basis of the reports of the respective drug regulators of countries. Owing to the pandemic’s nature, it did not conduct onsite inspections in early 2021. Therefore a ‘desk assessment‘ was carried out to ‘determine the compliance of the site with GMP’. And, as such, the WHO visited the Bharat Biotech facility for the first time in March this year.

It is not clear at the moment what could happen next. Currently, the WHO has unambiguously rejected Bharat Biotech’s response. While the company may have further scope to revise and respond, a revocation of the EUL by the WHO can’t be ruled out. The updated version of WHO’s EUL guidelines, issued this month, makes this clear. It says:

“[The] WHO reserves the right to issue an information notice for procurement agencies and relevant programs, if at any time, WHO deems that the EUL holder is not responding to a post-listing quality/safety issue in a timely and/or scientifically sound manner.”

“If quality/safety issues are identified post listing, WHO may seek advice from the TAG-EUL [WHO’s Technical Advisory Group-Emergency Use Listing]. If a quality/safety issue cannot be resolved to WHO’s satisfaction, WHO reserves the right to restrict or revoke the emergency use listing of the product.”

In fact, a few days after the WHO suspended the supply of Covaxin, news agency PTI quoted an MEA dispatch to India’s Covid Task force head, V.K. Paul, saying if the issue of quality assurance was not resolved quickly, the vaccine would lose the EUL. However, the next day, the the ministry claimed that it was quoted “out of context”.

Besides India, at least 12 more countries, mostly in Asia and Africa, have also approved Covaxin for inoculation. That may come under a question mark. Also, if the WHO’s approval is revoked, then many countries may not consider those jabbed with Covaxin as ‘vaccinated’.

But it is only in due course of time, depending upon the company’s response to the WHO’s assessment of its correction plan, that the full picture of the final outcome may not emerge.

Meanwhile, the company has recently submitted its clinical trial data to the DCGI for yet another COVID-19 vaccine – this time an intranasal one – and is awaiting consideration.