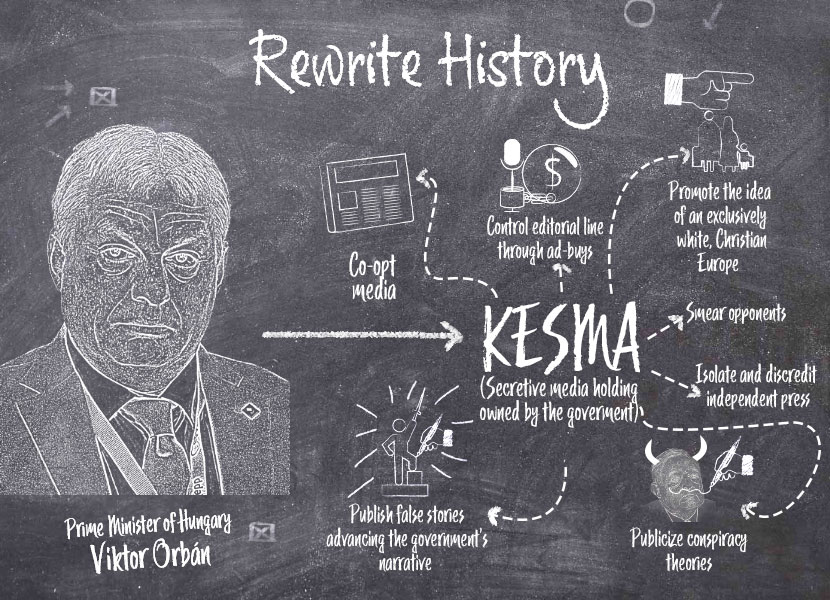 Editor’s note: This dispatch, published jointly with The Atlantic Magazine, explores another aspect of “Rewrite History,” a tactic from The Authoritarian’s Playbook.

BUDAPEST — For Attila Babos and Ervin Gűth, simply doing their job has been getting harder and harder. Their news website, Szabad Pécs, has won plaudits for its coverage of local news in southwest Hungary, from stories about a (consensual) relationship between a priest and a male high-school student to a municipality running out of money to pay its bills.

Now Szabad Pécs is feeling the pinch. Advertising revenues never took off, other outlets are replicating their scoops to cannibalize the web traffic (and income) that come with them, and social media is eroding their readership. The pair has to work on nonjournalistic research projects and lead crowdfunding campaigns just to afford their tiny 50-square-foot office.

And things seem likely to only get worse: The Hungarian government, led by Prime Minister Viktor Orbán, has been finding ever more creative ways to clamp down on the press, and the European Union—ostensibly an advocate of media freedoms—has been unable, or unwilling, to stop it.

For Szabad Pécs, the issue goes beyond not being invited to news conferences for Orbán’s Fidesz party, or having access to government officials restricted. The latest challenge comes instead from an organization called the Central European Press and Media Foundation. Better known by its Hungarian acronym, KESMA, it was hastily created last year and is now made up of hundreds of media outlets, most of them pro-Orbán newspapers that have benefited from substantial amounts of government advertising. Thanks to an artful application of EU rules, it has not been subject to antitrust restrictions or regulations designed to guarantee media pluralism.

The establishment of KESMA fits a pattern in Hungary. Orbán has explicitly advocated for “illiberal democracy” and used the tools of government to overhaul or restrict the power of an array of otherwise independent institutions, from the judiciary to opposition parties, NGOs to universities. In some ways, his efforts are not unusual—autocratic leaders the world over have taken similar measures. Yet Orbán has outsize importance, not simply because his country is an EU member state, but because he has widely been seen as a trendsetter, inspiring politicians elsewhere with both his actions and his rhetoric.

KESMA says on its website that its nonpartisan aim is to “strengthen Hungarian national consciousness” and ensure that young Hungarians “profess national values,” but its ties to Orbán are clear: The organization’s three-member board is chaired by Miklós Szánthó, the director of the Center for Fundamental Rights, a Budapest-based pro-government think tank; the other two positions are held by the Hungarian leader’s one-time personal lawyer, István Bajkai, and a former Fidesz candidate, Zoltan Hegedus.

The foundation either fully owns or controls a majority stake in at least 476 outlets, according to the Budapest-based watchdog Mertek Media Monitor. Almost all of these are staunch defenders of the government’s policies, publishing an array of articles with little, if any, factual basis that paint Orbán and his colleagues in a positive light, or which support the Hungarian leader’s narrative: Recent stories suggest that the American actor Scarlett Johansson supported the mayor of Budapest, a Fidesz member; that the Hungarian-born billionaire and philanthropist George Soros, a frequent target of Orbán’s, was the de facto leader of the EU; and that a large group of migrants from Greece was en route to Hungary. Other pieces promote Orbán-allied politicians abroad, including France’s Marine Le Pen and Italy’s Matteo Salvini.

KESMA’s creation has amplified worries about media consolidation in Hungary, particularly when it comes to outlets supportive of Orbán. Since he returned to power in 2010 (he had an earlier stint as prime minister), Orbán has consistently sought to curtail the media in his country: Hungary has fallen in Reporters Without Borders’ press-freedom index each of the past seven years, dropping 31 spots in that time to 87th overall.

These outlets are not only more in keeping with the government’s rhetoric but also dependent on its purchasing power: Since 2010, the Hungarian government has spent more than $300 million on advertising campaigns to promote its policies, according to the investigative website Atlatszo. Along with attempting to sway public opinion, those funds help pro-government outlets survive—Ágnes Urbán, a Mertek economist, told me that the majority of KESMA organizations would not be financially sustainable without the state’s advertising. In a report commissioned by the European Parliament’s Green group, Mertek found that more than half of KESMA-owned outlets’ advertising revenues came from the Hungarian government. (This use of advertising budgets has another pernicious effect, Babos and Gűth of Szabad Pécs argue: Private businesses are reluctant to advertise in non-KESMA outlets, fearing government retaliation, such as preclusion from lucrative contracts.) Mertek says that these funds constitute a form of state subsidy that is illegal under EU law.

Hungary insists KESMA’s creation did not violate any such rules, nor create any conflicts of interest, despite the relationships between Orbán and members of the foundation’s board. Zoltán Kovács, the Hungarian government’s spokesman for international affairs, told me KESMA amounted to “critical infrastructure,” and aligned with a government priority that Hungarian newspapers be owned by Hungarian nationals. When it created KESMA, the government announced that it was in the national strategic interest, and thus not subject to EU rules or further scrutiny.

Further distressing press-freedom advocates is the EU’s own reluctance to crack down on Orbán—to go beyond critical rhetoric and to police its stated values. When KESMA was created, Frans Timmermans, the EU official then responsible for promoting the rule of law, represented it as a “worrying development” and in February, the European Commission, the bloc’s executive arm, described the group in a memo as “controlled by the government.” (The document was included in a cache of memos and reports released to me as part of a freedom-of-information request to the commission that has only partly been fulfilled. I have appealed, in particular, to receive full copies of otherwise redacted documents.) A separate report for the commission compiled by the Center for Media Pluralism and Media Freedom, a research institute based in Florence, Italy, argued that KESMA has “exacerbated” risks to media pluralism in Hungary. One of the report’s authors, Elda Brogi, told me that KESMA’s outlets risked being seen as “puppets of political parties.”

Yet beyond raising concerns and assessing the risks, the commission—which has significant powers within the EU to investigate mergers, illegal subsidies, and monopolistic behavior—has declined to officially probe whether KESMA complies with EU law. “On the basis of the available information, the creation of KESMA itself … falls outside the commission’s jurisdiction under the EU media regulation,” one memo, drafted by the commission’s competition officials and released to me, said. The commission declined to provide further documents that outlined its internal assessments of KESMA—or of whether Hungarian-government advertising could be considered an illegal subsidy—arguing in a letter that publishing such documents would undermine “the future procedural steps the commission may consider, as well as its investigative strategy.”

This inaction regarding Hungary’s democratic backsliding is mirrored by other European institutions. Within the European Parliament, Fidesz is part of the right-of-center European People’s Party, which also includes German Chancellor Angela Merkel’s party, as well as the parties of the Irish leader Leo Varadker and both the current and former presidents of the commission. In recent years, though, the EPP had done little more than offer moderate criticism of Fidesz, before finally suspending the party from the group in March. The only real pressure against Hungary has come in the form of what are known as Article 7 procedures, under which the EU scrutinizes the rule of law in a member state. Members of the European Parliament voted in September 2018 to undertake such efforts (KESMA had not yet been officially created at the time, though MEPs included press freedoms in their list of concerns).

“By joining the European Union, Hungary accepted the fundamental values of the union—and, of course, freedom of the press belongs to these fundamental rights,” Sven Giegold, a German MEP belonging to the Green Party, told me. “Viktor Orbán is systematic in dismantling the plurality of the media.”

If 22 of the EU’s 27 other member states agree there is “a clear risk of a serious breach,” then Budapest could be stripped of its voting rights in the Council of the European Union—the main body where EU leaders meet for discussions—and sanctions will be brought against the 21 Hungarian MEPs. A similar move was triggered against Poland in December 2017.

But European countries have dragged their feet with Hungary’s Article 7 investigation, reluctant to question a fellow member state over an issue—media policy and regulation—that many European governments believe is a national matter. Were they to carry out an aggressive inquiry, that could set a precedent for investigations into their own domestic issues, many worry. Thus far, only two (closed-door) hearings have been held about the issue. In the first, according to minutes of the meeting, Swedish representatives did question their Hungarian counterparts over KESMA and other press-freedom issues. At the second, on December 10, German and Danish officials raised their own concerns, according to three diplomats who asked not to be identified so they could discuss private sessions. Both times, Hungary rebuffed any questions.

A small but growing number of voices—including the Green bloc in the European Parliament, and NGOs such as Reporters Without Borders—are calling for greater EU-wide efforts to restrict media consolidation, and to promote transparency in the ownership of media outlets, but it is unclear if these will gain any traction. Thus far, the commission has limited itself largely to providing funding for investigative journalism, promoting media literacy, and helping build regional networks among journalists.

In the case of Hungary, it appears that KESMA will endure, to the chagrin of journalists like Babos and Gűth. “Viktor Orbán wants to preserve a tiny version of a democracy,” Babos told me. “People protest, and some newspapers can still write bad things about the prime minister, so it allows Orbán to say, ‘See? There is no threat to democracy.’” Yet the truth, he lamented, is that “there is no more press freedom in Hungary.”

Ludovic Lepeltier-Kutasi contributed to this story.

A version of this story appeared as “Europe’s Failure to Protect Liberty in Hungary” on The Atlantic on Dec. 29, 2019