ON THE GROUND IN LANARE, CA 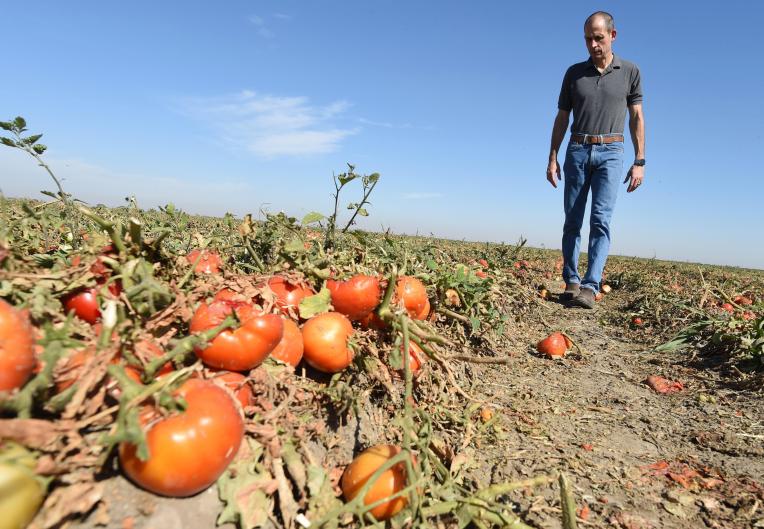 Cannon Michael, President of Bowles Farming Company in Los Banos, walks through a field that has been harvested but some tomatoes are left behind. In October 2019, he was working with food banks to try to distribute surplus produce. (Photo by John Walker/The Fresno Bee)

LANARE, CA — Last month a volunteer at a rural Fresno County food bank packed cardboard boxes of vegetables, rice and beans into the trunks of 210 cars — mostly belonging to families who worked in the fields surrounding Lanare, picking and packing produce.

The line had doubled from the week prior and Isabel Solorio, a volunteer, had to turn away five families because she’d run out of food.

“This is a country that has everything,” Solorio said in Spanish. “So where has the food gone?”

For decades, the San Joaquin Valley has led food production in the United States as locals — agricultural laborers — themselves battled hunger. The eight-county region is among the most agriculturally concentrated in California, where the majority of the nation’s food is produced. But, according to a 2017 report by Feeding America, the nation’s largest domestic hunger-relief organization, 13.5% of families here are food insecure, meaning in the last year they struggled to buy the food they needed to stave off hunger.

Before the coronavirus pandemic, the Central California Food Bank served about 280,000 families a year, an already staggering figure. Now, need has spiked between 40% and 100% at their distribution centers (too strained to maintain records, they explained), including where Solorio volunteers, leaving the very people who feed the nation to face starvation.

Distribution is at the core of the problem: about half of the food grown in the U.S. normally goes to schools and restaurants, and redirecting all that food towards grocery stores is nearly impossible, as packaging varies wildly as does need. The millions of pounds of lemons that complimented people’s drinks, and the chopped romaine awaiting a well-rounded eater at the salad bar, have nowhere to go. As the pandemic shut down schools and restaurants, Solorio’s husband saw two fields of lettuce destroyed and put back into the ground. The farm normally sold that produce to restaurants, but was left without customers as the pandemic ground business to a halt.

So farmers across the country pour raw milk down the drain and kill off cows, chickens and hogs. Production plants that normally process raw milk into bottles, butter and cheese are operating at capacity and meatpacking factories across the country have shuttered in the wake of growing coronavirus cases and safety concerns for workers.

Like grocery stores, food banks can’t take a huge slab of butter or a 5-pound bag of romaine, but they also have cost issues; while California farmers get a tax credit and some money for their donated produce, that rarely covers the cost of labor. Hiring a handful of workers to pick a field of lettuce for donation will cost more out of the farmer’s pocket than the food bank can repay. So they let it rot.

The federal government has pledged to pump $19 billion to farmers in response to the crisis, and Governor Gavin Newsom announced $3.6 million in aid to food banks, to supplement their purchase from California farms, coupled with a philanthropy pledge of $15 million. A new bill would give $25 million to farms across the country to get more food to hungry families.

But farmers compared the billions in federal funding to a bandaid patching an open bullet wound. Some Fresno farms have lost millions already and farmers across the country have started filing for bankruptcy.

According to Solorio, the prospects for food banks look better, at least. On May 12, she was able to pack produce-laden boxes into the trunks of 182 cars, a drop attributed to many of the farmworker families she serves going back to work, as the supply chain readjusts to the new reality.

But going to work also means risking exposure to the virus. And for the Central Valley’s communities, and its rural areas in particular, that comes at a higher price because it suffers from a shortage of doctors and hospitals, resulting in poorer health conditions. About 11.3% of Fresno County has asthma, 3% higher than the statewide rate, and about a third of Valley residents are obese — a consequence of food insecurity — compared to about a quarter of all Californians. The prevalence of these chronic illnesses make its COVID-19 cases more severe.

For the roughly 120,000 undocumented immigrants who live in the San Joaquin Valley, “it’s a health disadvantage now on steroids,” according to Phoebe Seaton, co-founder and co-director of Leadership Counsel for Justice and Accountability.

She said people are less likely to seek medical help if they are concerned about immigration enforcement, a common phenomena across the country. In general, the virus has magnified the reality that undocumented immigrants are simultaneously illegal and essential.

Fresno activist Lilia Becerril said in April she laments the inability of undocumented people to access the government assistance offered to the rest of the country, like the $1,200 relief check or even food stamps. Undocumented immigrants are ineligible for federal coronavirus relief and, under the public charge rule, could be denied citizenship if they rely on government assistance like food stamps or public housing.

Becerril has helped over 200 families to date pay their bills and put food on the table, with an average of $50 per family through donations to her Facebook page, Unidos por un Fresno mejor. She said most of the people making donations are those who are in difficult situations themselves.

“I’ve lived through this poverty,” she said. “I get a knot in my throat. We’re workers. We pay our taxes. We are good people.”

Manuela Tobias covers poverty and inequality in the Central Valley for The Fresno Bee. This dispatch is part of a series called “On the Ground” with Report for America, an initiative of The GroundTruth Project. Follow her on Twitter: @manuelatobiasm.