ON THE GROUND IN WINTON, CA 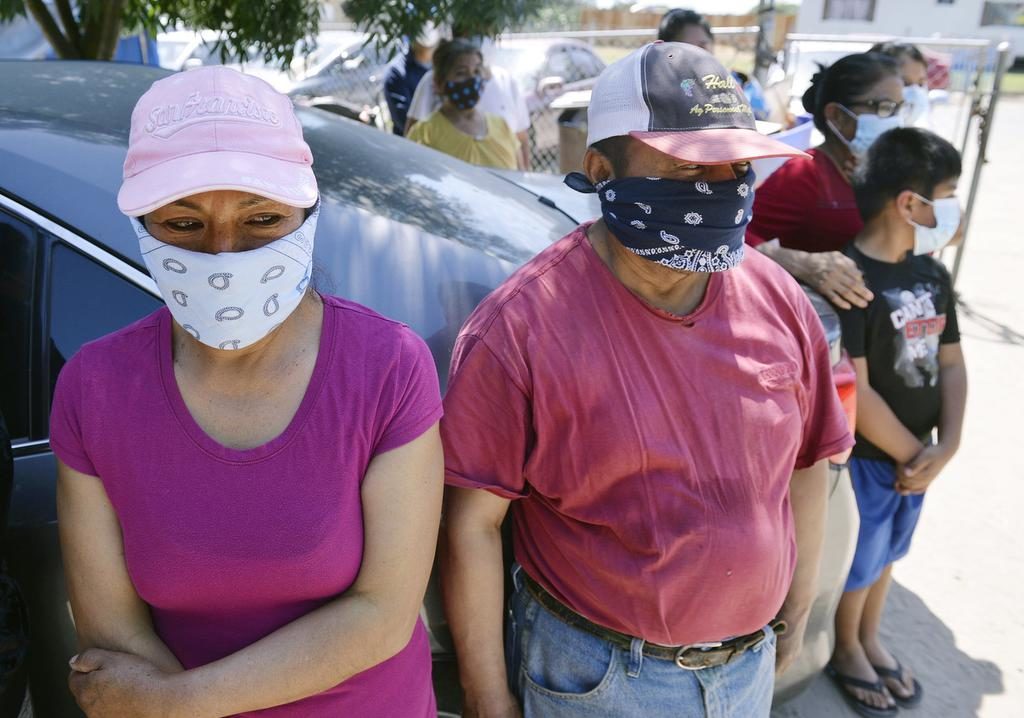 Many migrant agricultural workers such as Hugo Garcia call this small town, a few miles north of Merced, home. Garcia has worked at an almond processing plant in the region for more than 16 years, but he saw his life upended this year when he and his entire family contracted COVID-19.

Garcia, sitting in the home he shared with his 85-year-old mother, said he worked shoulder-to-shoulder with more than two dozen workers in an area that was shut down after nearly everyone tested positive for COVID-19. He tested positive June 16 and quickly spread the virus to his mother and other family members.

Garcia’s symptoms were mild and he recovered, but his mother, Sinforosa, died after more than three weeks in the hospital. He had to make the agonizing decision to take her off life support when doctors said she wouldn’t recover.

“She had a 1% chance of living; she wasn’t going to make it,” he said in Spanish. “She was only suffering at that point.”

Against the advice of health officials, county leaders abandoned contact tracing, saying the spread of the virus was “too wide” for it to be effective. So, despite a confirmed diagnosis, no one from Merced County asked Garcia about who he came in contact with.

Garcia’s situation is far from unique. Farms and processing plants across the region have reported alarming COVID-19 outbreaks, leading to a disproportionate rate of cases among the Latino and migrant community.

Categorized as a high-risk group for COVID-19, Latinos make up 39% of the state population, but they represent 57% of coronavirus cases in California and 46% of deaths. About 90% of the state’s agricultural laborers are Latino.

Farmworkers, who endure extreme heat and pesticide exposure daily, continue to work grueling hours standing shoulder-to-shoulder in processing centers across the state, often shuffling to and from the fields in clusters, then going back home to close quarters.

As cases surged, California focused efforts to combat the spread among Latinos and migrant farmworkers in the Central Valley by allocating an additional $52 million in federal funding to the region and deploying three teams of health and safety workers.

But those dollars are running out, and experts say there’s enough to provide aid for only 150,000 people. Latino leaders in the Valley are calling for more state action.

Kings County Supervisor Richard Valle, who grew up in a farmworker community, helped draft a letter to state leaders asking for more financial assistance as well as protective equipment, mobile testing sites and translation services for workers. He said farmworkers need the same protection and support as public safety and medical workers.

South of Merced County, in the secluded Kings County town of Avenal, Rosa Barajas, a line worker at an onion processing plant, worried about getting sick. But earning only $12 an hour, she couldn’t afford to take days off.

She said she worked more than eight hours a day standing next to a dozen co-workers without masks or gloves and in cramped quarters. Coworkers began to get sick, and Barajas, a mother of two, started to feel unbearably tired.

In a few days, she suffered from congestion and bone-chilling aches. Then a coworker died, terrifying Barajas, who is diabetic and has hypertension.

“Everything started feeling worse and I couldn’t even breathe,” she said. “I thought I was getting better, then it would start all over again. I prayed to God to take me because I felt like I couldn’t go through with it anymore.”

California’s $50 billion agricultural industry depends on workers like Garcia and Barajas, about 60% of whom are unauthorized to legally work in the U.S., according to a recent study.

Considered essential workers by the Centers for Disease Control and Prevention, their undocumented status disqualifies them from unemployment, access to health care services and safety net programs put in place to help residents during the pandemic. They also don’t receive family sick leave if exposed to the virus.

Valle, the Kings County supervisor, knows how hard migrant laborers work to put food on the table for Americans and for their families. His grandparents used to take their five children, including his mother, to the fields where they picked grapes during the hundred-degree summers in Selma, Calif. They worked long hours while the kids played, then drove home, made dinner, put the children to bed and woke up at 4:30 a.m. the next day to do it all over again.

“I feel obligated because I wouldn’t be here if it wasn’t for my (grandparents) working in those fields,” he said. “So we owe it. I can’t sit here knowing that farmworkers are not getting protection while in the middle of a pandemic.”

Nadia Lopez covers Latino Communities for The Fresno Bee. This dispatch is part of a series called “On the Ground” with Report for America, an initiative of The GroundTruth Project. Follow her on Twitter: @n_llopez.

A version of this story appeared on USA TODAY on September 3, 2020